The sidesplitting and thought-provoking comedy tells the story of the unscrupulous, moneygrubbing, and morally bankrupt lawyer Sammy Campo (portrayed to perfection by a convincingly sleazy and hilarious Alexander) and his conniving quest for salvation. During a near-death experience, he is threatened with eternal damnation and the tortures of hell by the apparition of his childhood teacher, now a fervently reproving angel (Lupone). Once resuscitated, he plots to save his soul (assuming he has one and hell might actually exist), by pretending to be a decent person and doing a few good deeds to score points with the powers that be.

To advance his plot, he contacts his ex-wife Tracy (Justina Machado), whom he divorced ten years prior for getting fat – not realizing that she was pregnant with Caspar (Julian Emile Lerner), a son he’s never known – and teams up with her priest Father Michael (Fontana) to help Edna (Carol Mansell), a distraught elderly widow threatened with eviction by the cold-blooded insurance agent Jackson (Michael Mastro), whose character provides a reflection of Sammy’s own corrupt self.

But as Sammy gets to know his son, he unwittingly provides some good advice for the misbehaving boy to follow. And he discovers that Father Michael, too, is questioning his religious beliefs and the strictures imposed by the Church and his Monsignor (McKean). As the priest struggles to do the right thing and to provide the assistance Edna needs, he searches his soul while debating the existence of God and the importance of faith (with the Monsignor providing a provocatively cynical reason to believe, in one of the most clever passages of Ulin’s entertaining script). Will they regain their integrity, gain salvation, and become sincerely decent people and true believers in the end?

Rounding out the terrific top-notch cast are Lorette Devine as Sammy’s secretary Della, Josh Johnston as his doctor, Bianca LaVerne Jones as Caspar’s school principal, and Elizabeth Stanley as Chandra, the woman he sends to entrap Jackson, so that he can blackmail him into paying Edna the life insurance of her late husband and prevent her from losing her home.

Judgment Day is smart, funny, and provocative, well written and masterfully performed. Thanks are due to BSC for reviving this heavenly online gem.

Running Time: One hour and 23 minutes. 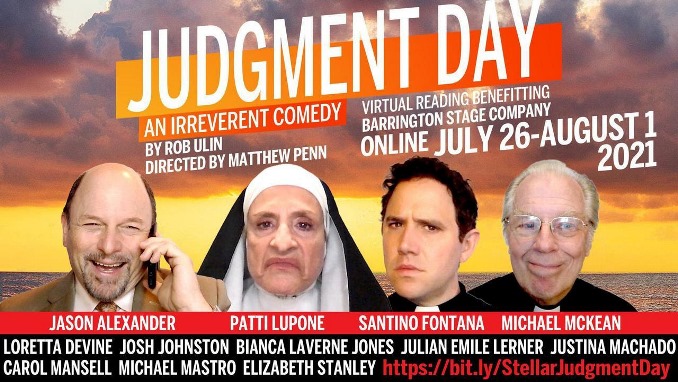 For a preview of the show, watch a trailer from last year’s premiere streaming: