At the beginning of his career in 1982, playwright and director James Lapine met legendary Broadway composer and lyricist Stephen Sondheim. Shortly thereafter, they decided to write a musical together, inspired by French Pointillist painter Georges Seurat’s masterpiece of 1884-86, A Sunday Afternoon on the Island of La Grande Jatte. The resultant work, Sunday in the Park with George, which opened at Broadway’s Booth Theatre on May 2, 1984, went on to win the Pulitzer Prize for Drama, two Tony Awards, eight Drama Desk Awards, and the New York Drama Critics’ Circle Award for Best Musical.

On Tuesday, August 3, at 7:00 pm, the decades-long collaborators and friends will come together for the livestream discussion Putting It Together: An Evening with James Lapine and Stephen Sondheim. Presented by The Town Hall, the special digital event celebrates that day’s release of Lapine’s new book Putting It Together: How Stephen Sondheim and I created Sunday In The Park With George (Farrar, Straus, and Giroux), in which Lapine gives a behind-the-scenes look at the first of their collaborations, chronicling their two-year journey in the making of the iconic musical. Told through conversations between Lapine and Sondheim, and with most of the production team, the first-hand remembrances of the highs and lows of that odyssey are illustrated with personal photographs, sketches, script notes, and sheet music from the show. 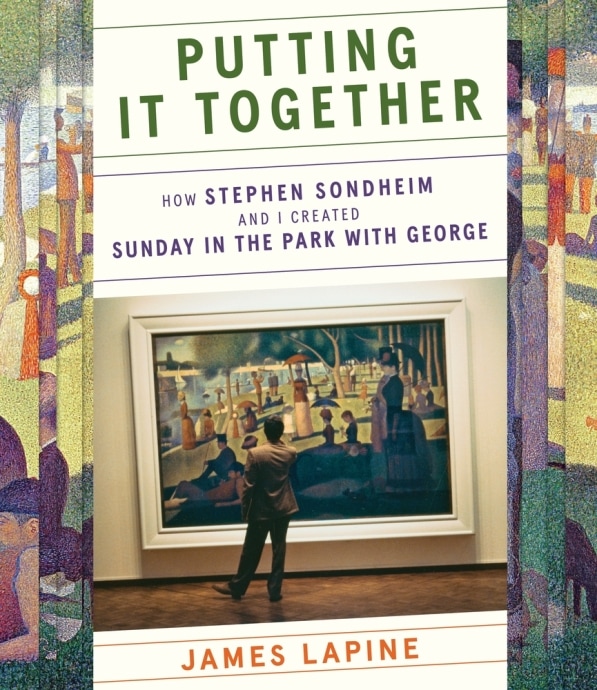 Moderated by award-winning actress of the stage and screen Christine Baranski (an original cast member of the Off-Broadway production of Sunday In The Park With George at Playwrights Horizons), the virtual Town Hall conversation about the book will feature special guest appearances by luminaries Mandy Patinkin and Bernadette Peters, who starred in the premiere Broadway production, sharing their own memories of the acclaimed groundbreaking musical.

“The Town Hall is so excited to have the two original stars of Sunday In The Park With George, Mandy Patinkin and Bernadette Peters, share in this very special evening with James Lapine, Stephen Sondheim, and Christine Baranski,” said Artistic Director Melay Araya. “Viewers can expect some fun behind-the-scenes stories during the creation and run of the show, and witness the reunion of these five theater icons.”

Putting It Together: An Evening with James Lapine and Stephen Sondheim streams live on Tuesday, August 3, at 7 pm, with The Town Hall. For tickets (priced at $45 for a ticket/book bundle for domestic audiences, $60 for the ticket/book bundle for international audiences, and $25 for the livestream without a book), go online. Copies of Putting It Together are provided by the Strand Book Store.