Theaters across the greater Washington, DC, area have united to provide the highest level of public safety for their audiences, artists, staff, and volunteers, by requiring that their audiences provide proof of vaccination to attend all live public performances at their indoor venues.

These theaters are committed to the safety of all who work, perform, and visit their venues, and invite audiences to join in the effort to slow the spread of COVID-19. In addition to audiences, these theaters have mandated COVID vaccinations for performers and theater staff.

ATTENDING A SHOW: Patrons must show proof that they are fully vaccinated at the time of their entry into the theaters through December 2021. This end date is subject to change and will be re-reviewed by aligned venues in October. Masks will also be required for audiences inside the theater, except while eating or drinking in designated locations.

EXEMPTIONS: Theaters will offer exemptions for those unable to be vaccinated, such as children under 12, people with certain medical conditions preventing vaccination, or those with closely held religious beliefs that prevent vaccination. These patrons must provide proof of a timely negative COVID-19 test—as defined by each venue—before performance start time.

To learn more about additional policies and procedures designed to protect the health and safety of everyone, patrons are encouraged to learn more at each organization’s website or at TheatreWashington.org. Theatre Washington, the area’s alliance of theater organizations, theatermakers, and theater supporters, will serve as a hub of information for participating venues and their vaccination requirement policies.

ABOUT THE UNITED THEATERS

Arena Stage at the Mead Center for American Theater, under the leadership of Artistic Director Molly Smith and Executive Producer Edgar Dobie, is a national center dedicated to American voices and artists. Arena Stage produces plays of all that is passionate, profound, deep and dangerous in the American spirit, and presents diverse and ground-breaking work from some of the best artists around the country. Arena Stage is committed to commissioning and developing new plays and impacts the lives of over 10,000 students annually through its work in community engagement. Now in its seventh decade, Arena Stage serves a diverse annual audience of more than 300,000. arenastage.org

The cultural anchor of the H Street, Northeast, Atlas Performing Arts Center is a non-profit performing arts venue that fosters and presents stellar art in film, dance, music, theater, vocal and choral work, spoken word, and beyond. We produce the INTERSECTIONS Festival that hosts close to 400 artists and performing groups, engaging thousands of patrons in a multi-week long celebration, and we provide arts education through our City at Peace youth development program. We support and partner with DC arts makers – our Arts Partners – including Capital City Symphony, Mosaic Theater Company of DC, Joy of Motion Dance Center, and Step Afrika! Our mission is to bring people together through the arts to expand the reach and strengthen the bonds of our community.  We provide shared space in a creative environment that inspires exceptional performances, events, and initiatives that enlighten, entertain, and reflect the best of the arts and our humanity.

GALA (Grupo de Artistas Latinoamericanos) Hispanic Theatre preserves and promotes Latino arts and culture, sharing this rich heritage with a wide, diverse audience and using theater as a vehicle for social change. By developing, producing, and performing works that explore the breadth of Latino performing arts, GALA provides opportunities for Latinx artists, trains Latinx youth, and engages the entire community in a dynamic exchange of ideas and perspectives. Since it’s founding in 1976, GALA has produced over 275 plays and musicals in Spanish and English, offered dance and music programs to a broad public, and provided performance opportunities to hundreds of multicultural youth. Recognized locally, nationally, and internationally for its artistic excellence, GALA makes its productions accessible to all segments of the community. Further, GALA’s innovative international cultural exchanges introduce area audiences to outstanding artists from Latin America, the Caribbean, Europe and around the world.

Since its founding in 1996, The Keegan Theatre has presented vibrant productions of classic and modern plays and musicals, bringing a wide range of theater works to compelling life with the highest caliber acting and design, and a focus on intimate and authentic storytelling.  Keegan’s unique and welcoming 120-seat theater is nestled in the lively Dupont Circle neighborhood, and the company’s mission is centered on connection:  “To take audiences to the vital heart of the theater experience: extraordinary artists in an intimate setting exploring the human condition. To foster connections and positive change in our community through vigorous, inclusive, empowering education and outreach.”  Keegan Theatre kicks off its 25th Anniversary Season in 2021-22 with GOOD PEOPLE by David Lindsay-Abaire.

In 2015 Mosaic Theater Company’s diverse roster of staff, donors, artists and Board members began building a mission-driven theater focused on intercultural narratives and social justice issues. Mosaic Theater champions the development of new work and serves as an incubator for stories often unseen on US stages including Hooded, Or Being Black for Dummies, Queens Girl in Africa and Twisted Melodies. The Company is the resident theater at the Atlas Performing Arts Center on H Street NE. Mosaic received the John Aniello Award for Outstanding Emerging Theatre Company from the Helen Hayes Awards in 2017. The current season begins October 25 with Anna Ouyang Moench’s Birds of North America and includes plays by Benjamin Benne, Jackie Sibblies Drury, Mona Pirnot and Andrew W. Mellon Playwright-in-Residence Psalmayene 24. The 2022-23 Season will feature a project shuttered by the pandemic: the World Premiere of Ifa Bayeza’s The Till Trilogy.

Round House Theatre is one of the leading professional theatres in the Washington, D.C. area, producing a season of new plays, modern classics, and musicals for more than 40,000 patrons each year at our theater in Bethesda. Round House has been nominated for 197 Helen Hayes Awards and has won 37, including four Outstanding Resident Play Awards and the Charles MacArthur Award for Original New Play in 2016. Round House’s lifelong learning and education programs serve more than 5,000 students each year at its Education Center in Silver Spring, in schools throughout Montgomery County, and at our Bethesda theater. Cornerstone programs include Free Play, which provides free tickets for students age 13-college; the Teen Performance Company, which culminates in the student-produced Sarah Metzger Memorial Play; Summer Camp for students in grades K-12, and a full slate of classes for adults and youth. www.RoundHouseTheatre.org

Led by Artistic Director Simon Godwin and Executive Director Chris Jennings, the Shakespeare Theatre Company (STC) is the nation’s premier classical theater company. STC has become synonymous with artistic excellence and making classical theater more accessible to audiences in and around the nation’s capital, building on the foundation laid by Founding Artistic Director Michael Kahn. Recipient of the 2012 Regional Theatre Tony Award, STC’s mission is to create innovative productions that inspire dialogue and connect classic works to the modern human experience. The Company focuses on works with profound ideas, complex characters and poetic language written by Shakespeare and others—ambitious, enduring plays with universal themes—for all audiences. Located in downtown Washington, D.C., STC performs in two theaters, the 451-seat Michael R. Klein Theatre at the Lansburgh and the 761-seat Sidney Harman Hall. The Company has been a fixture in the vibrant Penn Quarter neighborhood since 1992. https://www.shakespearetheatre.org/

Signature Theatre is widely recognized as the premiere venue in Washington to see musical theater, especially new musicals. Called “a dream for patrons” and “the gold standard for producing musicals” by The Washington Post, Signature is renowned for its interpretations of Stephen Sondheim’s work, inventive adaptations of overlooked or forgotten musicals, and investment in fresh new projects. The Theatre is an industry leader in developing and producing new work and since its inception has produced 59 world premiere works. Under the leadership of Maggie Boland, Managing Director, and Matthew Gardiner, Artistic Director, Signature has been cited for its achievements by a wide range of local and national media, draws more than 100,000 patrons annually to its Arlington home and has been leader in digital/streaming productions with viewers from all 50 States, plus Puerto Rico, the District of Columbia and over 20 other countries.

Studio Theatre is Washington’s premier venue for contemporary theater, “where local audiences will find today’s edgiest playwrights” (Variety). One of the most respected midsized theaters in the country, Studio produces exceptional contemporary drama in deliberately intimate spaces. Drawing inspiration from great ensembles—where people work together with a spirit of generosity and professional rigor—Studio brings characteristic thoughtfulness and daring to its work onstage and off, through its new work incubator and engagement, education, and workforce training initiatives. Studio serves nearly 75,000 people each year, including more than 1,000 youth and young adults through community engagement initiatives. Founded in 1978, the quality of Studio’s work has been recognized by sustained community support, as well as 72 Helen Hayes Awards for excellence in professional theater.

Synetic Theater, founded in 2001 by Georgian immigrants Irina and Paata Tsikurishvili, is located in the National Landing neighborhood of Arlington, VA. Synetic’s mission is to create unforgettable visceral narrative experiences for every audience by blending visual techniques and movement from around the world and training multidisciplinary artists of all ages. Our 2021/22 season opens with The Madness of Poe, a trilogy of short stories by Edgar Allan Poe, and continues with a new adaptation of Cinderella and The Servant of Two Masters. Synetic has consistently produced highly acclaimed plays since its inception, having received a total of 34 Helen Hayes Awards and 143 nominations to date and critical acclaim from publications such as The Washington Post and Washington City Paper. Most recently, we were nominated to the Virginia School Boards Association 2021 Business Honor Roll for our exceptional support of Fairfax County Public Schools during the pandemic.

Founded in 1990 as a program of the Edlavitch DC Jewish Community Center, Theater J has become “the nation’s most prominent Jewish theater” (American Theatre Magazine).  The theater we produce celebrates, explores, and struggles with the complexities and nuances of both the Jewish experience and the universal human condition. Our work illuminates and examines: ethical questions of our time, inter-cultural experiences that parallel our own, and the changing landscape of Jewish identities. We aim to preserve and expand a rich Jewish theatrical tradition and to create community and commonality through theater-going experiences. Theater J presents a wide variety of recognizable, under-explored, and new works from the Jewish theatrical cannon, plays that often investigate stories of immigration, language, assimilation, oppression, religion, and otherness, and extend a heartfelt invitation to our community to better understand what it means to be Jewish. Leadership: Adam Immerwahr, Artistic Director; David Lloyd Olson, Managing Director.

Woolly Mammoth Theatre Company is “the hottest theater company in town” (Washington Post); priding itself on developing, producing, and making theater that disrupts conventional processes and stimulates transformative experiences. For almost four decades, Woolly has held a unique position at the leading edge of the American theater, earning a reputation for staying “uniquely plugged in to the mad temper of the times” (New York Times). The co-leadership of Maria Manuela Goyanes (Artistic Director) and Emika Abe (Managing Director) is supported by a core company of artists that holds itself to a high standard of artistic excellence. Woolly is relentless in its desire to take risks, experiment, innovate, interrogate, and create a radically inclusive community. Located in Washington, D.C., Woolly Mammoth stands upon occupied, unceded territory: the ancestral homeland of the Nacotchtank whose descendants belong to the Piscataway peoples. 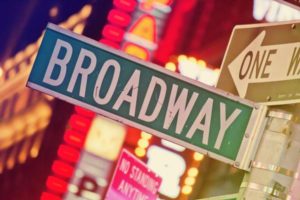 All of Broadway to require proof of COVID vaccination
by Deb Miller (July 30, 2021)