The Little Theatre of Alexandria‘s 2021-2022 season is underway, and this season is one of their most daring and dynamic yet. Productions include Neil Simon’s Rumors, August Wilson’s Fences, Wait Until Dark, A Christmas Carol, Bright Star, Blue Stockings, and Prelude to a Kiss. The company is also operating with new changes implemented to protect audiences, performers, and staff. You can find the details of their safety precautions here. 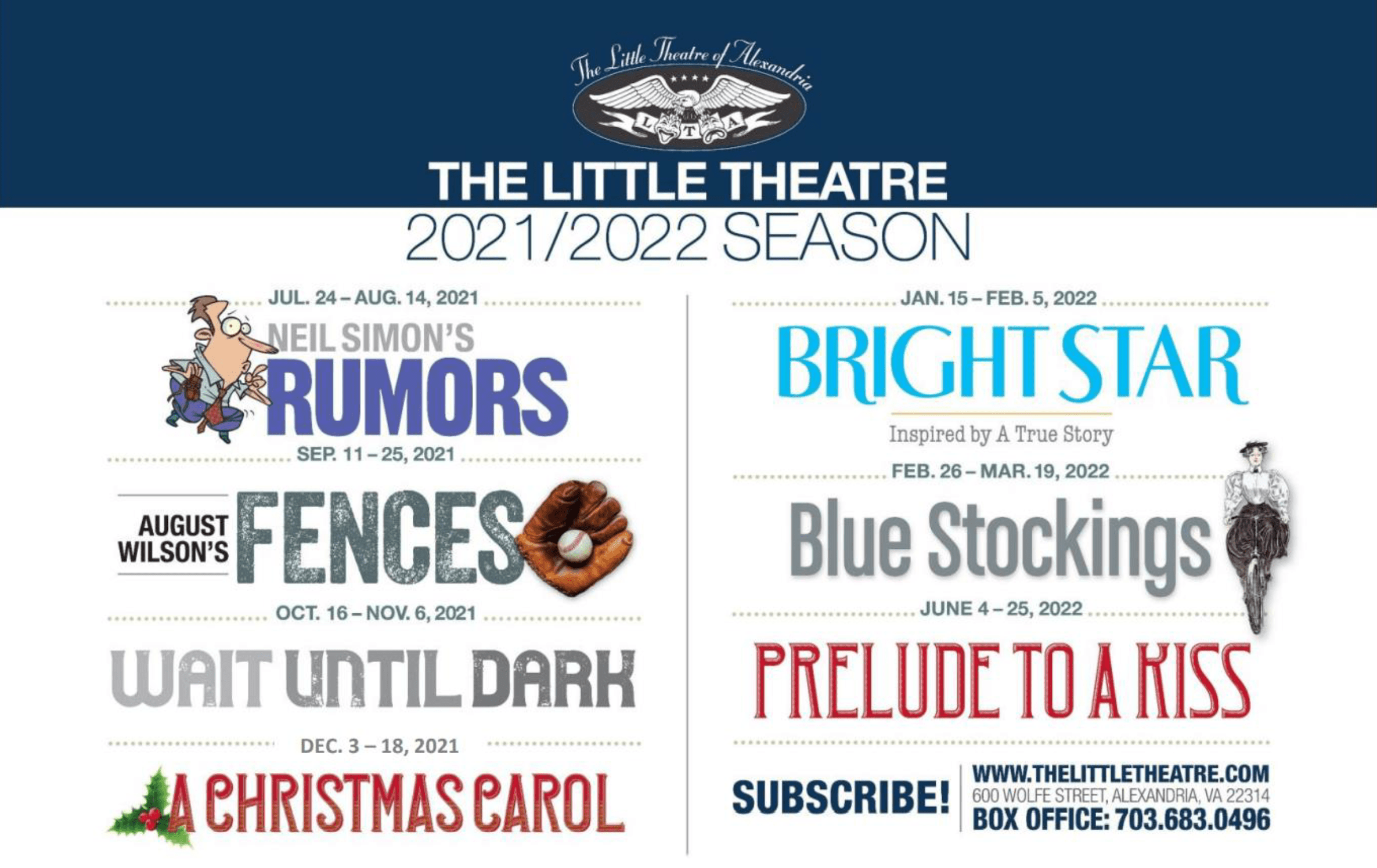 When Neil Simon needed a good laugh, this is the play he wrote! Join LTA for this first-rate farce with plenty of physical comedy, high-octane energy, and loaded with classic Neil Simon wit. It begins with three couples as they arrive at an upper-crust Manhattan anniversary party to discover that their host (the Deputy Mayor of New York), has accidentally maimed himself. Watch as the couples go to outrageous lengths to keep the police and press from finding out the truth. Don’t miss this gem of a comedy! Show disclaimer: Please be aware that this production contains adult language and there will be a loud noise/gun shot. *All patrons are required to wear a mask (even if vaccinated) for the duration of the performance.

This Pulitzer Prize winning drama, which also won the Tony Award for Best Play, is set in the segregated 1950s, where we meet Troy Maxson, a former Negro League baseball star now scraping by as a sanitation worker. Fences explores the walls we build around ourselves and our loved ones, while also illuminating one family’s struggles in a racist society. Show disclaimer: This production contains adult themes and strong language.

Set against the socially turbulent 1960s, this play follows the story of Suzy, a blind woman who, while left alone in her apartment, becomes embroiled with a group of con men hatching an elaborate scam. As the tension mounts, Suzy must fend for herself, but the phone line is cut and the house is plunged into darkness. Can Suzy outwit her murderous visitors?

LTA rings in the holiday season with a return of the classic by Charles Dickens. Ebenezer Scrooge, a miserly Victorian humbug, travels with ghostly guides through Christmas past, present, and future to find the true meaning of the holidays. Complete with special effects, Victorian carols, and Tiny Tim. A Christmas Carol is a must for the entire family!

This Tony Award nominated musical, created by comedy legend Steve Martin and Grammy winner Edie Brickell, is a sweeping tale of love and redemption set in the American South during the 1920s and 1940s. This emotional story weaves two chapters in the life of literary editor Alice Murphy and an ambitious young soldier just home from World War II. Their connection helps discover a stunning secret with the power to transform their lives. This original and hopeful musical, based on a true story, is propelled by a rousing country and bluegrass score. Don’t miss it!

What does it take to accomplish social change? This historical drama, which premiered at Shakespeare’s Globe Theatre in London in 2013, follows the story of four women fighting for an education, set against the backdrop of the women’s suffrage movement. Set in 1896 at Cambridge University — the first college in Britain to admit women. But things still aren’t equal. The men graduate with degrees and prospects, but the women leave with nothing but the stigma of being a “blue stocking” — a derogatory term for an educated woman. Follow the men and women of Cambridge University as they shatter prevailing traditions. Conflicts abound as generations, social classes, and genders clash.

A different kind of fairy tale, this play is a celebration of life and love. It tells the story of Peter and Rita, who fall in love despite the woman’s pessimistic outlook on life. Shortly after their wedding, a supernatural event tests the strength of their love and commitment to each other. Will they live happily ever after? Join us for Craig Lucas’ intriguing, charming, and tender romantic comedy.

The Little Theatre of Alexandria operates out of its own theatre in Old town Alexandria, VA. LTA is the oldest award-winning theater in the Washington metro area and one of the few community theaters in the country with its own building and an ambitious seven-show season. As the theatre is a volunteer organization, all onstage and backstage work for each performance is done by volunteers. The organization also offers acting classes for children and adults.

Update on Safety
To protect the health and safety of our patrons, actors, crew, and volunteers, The Little Theatre of Alexandria will require all patrons to provide proof of full vaccination against COVID-19 to attend any performance held in our theater after September 1, 2021. Please see our full policy statement at http://thelittletheatre.com/wp-content/uploads/2017/05/LTA-COVID-Immunization-Policy.pdf.