Legendary American actor, singer, dancer, composer, lyricist, playwright, and producer George M. Cohan (1878-1942) epitomized the multitude of skills and accomplishments of a multi-hyphenate long before the term even existed, in a lifetime on the stage and screen. Irish Repertory Theatre is commemorating the contributions of the iconic showman with a newly abridged online version of writer and director Chip Deffaa’s George M. Cohan Tonight!, which made its theatrical Off-Broadway debut with the company in 2006, earning a Drama Desk Award nomination for Solo Performance and a Drama League nomination for its star Jon Peterson.

Known in his day as “the man who owned Broadway,” Cohan is credited with being the father of American musical comedy and a trailblazer in the development of the book musical, creating narratives supported by songs and employing dance to advance the plot. In addition to writing more than 50 shows and over 300 songs, he was one of the founding members of ASCAP in 1914, was the first artist in any genre to be honored with the Congressional Gold Medal in 1940 (for his contributions to American morale during World War I), and, at the behest of lyricist Oscar Hammerstein II, became the only actor with a statue on Broadway (dedicated in 1959, at 46th Street in Duffy Square, facing Times Square).

Irish Rep’s current presentation, a BumptyBump Production, was filmed specifically for digital distribution during the pandemic closure of theaters in December 2020, when the stage was illuminated only by a ghost light. Performed, adapted, edited, and choreographed by Peterson, the new biopic was reimagined by its star with the framing device of Cohan’s ghost returning to tell his story, while haunting theaters all around the City (in keeping with the longstanding tradition of spirits of stars past sighted in Broadway houses).

In direct address to the audience, Peterson delivers Cohan’s reminiscences about his beloved family, a life devoted to entertainment, and his stellar career from Vaudeville to Broadway, in a vintage-style suit, vest, and bow tie, tap shoes, straw hat, and cane (original 2006 costume design by David Toser, here by Peter Sellers and Billy Hipkins, and provided by Cavani, with shoes by Capezio). The personal anecdotes begin with such telling and formative facts as his Vaudevillian parents bringing him on stage within days of his birth on the 4th of July [or, according to documents, the 3rd];  that he and his sister spent their infancy and early childhood sleeping in old travel trunks; that he wrote his first song at the age of four, took charge of the family act (“The Four Cohans”) at fifteen, and often created his dance steps first, then matched his music and lyrics to them.

The chronological sequence of memories through the journey of his life is interspersed with lively segments of tap dancing, at which Peterson is a master, and a total of 30 Cohan songs. Those include standards like “Give My Regards to Broadway,” “Over There,” “You’re a Grand Old Flag,” “The Yankee Doodle Boy” (aka “Yankee Doodle Dandy”), and “Harrigan” (sung with an apropos Irish accent), along with lesser-known numbers like “Josephine” (a tribute to his sibling), the self-referencing “You Won’t Do Any Business if You Haven’t Got a Band,” the upbeat “The Hinky Dee,” and the reflective “Life’s A Funny Proposition.” The vocals are backed by the top-notch trio of music director Michael Lavine on piano, Rob Garcia on bass, and Brian Nalepka on drums.

Because the film adaptation includes a montage of footage, in both black-and-white and color, from different on-stage performances of the show (with cinematography by Oliver Peng, Marc Perroquín, Mkhail Kniazev and Jon Waldman, and video and audio editing by Peetapix), the sets shift from the original design by James Morgan to those of Peter Sellers, Brandon Chaney, and Audrey Vuong, all in keeping with the look and feel of Vaudeville and old Broadway. Lighting by Allison Hohman, Michael Kauffman, Oliver Peng, Marc Parroquín, Jon Waldman, and Brandon Cheney (following the original lighting by Mary Jo Dondlinger) also evokes the mood of the times, with footlights, spotlights, and marquee lights illuminating Peterson in the darkened houses.

If you’d like a refresher on Cohan, his work, and his times, George M. Cohan Tonight! provides a succinct survey of the theatrical icon, his historical importance to the development of Broadway, and why he should always be remembered. 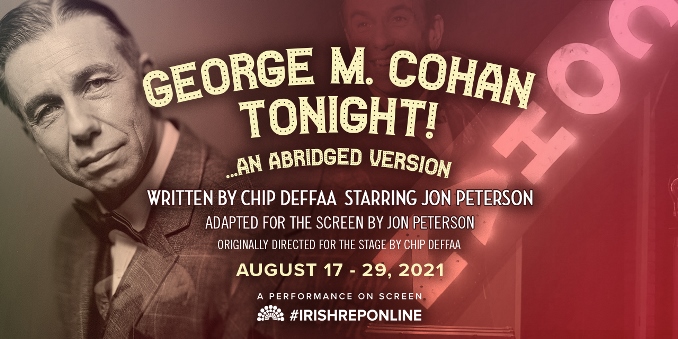 George M. Cohan Tonight! streams through Saturday, August 29, 2021, on the Irish Repertory Theatre@Home platform. Reservations are free but required to access the digital event; a donation of $25 is suggested for those who can afford to give. Prior to the selected screening, a link will be emailed to viewers registered with an active Irish Rep email address and password, which will be used to log in.