The rain held off, the show went on, and, oh, what a show! NYC-based The Doo Wop Project delivered a spectacular finale to Bristol Riverside Theatre’s William Penn Bank Summer Music Fest with a Broadway-quality concert (as expected, since each member of the group is a Broadway star), a thunderous standing ovation from the audience, and a perfectly themed encore of The Four Seasons’ “December 1963 (Oh, What a Night).” Oh, yes it was!

Backed by music director, arranger, and orchestrator Sonny Paladino on keyboards, with John Isley on sax, Julia Adamy on bass guitar, and Dena Tauriello on drums, they traced the evolution of doo wop through their vibrant covers of a selection of mid-century standards, including a high-energy opening medley of “Remember Then” by The Earls, “Baby Come Back To Me” by The Capris, and Bobby Day’s “Little Bitty Pretty One” (popularized by Thurston Harris); the up-tempo “Come and Go with Me” by The Del Vikings, Curtis Lee’s “Pretty Liittle Angel Eyes,” and “Speedoo” by The Cadillacs; and the romantic “I Only Have Eyes for You” by The Flamingos and “The Angels Listened In” by The Crests.

They also performed hits by artists of the next decade who were inspired by doo wop, among them “The Tracks of My Tears” and “Tears of a Clown” by Smokey Robinson & The Miracles, and “Sherry,” “Big Girls Don’t Cry, and “Walk Like a Man” by The Four Seasons; and their own original “DooWopified” versions of more recent numbers like Michael Jackson’s “The Way You Make Me Feel,” Jason Mraz’s “I’m Yours,” and Garth Brooks’ “Friends in Low Places” (for their followers in places where country music rules); and even the reimagined classic showtune “The Impossible Dream” from Man of La Mancha. And that, they explained, is why they’re called The Doo Wop Project, with the goal of bringing the genre into the 21st century and expanding its appreciation beyond the generation of its roots to a new contemporary audience.

Each of the artists had blockbuster solos that highlighted their superb vocal skills, from Fischer’s rich falsetto to Edwards’ resonant bass, Brown’s soulful tenor to Nolfi’s powerful baritone. Together they delivered the smoothest of harmonies and flawless a cappella passages, along with perfectly synchronized exuberant choreography that evoked the original stylings of the era, and a playful doo-wop take on familiar country-and-western steps.

In addition to being entertained by the stellar music and moves, which had the crowd up on their feet dancing, the audience was introduced to the individual members of the group, sharing personal stories of their backgrounds, how they first came to know doo wop, and how they got to perform the songs they loved and listened to from childhood both on and off Broadway, in Jersey Boys, A Bronx Tale, Motown: The Musical, Smokey Joe’s Cafe, and the upcoming production of MJ: The Musical.

They also displayed their sincere appreciation for each other’s extraordinary musical talent, with a palpable camaraderie that captured the sensibility of the origins of the genre – that of a group of neighborhood friends harmonizing together on the street corner. And they pointed out that their own favorite seminal doo-wop group is The Del-Vikings, which was one of the first to be integrated (as are they), adding that the love of great music is shared by everyone of every race, nationality, religion, location, gender, and sexual identity.

The top-notch performance and salient message were enhanced by colorful stage lighting and dapper period-style suits, for a thoroughly authentic, engaging, and upbeat night. Though the show at BRT is now closed, The Doo Wop Project will continue their national tour, so be sure to catch this fabulous act when you can. 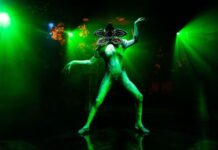 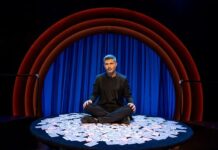