Eighteen years ago, rock musician and Howard County resident Ian Kennedy heard some news about the future of the popular outdoor venue Merriweather Post Pavilion (MPP). The property was at the mercy of a development company who, in their quest to make the area more resident-friendly, wanted to raze the 1967 open-air concert hall. Ian had spent much of his life in and around Symphony Woods, gigging with his band – he had even played guitar on MPP’s stage during his own high school graduation. After some weighty discussions with an old friend, the two decided to try to change the amphitheater’s fate. They become partners and founded the Save Merriweather Foundation, after which they did exactly that – with some friends, local political leaders, and signed petitions to help support the cause, of course.

Jump seven years forward, and Merriweather Post Pavilion was enjoying a renaissance to beat the band. Relieved that their favorite place had been saved, musicians and groups booked gigs to bring audiences back in full force. Billboard Magazine even named the venue the second best amphitheater in the United States. The Downtown Columbia Plan of 2010 was made, and shortly thereafter an organization was established to support expanded artistic, cultural, civic, and educational programming in the immediate area.

Today, this landmark and its surrounding woods are owned by that organization – the Downtown Columbia Arts and Culture Commission (DCACC). The venue is much improved after $55 million worth of renovations – sporting a new higher roof, an increased number of more accessible parking spaces, and better facilities and amenities. Merriweather Park at Symphony Woods now has musical arts installations and a striking second stage called The Chrysalis. And just outside the boundaries of the woods, visitors will find a new open plaza for arts events called Color Burst Park.

As the Executive Director of DCACC, Ian Kennedy stands at the helm of what is now dubbed ‘the Crescent’ – collaborating with operating company I.M.P., the Inner Arbor Trust, and various other organizations. Ian says, “we’re starting to see all this work bear fruit – new and dynamic events and programs are already taking place in our new performance spaces, and we’re just getting started. We’re hosting smaller events and larger festival events that incorporate both MPP and Symphony Woods. And then we have Color Burst Park, where we hold our popular Dance Series. We’ve even brought in instructors to help encourage people to dance – which has turned out to be unnecessary.”

Naturally, Kennedy and his spouse are always administrating or attending the events with their own children, so I asked him how parents will fare. He says, “one of the best benefits for us is that we have the ability to do things we think our kids are going to enjoy. We’ve done low cost family-friendly movie nights, where the young ones can just run free on the lawn a bit. And a lot of families have shown up to the concerts at Color Burst Park, because they’re entertaining for all ages – we have fun giveaways for them, and there’s a splash pad for the littles. It’s a sweet spot.” Ian is also excited about another sweet spot coming to the plaza for the adults: a ninth location of Busboys and Poets, opening soon.

Kennedy also works closely with the property’s former owner The Howard Hughes Corporation (HHC), who are committed to championing the Downtown Columbia arts scene with programs and events through their new cultural collective, Merriweather District. HHC Board Member Vanessa Rodriguez says, “The Howard Hughes Corporation’s mission is to help bring a true walkable urban city to life. Since the ownership of MPP was transferred to DCACC in 2016, HHC has focused on developing the Merriweather, Lakefront, and Central (Mall) districts. Trends have shown that people want more open green space, walkability, and sustainability – all of which Columbia has. So we’re now bringing a little of the flavor of the big city back in, by making the Merriweather district a regional hub – the perfect blend of culture and commerce.” 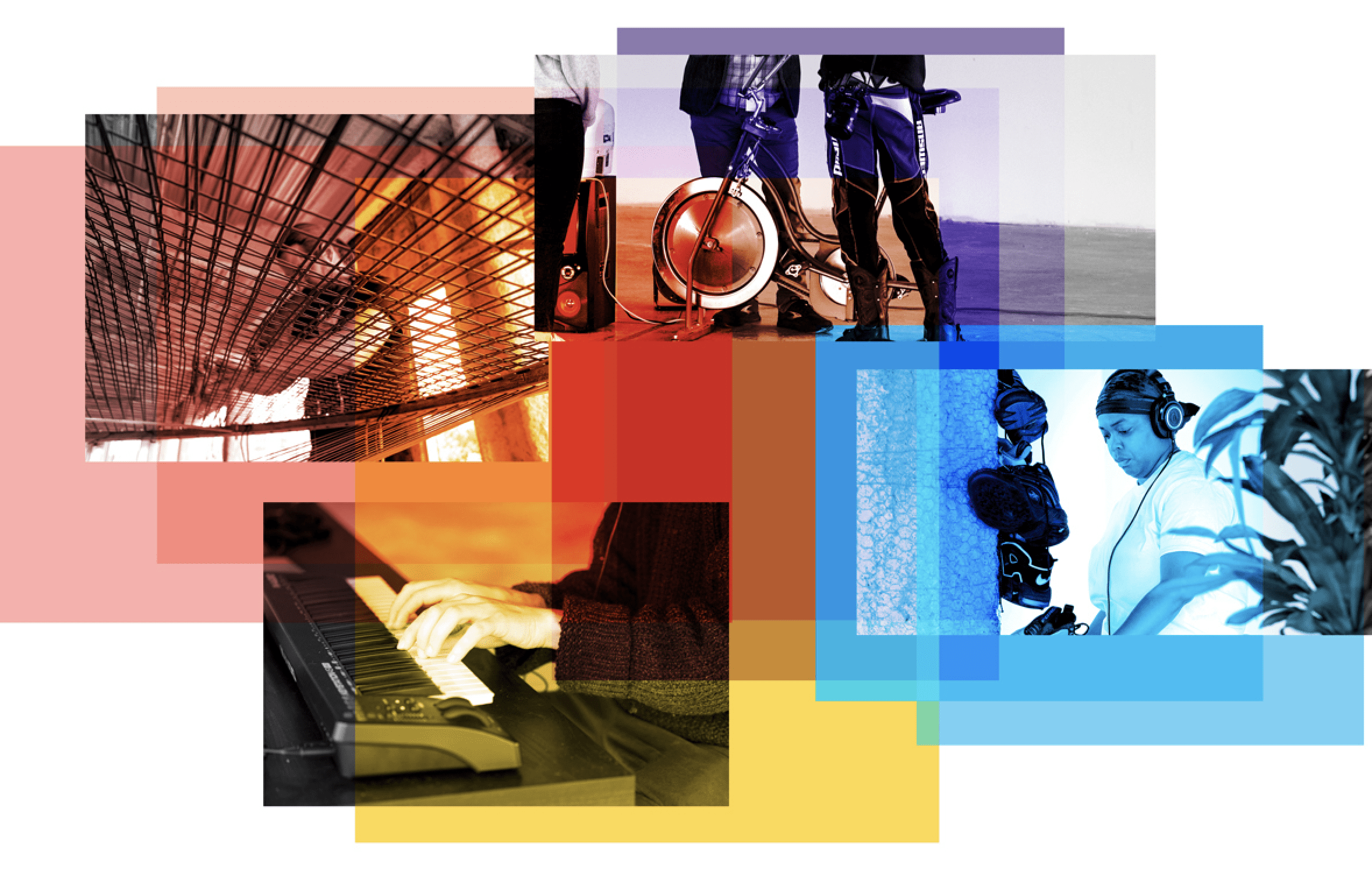 The Howard Hughes Corporation has been actively creating an arts and culture ecosystem since 2017, but their focus has shifted to nurturing individual artists with their Merriweather District Artists-in-Residence program, created in collaboration with the Howard County Arts Council. The program is in its fourth year, and has received applications from all over the world. This year, four selected artists were chosen to reside near the Merriweather District studio space and spend up to two months creating work in a medium of their choosing. The 2021 culminating exposition, entitled Huephoria, raises the immersive art concept to a new level, taking over 27,000 square feet of raw office space. The exhibition features art from Brooklyn, NY’s Morgan Bobrow-Williams, Baltimore, MD’s Andrew Burke, Glen Burnie, MD’s Chrystal Seawood, and Tempe, AZ’s Bobby Zokaites.

The best way to stay posted about all events is by joining the Merriweather District email list at the bottom of their home page. You can also follow their Instagram, Facebook, and YouTube. You can find more detailed info about big music happenings (and buy tickets) on the Merriweather Post Pavilion website. More event details and links are below.

General Admission Tickets: $12. Free admission for Children, Teachers, Students, and First Responders. Video and photography is encouraged for both media and visitors. Face coverings are required for this event.

Tickets can be purchased and reserved on the Huephoria event page. A portion of the proceeds will be donated to the Friends & Foundation of the Howard County Library System. Artist bios and descriptions of the exhibits can be found below.

Andrew Burke: Vanishing Point
Vanishing Point allows visitors to experience two pieces of music that explore proximity and distance as a metaphor for the moments in which we cease to recognize a stranger as a unique individual, and instead see them as part of a faceless mass and vice versa. The work will include immersive film and live musical performances.

About Andrew Burke (Baltimore, MD): Andrew creates music that explores political and social subjects, opening up fraught discourse to a higher level of emotional sensitivity. After working in political communications for four years, he was interested in how to further progress in the structure of our political system and realized that there was an opportunity to allow music to be a catalyst and change agent in nuanced discussion. In this residency, Andrew is bringing to life a composition and curating an immersive sound installation named Vanishing Point. The orchestral piece will be performed with a chamber ensemble on an immersive and engaging stage and performed for a live audience with the intention of creating a moment of connection. The audience will get the chance to not only observe live performers, but to mingle among them and be enveloped in their music for a deeply cathartic and welcoming experience. Andrew is currently pursuing a Master of Music in Composition at the Peabody Conservatory at Johns Hopkins University.

Chrystal Seawood: Feeling Our Way Through: Exploring Masculinity in Black Youth
Feeling Our Way Through explores the complexity of masculinity in Black youth. Three interactive installations address the spaces in which it is safe for Black masculine youth to embody a range of emotions without losing their “status” as masculine. The work simultaneously aims to delimit and interrogate the precariousness of traditional masculine culture.

About Chrystal Seawood (Glen Burnie, MD): Chrystal Seawood is a primarily self-
taught artist from the rural town of Forrest City, Arkansas. At the heart of her work, she
explores ideas of equity and infrastructure of gender expression, specifically masculinity.
In theory, she seeks to humanize her subjects in the same ways they’ve been objectified. During the program, Chrystal will be exploring masculinity with the community and building a series of installations that explore the spectrum of masculinity, while also addressing the way that gender identity can continue to be expressed in a more inclusive and safer environment. In 2008, Seawood earned a BA in Digital Art and Design, and worked as a graphic designer in corporate America. In 2015, she decided to become a high school English teacher, and has since been operating much like an activist, with a classroom and a canvas. Starting this year, Chrystal will be pursuing her MFA at Maryland Institute College of Arts (MICA).

Morgan Bobrow-Williams: emergent
emergent is an interactive, transdisciplinary art installation involving live performance, video, sound, and sculptural elements. It looks at the relationship amongst self determination, dreaming, technology, time, and space. Morgan will perform simultaneously throughout the
exhibition period. The performance will be a combination of movement and vocal expression.

About Morgan Bobrow-Williams (Brooklyn, NY): Morgan is a transdisciplinary artist who expresses themselves by blending traditional mediums, such as dance and movement, film, sound and installation art using improvisation as a tool for discovery and creation. Driven by emotions, philosophical thinking and sensual experience, Morgan creates work that is intuitive and asks questions. Morgan received a BFA from Marymount Manhattan College in Dance Performance with a concentration in choreography. Recently, Morgan returned from Germany after working as a full-time dance company member at Staatstheater Kassel under the direction of Johannes Wieland. While in residency, Morgan is creating an immersive and experiential environment that invites the viewer to widen their perspective, engage in their agency, and reflect on the interconnectivity of our experience.

Bobby Zokaites: Magrathea
Magrathea is a kinetic sculpture consisting of two caned wheels revolving past opposing light sources. The intricate caning pattern casts dramatic shadows across the exhibition space, aligning and diverging as the wheels make their revolutions. While the piece is welcoming in its
familiar colors and forms, its sophistication lies in the juxtaposition of the ancient and the modern.

About Bobby Zokaites (Tempe, AZ): Bobby is a sculptor who engages in imagination through the creation of large-scale, colorful, interactive objects and spaces. His work is intended to stimulate audience interaction and inspire enthusiasm about the idea of ‘play.’ While investigating themes of adventure and childhood, Bobby fabricates and assembles sculpture in an industrious process. The audience is invited to see, hear and play with installations which blur the lines between artists, performer and viewer. The magic really happens when children start to show their parents how to interact with the space. During the residency, Bobby is exploring the long and shared tradition of
weaving, and how to experiment with interplay and illumination. He will be weaving 9 miles of paracord with a loom designed and developed by Bobby himself. At the exhibition, the audience will be able to explore a dynamic sculpture garden from his imagination.