Rapid Lemon Productions’ production of Rachel is a powerful indictment of American racism. Playwright Aladrian C. Wetzel has adapted Angelina Weld Grimké’s early 20th-century play for our current era, setting it against the recent murders of Black men. Directed by Tracie Marie Jiggetts, it shows the personal and emotional damages the system wreaks against Black people.

Zipporah Brown plays the title character, Rachel Loving, with great passion. At the play’s start, she has an optimism that is quickly snuffed out by hearing of the cruelty and injustices inflicted on Black people. Wanting to be a teacher, she fiercely determines not to have children, unable to watch them have to navigate a world that treats them so terribly. The second act, set five years later, confirms her choice, as Jimmy, an orphan the family has adopted, tells her about his encounter with the police. Brown gives her most powerful performances here, tearing a rose from her boyfriend to pieces and screaming in frustration and anger before collapsing. She plays the aftermath of this incident perfectly, alternating between sitting withdrawn on the leather chair and laughing hysterically at a God that seems to delight in Black children suffering. In the end, she stands alone, speaking to the audience.

Dominic Gladden gives a strength tinged with vulnerability to Rachel’s boyfriend John. Gladden and Brown work well together, easily talking and joking with each other. In one scene they kiss tenderly and lovingly. Later, trying to comfort her during her breakdown, he kneels besides her, emotionally reminding her of their first date and the beautiful full windows they saw. It is a poignant performance.

Kwame Shaka Opare plays Rachel’s brother Tom with passion. He is jubilant at the beginning, having made quarterback, and feeling on top of the world. After hearing his mother’s tragic story about her husband, he rages at a world where this could happen. In the second act, he speaks of getting expelled from college because of his activities with Black Lives Matter. He shows a protectiveness towards his family, reminding Jimmy (Majenta Thomas) to do well in school and look after his mother as she takes him to school.

Majenta Thomas expertly plays two roles and two genders, Rachel’s friend Sarah and Jimmy. As Sarah, Thomas is friendly and joking, teasing Brown about John, but also telling her about a disturbing racist incident at school. Thomas plays Jimmy as full of youthful energy, dancing around the stage and getting in between Brown and Opare when they argue. Calling himself a man and eager to be treated as one, Thomas reveals Jimmy’s youth and vulnerability in recounting a terrifying police incident to Brown. Thomas shows Jimmy as a frightened boy, curled up in Brown’s arms and nearly weeping.

Valerie Lewis plays Rachel and Tom’s mother, Mrs. Loving, with a quiet protectiveness, concerned that Tom’s boisterousness might jeopardize his chances. All too aware of how society treats Black people with opportunities, she advocates caution and carefulness for her children. She tells the story of her husband and son—“lynched” in their town for speaking about Black men being killed—in a quiet but emotional way, painting a devastating picture. Still, she holds to hope, begging her children not to give up on their faith and reminding Rachel of her role as “protector of children.”

Set Designer Max Garner helps create powerful performances within an intimate space of the Loving apartment, with a leather couch and sofa on the left and dining room table and chairs on the right. A curtain to a window is beyond the table, while a door to the rest of the apartment is further right. Props Designer Matthew Zwick makes it a comfortable, safe place with plates, silverware, and family items.

Lighting Designer Hannah Brill adds to the production’s atmosphere by bathing the stage in red light during one of Rachel’s emotional speeches and turning the lights down for Mrs. Loving’s monologue. When Jimmy recounts a recent encounter by the police, the lights spotlight him. Sound Designer Shanika Freeman highlights the drama by throwing out sound effects, like a threatening voice message, gunshots, and the voices of a cop and teacher. In an inventive move, Projection Designer JR Scroyer flashes images onto a screen behind the dining room table, showing home movies, news reports, and, during one emotional scene, the “N” word.

Tracie Marie Jiggetts does a great job as director. The actors navigate the small space and each other well, using every part of the stage to capture the drama. While this production can be viewed online in real time, it is best seen in person. Rachel is a well-done updating of an old play, and a sad reminder that little has changed for some people in America, even in a hundred years. 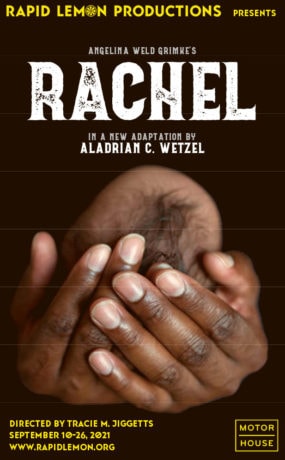 Rachel plays through 26, 2021. All performances will be live, and available both online and in person at Motor House, 120 W. North Avenue, Baltimore, MD. In-person attendance will follow strict COVID safety protocols in accordance with City of Baltimore guidelines.

Performances are at 8:00pm September 10, 11, 16, 17, 18, 24 and 25; at 5:00pm September 12, 19, and 26. Tickets are $24 and available online. Select “Will-Call” delivery for in person; select “Online Access” delivery for streaming. (Patrons who buy a streaming ticket will receive a link by email an hour before the showtime they choose.) Discounted Industry Night tickets are $15 for the performance Friday, September 17.