The Washington Stage Guild continues its series of online presentations with a work perfectly suited to an online format. Following its well-received streamed performances of George Bernard Shaw’s Don Juan in Hell, The Devil’s Disciple, and How He Lied to Her Husband, WSG offers a play that explores the private life of its “house playwright,” Dear Liar by Jerome Kilty, adapted from the correspondence between Shaw and Mrs. Patrick Campbell.

At the turn of the 20th century, George Bernard Shaw was establishing his place among the world’s greatest playwrights. One of the actresses in the London theater at the time was a woman whose career would last for decades and would intersect with Shaw’s in a way that would change them both. Mrs. Patrick Campbell had achieved fame and artistic success in the 1890s, and Shaw knew she could do wonders with his plays. Eventually, the chastely married GBS became infatuated with her, an infatuation she did little to discourage. As he by turns desired her and was frustrated by her, they kept up a correspondence worthy of two great wits, and Mrs. Pat was able to maintain the relationship long enough for Shaw to write one of his best roles for her — Eliza Doolittle.

In the 1950s, actor Jerome Kilty adapted their letters, and their extraordinary up-and-down friendship, into the play Dear Liar, a huge hit in London and New York. Mrs. Pat is not well-remembered now, so it gives us great pleasure to reintroduce her to our audience and to give you a glimpse of an infatuated Shaw.

Nigel Reed will appear as Shaw, Julie-Ann Elliott will appear as Mrs. Pat, and founding company member Laura Giannarelli will direct. Having directed the Stage Guild’s online presentation of Shaw’s The Devil’s Disciple earlier this year, Giannarelli relishes this chance to explore his private life and his fascinating relationship with one of the great actresses of his day.

“It’s wonderful to be able to watch the connection between these two extraordinary individuals develop as the play unfolds,” said Giannarelli. “The Zoom format works perfectly for this play. Through their letters, we experience the ups and downs of both their professional and personal lives in such an intimate way — in close-up from the comfort of our own homes. I am also thrilled to be working with these two marvelous actors, known to audiences across our region.”

Dear Liar streams free from September 29 at 8 pm through October 3, 2021, at 8 pm. To view this unique performance, patrons can go to Washington Stage Guild’s event page at www.ShowTix4U.com/events/wsg and follow the prompts to obtain a free ticket good for watching anytime during a 48-hour rental period. 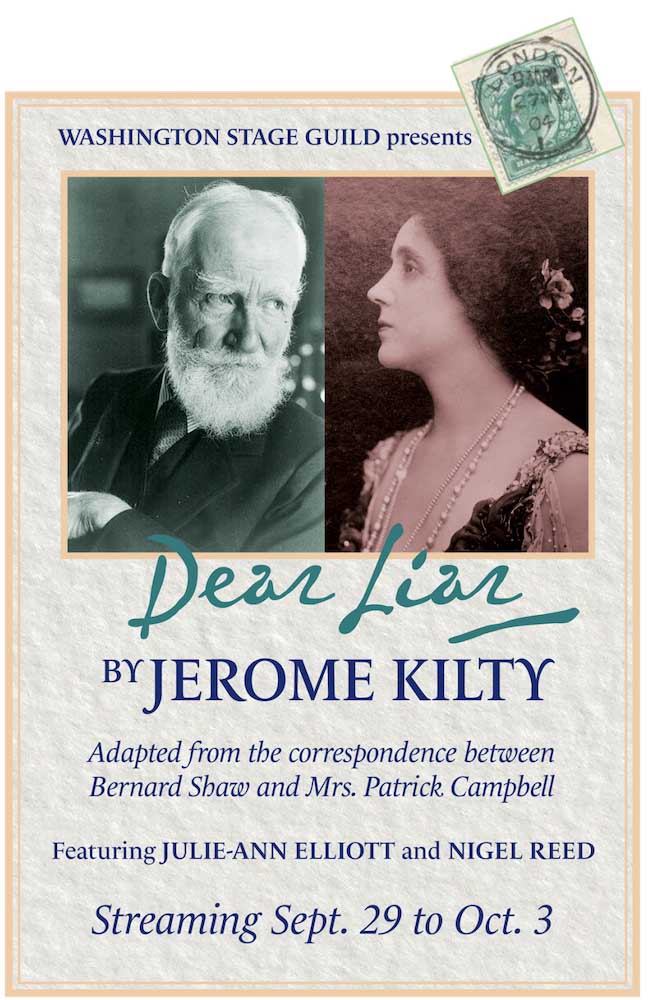 Nigel Reed (George Bernard Shaw) returns to the Washington Stage Guild, where he was last seen as Garth Williams in Alabama Story with Julie-Ann Elliott. He has appeared in several past WSG productions including The Underpants, Getting Married, On the Rocks, A Skull in Connemara, and more. He is a past Helen Hayes Award winner and a proud member of Actors’ Equity Association.

Julie-Ann Elliott (Mrs. Patrick Campbell) is happily working again with Washington Stage Guild, where most recently she was seen in the streamed production of How He Lied to Her Husband and where she last crossed their boards, along with Nigel Reed, as librarian Emily Reed in Alabama Story. She is a proud member of Actors’ Equity Association.

The Washington Stage Guild produces eloquent plays of idea and argument, passion, and wit — plays from all periods of world drama and all parts of the world presented by a diverse and inclusive ensemble with a contemporary sensibility — smart theater for a smart town!