An emergency audit at a Fifth Avenue hedge fund not only puts a stop to the company’s annual Summer Drinks Night party for its back-office accountants, but also launches a chaotic evening of overtime work and panic for the team, assigned the task of locating the problem, correcting it, and identifying who was responsible – or picking a scapegoat to fire. Was it just an unwitting error, or was it an intentional act of fraud? Find out in the world premiere of F.I.R.E. by emerging playwright Julia Blauvelt, the final streaming production of New Normal Rep’s inaugural season of professional theater on the internet.

Under the direction of Heather Arnson, the cast of seven, presented in a Zoom box format (with virtual technical direction by Adriana Gaviria and smooth editing by Hiatt Woods), skillfully assumes the characters’ distinctive personalities and positions, while also revealing their backstories, inter-relationships, and personal ethics (or lack thereof) through well-paced group conversations and individual encounters in the office. And they’re not always what they first seem, as the truth is uncovered and they are forced to make the decision of confronting it, owning up to it, or covering it up.

Each of the accountants displays a different reaction to the unexpected crisis, making them all possible suspects in the negligent accounting or deliberately illegal act. Aaron Matteson is hilariously annoying as the hyper-obnoxious Hutch – outspoken and driven, idolizing Warren Buffett, touting his own investments, appreciation of thriftiness, and love of his job, excited about Drinks Night, and keeping his “eye on the prize” by adhering to the play’s eponymous acronym, which he explains to his co-workers after getting them drunk on shots of Patron served up in office espresso cups to compensate for them being compelled to work through the party.

Jeffrey Bean as Chris, who’s the oldest and has been there the longest, seems as concerned about checking in with his wife, getting home on time, and helping to get their kids to sleep as he is irritated with work and the turn of events. Nathaniel P. Claridad as Jazz is stricken with uncontrolled anxiety and a bout of arrhythmia when he gets the news, while Nygel D. Robinson’s Noel questions if anyone really likes their job, then engages in a tipsy flirtation with the drunken young temp/wannabe actress Penny, amusingly played by Ella Dershowitz.

Kierra Bunch as Shauna oversees the team with a no-nonsense professional demeanor, answering to the demands of her erratic boss Danica, embodied with just the right degree of equivocation by Carol Todd. Every performance is character-defining, entertaining, and suspicious, with psychological insights, secrets, and attitudes exposed along the way, right up to the surprise ending. The question (and Blauvelt’s point) is: Will there be accountability, or will it be business as usual in the world of high finance?

The fine performances are supported by business-appropriate costumes by David C. Woolard, multimedia design by Edward T Morris, and original music and sound by Lindsay Jones, in a show that will keep you laughing, guessing, and fuming.

Running Time: Approximately one hour and 45 minutes, including an intermission. 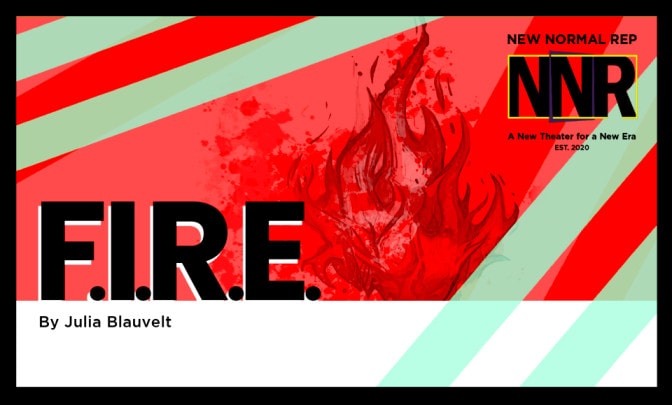 F.I.R.E. streams on demand through Wednesday, October 20, 2021, at New Normal Rep. For tickets (priced at $25, or $10 for students, educators, and theater professionals), go online. Please note that the single-viewer link cannot be shared. If the link is used to access the stream from more than one device, the original viewer will be dropped from the connection and will no longer be able to watch the show.