One of my most unpopular theater-related opinions is that temperamental, woman-hating Professor Henry Higgins of My Fair Lady—and of Pygmalion before that—is redeemable. Perhaps even, by the end of the show, redeemed already. It may be an unpopular opinion now, but I have backup. My opinion was reportedly shared by none other than Mrs. Patrick Campbell, who starred as Eliza Doolittle in the first English-language production of Pygmalion.

Jerome Kilty’s play Dear Liar, now streaming as a pre-filmed production from the Washington Stage Guild, gives us a glimpse into how this great actress felt about this great play—and about the man who wrote it. Dear Liar is based on the letters between Campbell and George Bernard Shaw, who wrote the role of Eliza for her.

Julie-Ann Elliott, recently seen in WSG’s online production of How He Lied to Her Husband, plays Campbell, with fellow WSG veteran Nigel Reed as Shaw. The two of them read these lively and brilliant letters, and the short stretches of narrative between them, with great verve, adeptly capturing every mood from flirtatious to businesslike to affectionate to bitter to tragic. Shaw’s quirks, intelligence, and charisma are wonderfully conveyed by Reed, who can bring hints of merriment to even serious or strange subjects, enhanced by a slight Irish accent. In the very first letter read here, we find him suggesting that his newly healed bone would make a good glove-stretcher for her; later on, he will hold her transfixed with a long, rather bizarre monologue about his mother’s cremation. “You don’t deserve to be as clever as you are” is Campbell’s eventual summation of his character, but she’s quickly won over; in no time at all they are “Stella” and “Joey” to each other.

As the married Shaw insists on bringing his infatuation with Campbell into all sorts of conversations—sometimes teasingly, sometimes more seriously—she successfully parries again and again. But Elliott, with natural warmth, brings out both the amusement and tenderness in Campbell’s words as she does so. She even flirts back sometimes, but propriety and wariness keep making her draw back. When Shaw doggedly pursues Campbell during her much-needed vacation and then finds himself abandoned, the pain in Reed’s face and voice is genuinely moving, despite his character’s unreasonable self-pity.

The Zoom format, with the actors’ two windows placed side by side, is ideal for this play, not just because it works well for the letter-reading conceit but because it highlights the contrast in the actors’ postures: hers relaxed, his rigidly straight. At the same time, under Laura Giannarelli’s assured direction, the two interact as naturally as if they were sitting in the same room. Elaine Randolph, Zoom production manager/stage manager (assisted by Lauren Hyland as video editor), has provided beautiful period backdrops for them, with Reed’s background taken from an image of Shaw’s own home.

We even get the treat of seeing this Campbell and Shaw act out bits of Pygmalion as the timeline brings us to the rehearsal period of that play, and bicker over her technique and his instructions. And we begin to understand more about her views of the play and its characters. For a woman who could maintain a long and intimate friendship with George Bernard Shaw, dealing with Henry Higgins must have seemed like a piece of cake. 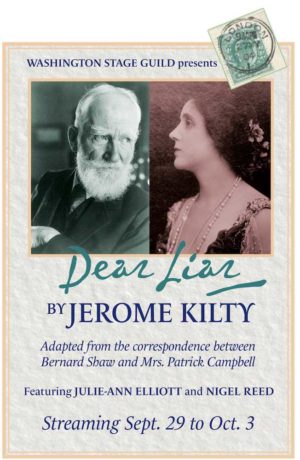 SEE ALSO:
Shaw and his star actress will drop lines in ‘Dear Liar’ from WSG