Broadway’s A.J. Holmes (who tells us he has legally added the preceding show-biz identifier to his name) has an impressive list of credentials on the stage and screen, from his 1000+ performances as lead character Elder Cunningham in the The Book of Mormon on Broadway, the US National Tour, London’s West End, and in Melbourne and Sydney, Australia, to writing for TV’s popular animated series South Park and the musical-theater company YouTube sensation Starkid Productions. His one-man musical Yeah, But Not Right Now, currently playing a limited Off-Broadway engagement at SoHo Playhouse, not only affirms his outstanding multiple talents as an actor, comedian, singer, musician, composer, and writer, it also offers a very personal look at his own life and psyche.

Indicative of Holmes’ inclination to procrastinate – both in telling and singing his truths to the audience, and, especially, to mature (“Please Wake Up”) – the show opens with a guest artist covering for him till he’s ready (stand-up comic Dan Soter on the night I attended, who offered some hilarious observations on the ‘90s and what to expect in the future). Holmes eventually makes his belated entry wearing a silk bathrobe over his everyday clothing (with Jama McMahon serving as costume consultant), after sleeping too late to make it to the theater on time.

Part cabaret-style concert, part self-help therapy session, the intimate show, referencing Bo Burnham: Inside (calling himself the “bargain-bin Bo Burnham”), is presented in direct address to the audience, with frequent interactions and calls for responses, affirmation, and sympathy for his “cis white privileged” life, as the always-engaging Brooklyn-based performer, under the direction of Caitlin Cook, traces his journey from a childhood in California with theater-loving parents and an ever-cheerful mother, to his relocation to NYC and a move-in with his new girlfriend, to his status as an international star and “Fuckboi,” to his current need to come clean about his missteps and flaws.

It’s all done through revealing stories and songs – often self-deprecating, sometimes tongue-in-cheek egomaniacal – that expose his “authentically performative” personality, his need for validation and acceptance by being the guy people want him to be (“I Can Be That Guy”), and the big mistakes he made along the way (including cheating on that girlfriend back home again and again and again and again and again and again while he was away, and now flirting from the stage with the “Beautiful Girl in the Front Row”).

Among the many skills he displays in the show are his perfect comic timing, emotional expressiveness, mastery at improv, blockbuster vocal range and breath control, and expert musicianship on keyboard, guitar, and percussion. He also dazzles as a master techie, recording, overlaying, and looping segments of songs, speech, and instrumentals live on stage, then playing them back to create the effect of a full band accompanying his solo performance (the most jaw-dropping is his double-layered alternating deliveries of every other syllable in a song, which were flawlessly merged and complete when replayed). He is supported by a clear sound design by Craig Bundy, mood-appropriate lighting by Brandon Bogel, and scenic consultation by three-time Tony Award-winner Scott Pask (The Book of Mormon), on the minimal focused set of instruments and lights in front of a stage curtain.

Holmes’ irresistible charm and virtuosity, openness and honesty, raise many questions about the nature of acting. Is he being sincere with us now, or is he still playing a role (that of “Himself”), with the intent of making the audience empathize with him and like him? And therein lies the rub for an actor: can he ever truly separate his inner self from his chosen profession, or does it all merge into one “authentically performative” life? The brilliance of the show, and its creator, is just that; we never really know, but we are convinced. 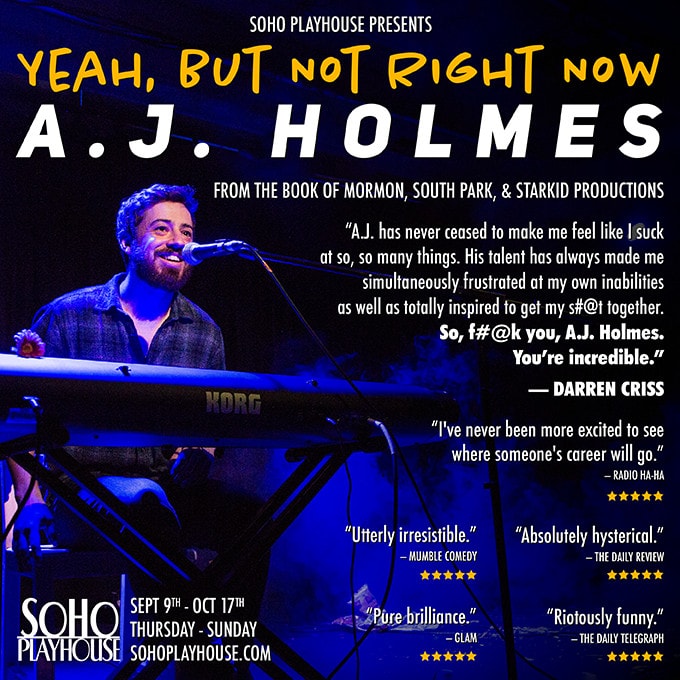 Yeah, But Not Right Now plays through Saturday, October 16, 2021 [please note the closing date change], at SoHo Playhouse, 15 Vandam Street, NYC. For tickets, priced at $29-48, call (212) 691-1555, or go online. Under current COVID-19 policy, guests will need to be fully vaccinated with an FDA or WHO authorized vaccine and must show proof of vaccination at the time of entry into the theater with their valid ticket. Mask use is also required per current CDC guidelines.