Aldersgate Church Community Theater presents Defying Gravity, a dramatic comedy by Jane Anderson that is loosely based on the 1986 Challenger disaster. Jessie Roberts directs a talented cast in this quirky production, which is as playful as it is poignant.

The Challenger was a NASA space shuttle orbiter that tragically broke apart mere seconds after liftoff, killing all seven crew members, including civilian Christa McAuliffe, a teacher. Now, if you’re expecting a biopic or documentary-style piece here, that is not what you’ll get. The Challenger is mainly used as a focal point in an otherwise free-structured show. The character inspired by Christa McAuliffe doesn’t share her name, nor does the character of her daughter, and all other characters are fictional…with the exception of Claude Monet.

Yep, you read that right. The renowned painter Claude Monet is a character in a play about the Challenger disaster. The show begins with Monet, played by Paul Donahoe, sharing his Rouen Cathedral series: sequential paintings of the same cathedral painted at different times throughout the day. One lady insists that she does not recognize the cathedral in any of the paintings until she sees the one painted at dusk and stands back in awe. The series, much like the play itself, is about swapping perspectives; we see and experience the same things, but we interpret them through our own personal lens shaped by all sorts of biases.

Set designer Jon Roberts uses three large screens and a variety of videos and projections throughout the show: from samples of Monet’s Impressionist paintings to grocery stores and beach shores, and ultimately an Impressionist-style painting of a NASA shuttle. Lighting and sound (designed by JK Lighting and Jon Roberts, respectively) help complete the atmosphere. The production team does a fantastic job with the technical elements, giving the actors rich foundations to work with.

This play is monologue-driven, and the cast delivers great performances with the material. Heather Plank is patient and poised as Teacher, and I especially enjoyed her monologue about flying buttresses, in which she teaches her class about mankind’s ongoing quest for knowledge and truth (man yearned to be closer to God, and found a way to do so through architecture). This desire is a huge theme of the play: mankind strives to continue onward, to achieve, learn, and tackle the impossible but must endure disasters and make sacrifices in order to do so.

Kathy Ohlhaber stands out as Elizabeth, Teacher’s daughter. She reminisces to the crowd as an adult, interweaving her past and present while sorting through her enduring grief. Her scenes hold the most emotion, and she delivers them beautifully. Betty and Ed (Patricia Spencer Smith and Steve Rosenthal) are great as an elderly couple chasing adventure in their Winnebego during retirement and ending up at the ill-fated launch. C.B. (Bruce Alan Rauscher) is a low-level NASA employee, and his girlfriend Donna (Christine Tankersley) is the level-headed bartender who knew the crew personally. Donna’s character is the one that brings everyone back down to earth, telling the guilt-ridden C.B., who of course blames himself, “You are not that important!” So many departments, factors, and people were involved in the disaster that it is nearly impossible to single out one specific cause…but tell that to the people who were intimately connected and affected.

If this all sounds like a lot, that’s because it is. The play is basically a whole bunch of tangents that, though coming from the same experience, vary widely. And that’s the entire point. Most theatergoers, I assume, will marvel at the intricate connections and poignant themes. Others will insist that Monet has no business being in such a play to begin with, and that in trying to accomplish too much, the play has descended into downright silliness. Talk about it and see where the conversation goes.

Aldersgate Church Community Theater’s Defying Gravity presents a collage of characters, events, and viewpoints that, when taken in as a whole, evoke interesting themes that make for great post-viewing conversation. This production is a great choice for friends or partners looking for new topics to discuss; whether you enjoy the experience or not, your opinion will be strong, and the night will be memorable.

Running Time: Approximately an hour and 45 minutes, including one 5-minute intermission. 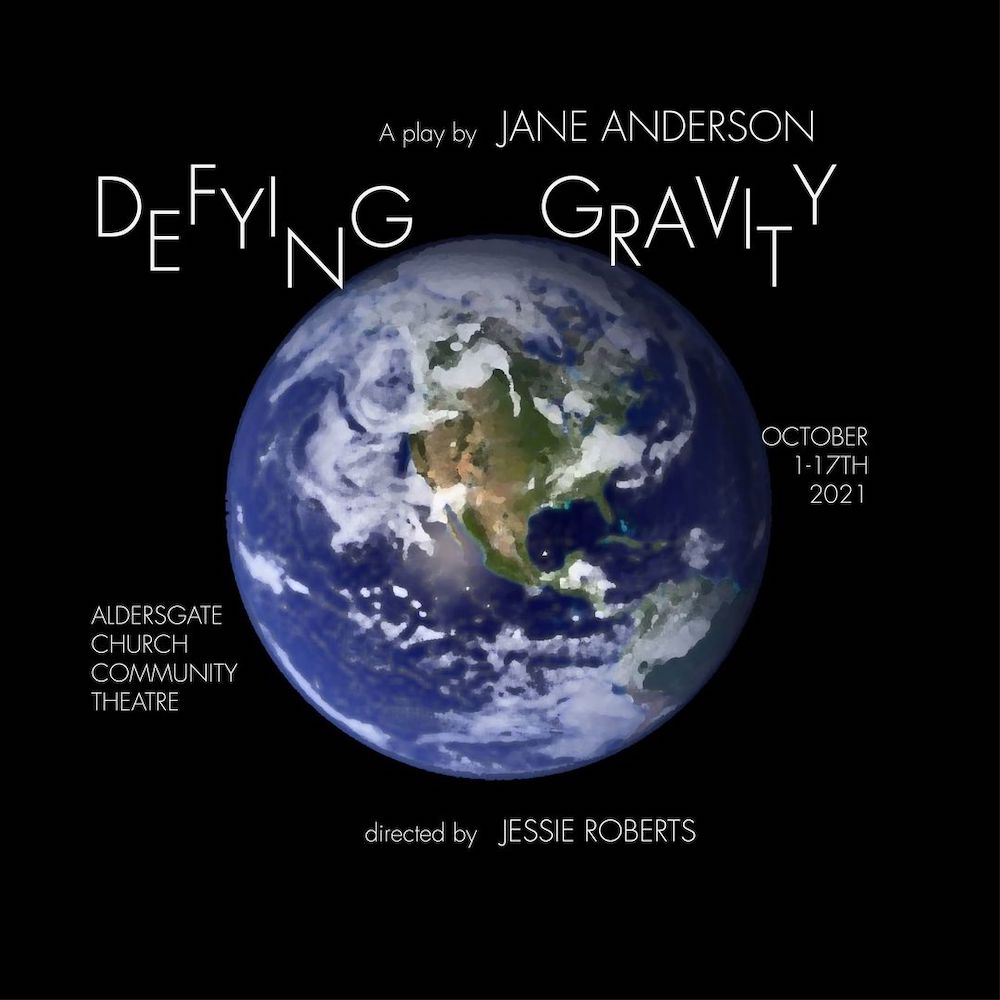 CORONAVIRUS SAFETY: Aldersgate Church Community Theater is following all guidelines put forth by Aldersgate UMC, Fairfax County, and the CDC. Masks must be worn over mouth and nose at all times while in the building.