It’s been a while. As things go, this is a fortunate moment, because the return of live, in-person theater sets the framework. Even if you are too young to recall summer 1965, The Beatle Club—a world premiere by Providence Players of Fairfax—offers experiences that can be found in any era. You may not have lived through the ’60s, but no matter the generation, it is easy to relate to the urgency of forming or joining a club. Maybe as a teen you generated a secret code with your besties, became a disciple of a rock or indie band, or later, when older and wiser, joined a book club.

The Beatle Club jogs the memory, jumping off the dedicated hopefulness of youthful belief, the father-son relationship loaded with expectations and challenged by the assertion of identity, and rotating into the age-related issues of failing cognition. These generational themes are delicately intertwined in The Beatle Club written by Teresa Sullivan and brought with clarity to the stage by Director Michael Donahue.

The place is Teaneck, New Jersey. Mary O’Shea, played by Sophia Manicone, is on a mission and hers is a Beatle Club with best friends David (Caden Mitchell), Karen (Han Nguyen), and Eddie (Joe Neff). The idea is to lure rock group The Beatles to an overnight stay at her suburban home, a convenient low-key stop-off after the much-anticipated concert at Shea Stadium. The mission is to meet as a group, write letters, and believe that the effort will have its own good end, namely tickets to the concert. As the teens read letters written to their own “favorite” Beatle, fragments overlap as each cameo is in turn framed by lighting by Dan Schrader. Isolated personal moments contribute a slice of common purpose, a reason to come together. The hopefulness and energy are contagious as Eddie (Joe Neff) gallops playfully, armed with contraband Entenmann’s Crumb Cake.

Granny (Jewel Schrader Orem) occupies a unique place in the household, smoothing over the interactions between family members even while stirring up a cake. Jewel Schrader Orem captures the Granny essence, creating comfort, a warm place to rest a head, while passing along the family heritage with a simple Irish tune. All are in anticipation of brother Rory’s (Mike Sarisky) 18th birthday as a cause for celebration. Sarisky is the likable big brother, compassionate to little sis Mary. Mary in turn looks up to big brother. Each weaves a unique role in the life of the other, and as Rory and Mary, both Sophia Manicone and Mike Sarisky, are compelling in the connection.

Less enthusiastic is Patrick (Dad) O’Shea played by Bill Bodie. Both he and Rory want a better father-son relationship but neither one quite knows how to go about it. Dad is unhappy with Rory’s career choice as a working man, with the sea and fishing as an occupation. Dad and Rory are at odds and failing to communicate. A letter arrives that brings the events of 1965, the draft induction, and the 18th birthday of Rory into perspective. Both Bodie and Sarisky do a fine job with this generational dance of expectations.

Set design by John Coscia capitalizes on negative space, tracing the roofline with a solid, simple line but leaving detail to imagination. The show opens in this way, with lights introducing the areas where scenes take place: the comfy basement sofa, the elevated kitchen area, the framed screen door, and a weighty red chair. Music design by John Smith aids transitions that partially dissolve the reality of necessary blackouts. Music by The Beatles is the backbone, though Granny is convinced that the club centers around the insects rather than the musicians. A media design by Joe Dzikiewicz draws up a conclusive layer of historical footage while actors merge bodies in silhouette.

Providence Players of Fairfax’s The Beatle Club resonates with timeless themes of conflict, family, and the need to come together. There is much to contemplate, and, with those who occupy the seats around me, we are able, finally, to come together and experience live theater after all. Actors, designers, directors, and crew from different generations have united to bring The Beatle Club to the stage. Perhaps we all can continue to do a little more for our community. 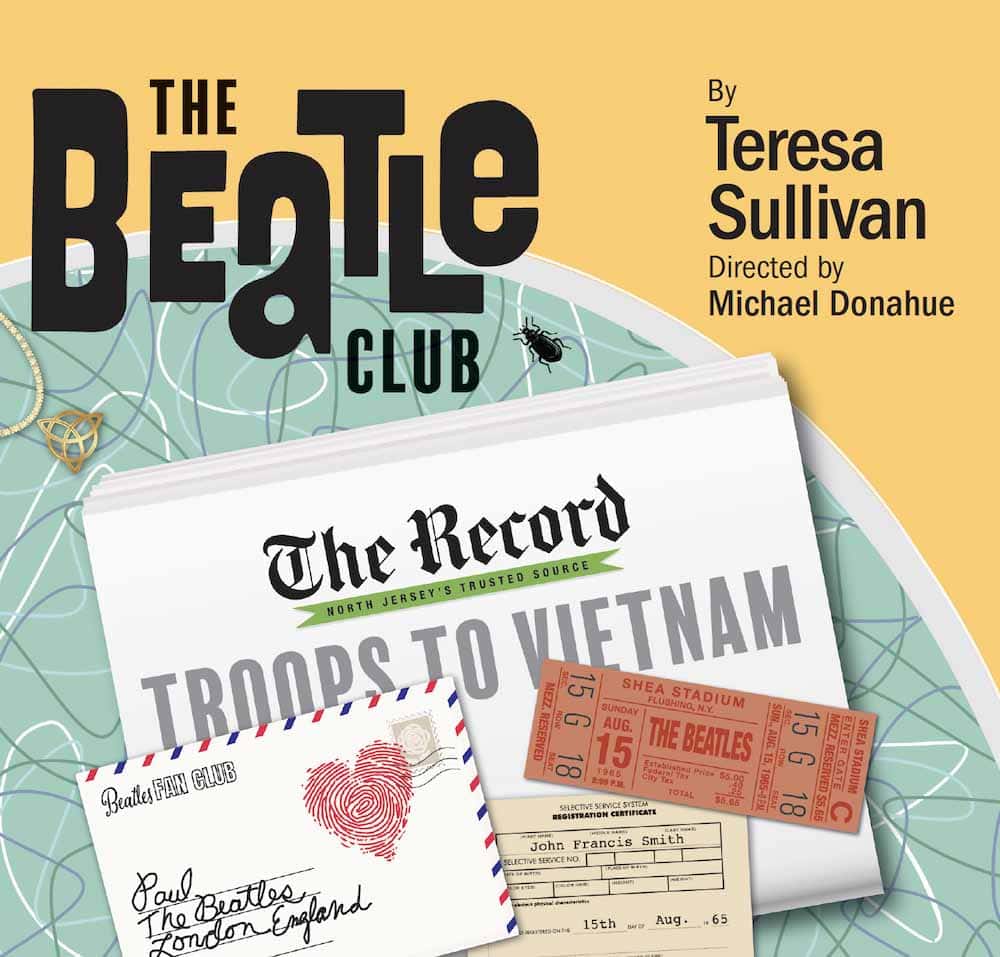 The Beatle Club plays through October 23, 2021, at Providence Players of Fairfax performing at the James Lee Community Center Theater – 2855 Annandale Road in Falls Church, VA. For tickets ($21 adults; $18 students and seniors), call 703-820-9771 or purchase them online.

All patrons, actors, and volunteers must comply with Fairfax County and Providence Players’ policies and protocols for COVID-19.

The Beatle Club
by Teresa Sullivan