Pop quiz: If you set out to train young musical theater artists, whose canon would you sample?
A) Rodgers and Hammerstein
B) Stephen Sondheim
C) Jerry Herman
D) Andrew Lloyd Webber
E) Kander and Ebb
F) All of the above

With The Musical of Musicals (The Musical!), the answer is overwhelmingly F. But the grade for Reston Community Players’ apprentices as they test the waters of showmanship through their boisterous interpretation? A++.

This satirical work — the brainchild of Eric Rockwell and Joanne Bogart that originated off-Broadway in 2003 with the tagline “Sometimes, one musical isn’t enough” — packs five times the theatrical punch, and pulls no punches, in mocking the Great White Way’s greatest collaborations. At its core is possibly the oldest bit of melodrama known to humankind: the vaudevillian “I can’t pay the rent!” skit, so timely in these times of mass evictions. A damsel in distress bemoans her sad predicament (“I can’t pay the rent!”), shrinks from a villainous landlord (“You must pay the rent!”), and holds out for rescue by a Dudley Do-Right type (“I’ll pay the rent!”).

The familiar hook gets recycled five times here, reimagined in the styles of R&H, Sondheim, Jerry Herman, ALW, and Kander & Ebb — ever dancing on the edge of musical and lyrical plagiarism. The Musical of Musicals is traditionally performed with four actors and a piano, but the genius of this production is in marrying such hilarious, derivative material to an ensemble of 12 gifted, gung-ho teens. Meet the inaugural class of RCP’s Apprentice Program, helmed by producer Kate Keifer and director-choreographer Jolene Vettese.

It’s a crash course in musicals, highly educational for both students and audience. But whether you’re a theater novice or theater nerd, you’ll need no footnotes to get these gags. Light bulbs will flicker in your brains all night in tune/time with the razzle-dazzle onstage.

Your syllabus starts with “Corn,” set in Kansas but primarily an ode to Oklahoma! — Rodgers and Hammerstein’s pioneering American musical — complete with dream ballet. Cassidy Loria establishes a bold, beautiful tone as Big Willy, our hero, singing her sonnet to corn. In keeping with an old-style musical, the backdrop is painted, rows of cornstalks are planted, and a farmhouse spins from exterior to interior views. (And wow! The sets, designed by Andrew JM Regiec, get more scrumptious and innovative with every scene.)

In succession, we meet the darlin’ damsel June (Jane Keifer); leering landlord Jidder (Eli Smigielski), who stalks June through the stalks; and sage Mother Abby, her riff on The Sound of Music’s “Climb Ev’ry Mountain” superiorly sung by Kira Woldow (in a nun’s habit). All of R&H’s works get mashed up in it, and then the players get sprinkled into other scenes.

You get the gist. Gender-fluid actors mixing fluidly as leads and ensemble in a talent showcase. A note about structure, though, which these kids helped illuminate: The “Abby” character — a wise voice not always present in the “I can’t pay the rent” plot — delivers the show-stopping tune in each iteration, the so-called 11 o’clock number, the musical thread sewing things together. Thus, Kira commands in “Corn.” Kalyani Srivastava slays as the barstool hedonist Abby in “A Little Complex.” Glittery Anoushka Sharma descends again and again from the staircase as Auntie Abby. (Hello, Abby! Hello, costume change!) Elizabeth Cha, pretending to be over the hill, takes things over the top as Abigail Von Schtarr in “Aspects of Junita.” And Mayumi Gant vamps gloriously as a jaded Fraulein Abby in “Speakeasy,” the show’s nod to Kander and Ebb (Chicago, Cabaret). “Speakeasy” is also cleverly translated into German on the set as Flüsterkneipe, the name of the cabaret where Jahlil Greene embodies emcee Jütter with slinky style.

So many stars, so many jokes, so little time. Madelyn Regan steps up in Act II as superstar Junita — the staircase transforms into a balcony and we at once absorb Lloyd Webber’s hero-worship obsession through Evita, Jesus Christ Superstar, Norma Desmond (Sunset Boulevard), even Christine (sing for me!) from The Phantom of the Opera.

Dripping with wit, Myiah Miller anchors the Sondheim session as tortured artist/sadist Jitter, who’s part Sweeney Todd and part Seurat (from Sunday in the Park With George). Keyla Niederstrasser flits about as Jeune, illustrating for this critic that perhaps Sondheim can be underhandedly sexist, painting his female characters as ditzy, a thesis worth exploring. Brava, Keyla.

(Girl power and female empowerment run through this production, actually. Pay special attention to the end of “Corn,” after a hysterical June declares: “Why, sometimes you can get hit, hit real hard, and it feels like a kiss!” I won’t give it away, but props there and elsewhere to properties designer Mary Jo Ford.)

As dazzling as all these “Broadway babies” are, Vettese deserves a standing O for corralling and coaching them. Through her midwifery, they seem born to the stage, more comfortable and polished than your average adult community theater player, and way funnier than the cast recording. Vettese elevates the silliness to a jaw-dropping level of sophistication, each line craftily choreographed. And the performers throw themselves into every move with unbridled glee — grapevine skiddoos, Fosse-esque articulations, full-blown trenches. The action begins and ends with a bouncy chorus line — the finale unapologetically lifted from A Chorus Line. (Instead of “One,” it’s “Done” — over and done — “It’s over done for theatre cognoscenti!”)

Due to COVID, all the actors are masked, but with peekaboo see-through plastic over their mouths, enabling a tad more expression while blurring their identities. Their lines, miraculously, are not blurred, though, as in most cases their diction shines through (thanks, sound crew, including apprentice sound assistant Daniel Prothe). The mask accessory oddly makes the troupe feel more uniform, each character interchangeable, giving extra power to the smart costume design by Lori Crockett and apprentice assistant Grace Drost. Everyone’s a Phantom! The basic ensemble is leotard black, with looks that get dressed up as they go. For the Rodgers and Hammerstein section, chorus members don “Many a New Day” pantaloon skirts and matching straw hats. During Andrew Lloyd Webber’s mock-opera set, they sport devotional tunics with sashes of many colors.

From behind the piano, music director Lucia LaNave transposes character, befitting each musical attitude. (She’s the pianist for seven of the 10 performances. Tammy Lydon accompanies the October 22–24 shows.) Another apprentice, Elliot Baird, serves as assistant music director. The notes and harmonies they’ve teased from each teen are impressive, and the gusto with which they’re sung more than makes up for any lack of development. Again, an endorsement for this brilliant choice of material for young thespians. Satire is a license for risk-taking, and every gamble here yields a huge payoff.

Applause, applause for technical co-directors Sara Birkhead and Dan Widerski, stage manager Kaiti Parish, and the entire production crew. Lighting, designed by Franklin Coleman, is a study in contrasts, especially when moving from the bright daylight of a Rodgers and Hammerstein picnic to the harsh menace of Sondheim’s Woods. Sound designer Richard Bird populates the barnyard, plumbs eerie depths, and puts on the ritz with seamless skill. Enhancing the team are apprentices Morgan Weis (onstage technician) and LJ Murphy (assistant set dresser). Techies get their moment in the spotlight — well, the dark — during an interlude before the Kander and Ebb spoof. Because what musical theater education would be complete without a nod to the “backstage musical”?

There’s something so deliciously meta about this experience, it begs for repeat viewings. I know we at DC Theater Arts have said it countless times before, that after a long pandemic intermission, theater is back. Honestly, until now, I didn’t believe it. Theater is not only back — it has a future. Here’s your chance to catch tomorrow’s brightest stars while catching up on a compendium of musicals you’ve surely, sorely, missed. A risk worth taking. 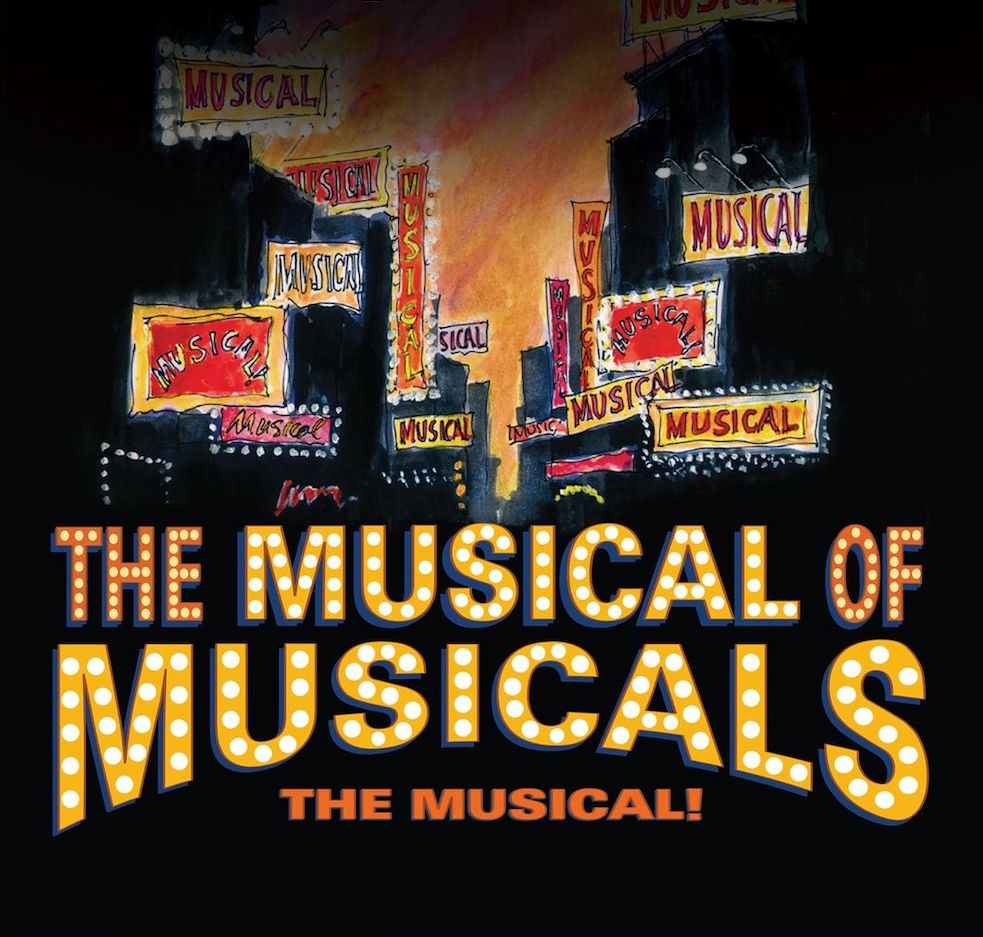 The Musical of Musicals (The Musical!) plays at Reston Community Center’s CenterStage, 2310 Colts Neck Road in Reston, VA, through November 6, 2021. Curtain time is 8 pm except for October 24, 30, and 31 matinees, with a 2 pm curtain. For tickets ($20 adults, $15 seniors/students), contact the box office at (703) 476-4500 x3 or at restonplayers.org. CenterStage is accessible and offers listening devices for the hearing impaired. RCP’s COVID-19 policies and protocols are here.