Wait Until Dark, a 1960s thriller by Frederick Knott, has a history of attracting good actors. Lee Remick and Robert Duvall led the cast of the original 1966 production, with Audrey Hepburn and Alan Arkin taking over their roles in the 1967 movie. Fifty-five years later, the Little Theater of Alexandria (LTA) shows that good acting and taut direction can continue to fuel an entertaining production.

Mel Gumina brings a consistently high level of energy to the lead role, Susy Hendrix, a recently married blind woman living in a basement apartment in Greenwich Village. The script affords Susy the opportunity for a significant character arc in the two-day time frame of the play, and Gumina takes full advantage. Beginning as a rather hyper housewife, consigned to domestic chores by her empathy-challenged husband, Sam (Ryan Washington), she grows first into a savvy detective, sniffing out the bad guys’ plot; next figuring out how to con the con artists; then strategically preparing her defenses; and ultimately becoming something of an action hero.

As a sighted actor playing the role of a blind woman, Gumina has the task of moving believably as an individual with that disability. She pulls it off.  She moves around her home with cautious confidence, having memorized the normal position of objects in the room. But when something is out of its usual position (e.g., a chair moved from the table to another location), she stumbles over it. The character’s surprise and frustration at encountering something out of place do credit to her commitment to the role and the positioning of objects and timing developed with director Heather Benjamin.

Any good thriller needs a villain, and Harry Roat (Adam R. Adkins) is as villainous as they come. Roat is a smorgasbord of a character, being by turns charming, clever, humorous, devious, polite, calculating, and psychopathically homicidal. Roat wants to be the center of his universe, manipulating others at will, and Adkins makes him as gleefully evil as any Bond villain, down to some Snidely Whiplash-style chortles.

Roat’s henchmen in the criminal scheme — the MacGuffin driving the plot is the search for a heroin-filled doll — are Mike Talman (Brendan Quinn) and Sgt. Carlino (Brendan Chaney), a couple of down-on-their-luck petty crooks. Mike claims to be an old buddy of Sam, and he is perhaps too skilled for his own good at persuading Susy that he is a kind, supportive friend.  As Kurt Vonnegut once wrote, “We are what we pretend to be, so we must be very careful about what we pretend to be.” Carlino, who approaches Suzy as a faux police detective, is a none-too-smart schlub to whom Chaney gives a convincing New York flavor.

One of the bright spots of the production is Gloria, the sometimes bratty, other times kind, upstairs neighbor girl who sometimes bedevils and other times assists Susy. Played by Julia Stimson on opening night (Juliet Strom plays the role in some performances), Gloria becomes an intrepid accomplice in Susy’s efforts to defeat the criminals. Her comic timing earns a couple of the evening’s biggest laughs.

LTA’s technical work is up to the group’s well-established standard. The realistic set, designed by Julie Fischer, pictures a quite high-ceilinged basement apartment, with frequently used stairs coming down from an upper entrance (footfalls on the stairs are an important plot device at times). Set dressings (Allison Gray-Mendes, designer) — prominently the wringer washer and “icebox” (i.e., refrigerator) — also play an important role in the plot, as well as being, perhaps, evidence for the proposition that landlords in pre-gentrification Greenwich Village were disinclined to update their kitchens.

Lighting is crucial to a play about what happens to blind and sighted characters in the dark. The designers (Jeffrey Scott Auerbach and Kimberly Crago) succeed at the delicate balance of making the final scene convincingly menacing and shadowy while providing just enough light for the audience to follow what is happening. There are a few oddities in the sound design (Janice Rivera, designer), such as ambient traffic noises at the beginning of the play that are never heard again and a strikingly loud refrigerator motor, but the insertion of briefly ominous music cues at tense moments is effective, all the more so for not being pervasive throughout the show.

Much credit is due fight choreographer Stefan Sittig for the very convincingly violent final confrontation between Susy and Roat.

An old-school thriller like Wait Until Dark is a kind of machine, with parts that move at varying speeds. (Some elements do not quite make sense, like the frequently unlocked door of the apartment, which drove Roger Ebert to distraction in his review of the film. “The bad guys come in and out of the apartment like finalists in a revolving door sweepstakes,” he complained).  Benjamin does a fine job of keeping the machine moving at a pace that allows the audience to fully understand its operation without getting bogged down, particularly in the highly expository first act. The pace then accelerates toward its conclusion in the more action-filled second act.

Benjamin and the cast also do well at subtle but telling small details. I was struck, for example, by an instant in which Susy and Mike, sitting on the sofa, move almost to touch hands, then swiftly pull back. A nice character moment for both. The commonplace that specificity matters is well served in the production.

In her program note, Benjamin draws an interesting analogy between Susy’s plight — feeling threatened and disoriented and having to adjust quickly to changes in what had been a comfortable and secure situation — and what we have all had to contend with during the pandemic. Whether on this level or simply as an enjoyably suspenseful evening of theater, LTA’s Wait Until Dark rates as a thoroughgoing success. 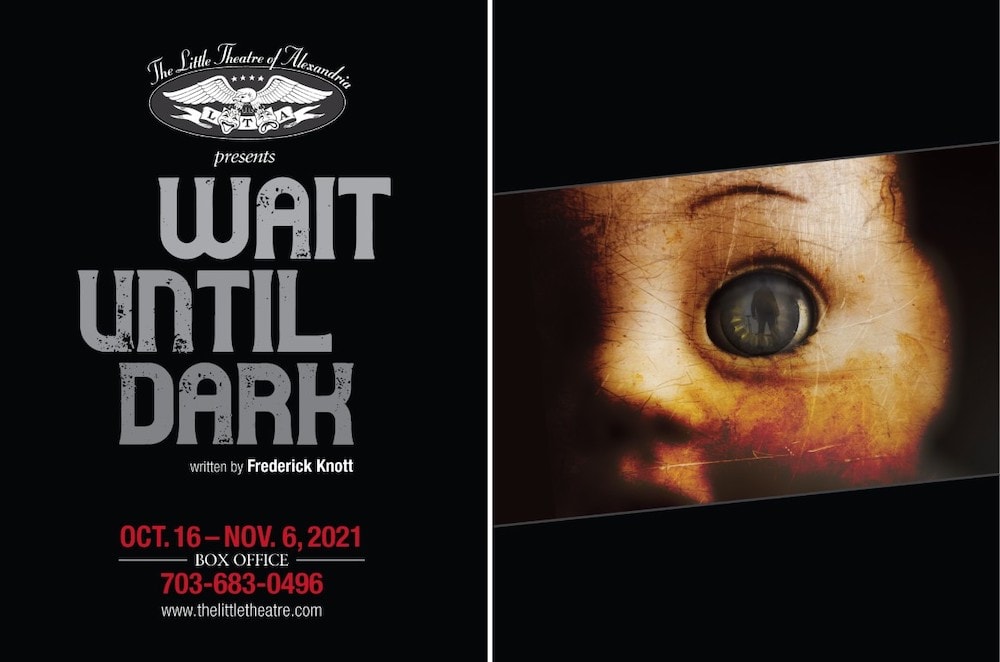 Wait Until Dark plays through November 6, 2021, at the Little Theater of Alexandria, 600 Wolfe Street, Alexandria VA.  The play runs two hours, five minutes, with one intermission. Tickets are available online.

COVID Safety Policy: Audience members and all attendees to all performances of all shows will need to provide proof of COVID-19 vaccination, or proof of a recent (within 72 hours) COVID test. See the full policy here: LTA COVID-19 Vaccination Attendance Policy.