In Newport, Rhode Island, it is 1894, at the height of the gilded age, and social secretary Clara Rutherford (Michelina Pollini) is interviewing prospective clients. She is ambushed by Elijah Boyd (Riley Mulvihill), a bachelor with an unorthodox proposition. Elijah, who goes by Eli, is a self-made man with an abundance of new money and he is determined to become a member of the illustrious “Four Hundred” — the crème de la crème of Newport aristocracy. The problem is that he is anything but refined and not only does he know practically nothing of the customs and courtesies of the super-rich; those he does know he seems determined to flout. He will pay Clara any sum to become his social secretary. So begins a classic story reminiscent of a gender-swapped My Fair Lady.

Fans of Downton Abbey and its relatives will delight in the dual yet intersecting stories of the bourgeois upstairs and the servants down below. Ellen Price (who both wrote and directed the show) has no shortage of barbs for the absurdity of high living. The poignant and timeless moments of the story emerge largely through the character of Eli. As a rags-to-riches man and son of Scottish immigrants, he never forgets his humble beginnings and in the height of a recession hires more servants than one family could ever need. It’s a reminder to all that those with means are in a unique position to help those without; it is simply a matter of character. What it means to be a good person and what matters most in life are strong themes throughout the show.

Costumes by Judith Harmon, Mikayla Kirr, and Lori Crockett are an immediate standout. Every member of this 30-person cast was dressed to impress with elaborate costumes, a rainbow of summer colors, and consistent looks among the servants. Another technical standout is the backdrop of the set by set designers Ellen Price and Scott Ruegg and set artist Terry DiMurro. The stunningly bright, two-dimensional backdrop on a useful platform struck a perfect chord for this storybook romantic comedy, lending itself immediately to upstairs and downstairs living spaces to heighten the class conflicts.

Unfortunately, this smart set was underutilized. A lot of time was spent opening and closing curtains and moving larger than necessary set pieces for often very short vignettes. Simple lighting changes could just as effectively have indicated shifts in location. Lighting designer and operator Joe Pecsi would have been more than up to the task based on the seamless execution of the current design. Regardless, hats off to stage manager Joe Campanella and stage crew Geoff Hardy and Ryan Hiese for orchestrating and executing this feat.

Practically everyone in this large ensemble had one or more standout moments, and it would be impossible to list them all. Highlights include the indefatigable Caitlin Costello (Beth) and Courtney Garofolo (Kate), who were a continuous source of wicked delights as they navigated the audience through the latest gossip. Stuart Fischer (Simpson) and Sally Flores (Mrs. Peters) played off each other nicely as the caring yet always competent heads of the household, offering one of the more intriguing moments of the play when they remind us that those over the age of 30 are still interested in romance. Anthony Pohl as Nikolay Kotov, dance instructor, was a scene-stealer every time he waltzed on the stage.

Using Price’s script, Pollini and Mulvihill built divergent yet engaging portraits of two self-made, independent people making their way in a world where they are outsiders. Pollini’s Clara was consistently level-headed and serene, providing a clear contrast to Mulvihill’s high-energy hamming up of both characters and audience. Their romance was both humorous and touching.

Those who aren’t ready for summer to end will find warmth, love, and laughter in this new script by a female playwright. The Social Secretary is a romantic beach read brought to life through Sterling Playmaker’s triumphant return to live theater. 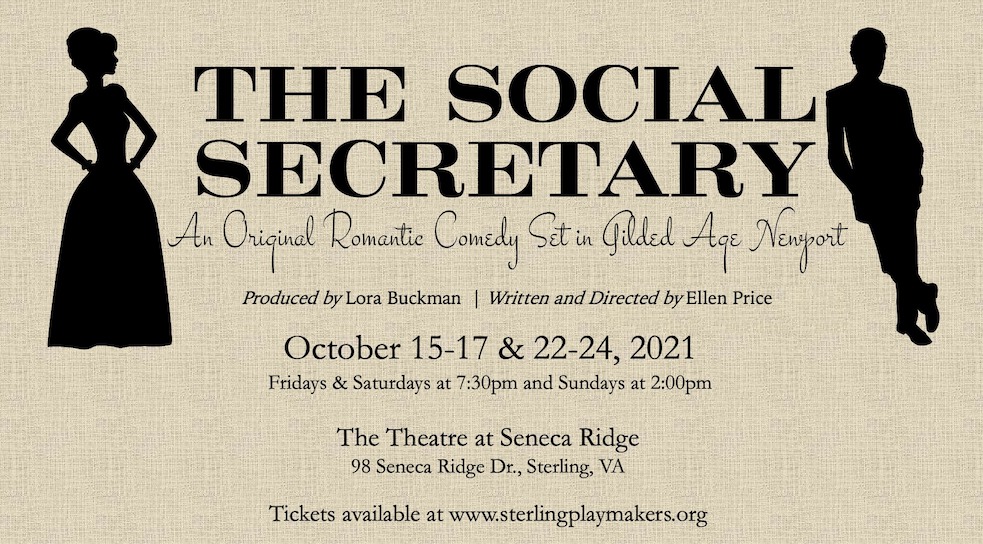 The Social Secretary plays through October 24, 2021, at The Theatre at Seneca Ridge, 98 Seneca Ridge Dr, Sterling, VA. For tickets ($15 general admission), buy them at the door or purchase them online.

COVID-19 safety precautions will be in place. Please see our most up-to-date policies and procedures related to COVID. These protocols are subject to change at any time based on the venue and guidance from Federal, state, or local government.