There are times when a young girl can change the world. Ruby Bridges (1954–) accomplished a victory for civil rights in America in 1960, when she became the first Black student to integrate an elementary school in the South. Her age at the time? Six. Greta Thunberg, 18, as an unknown Swedish 15-year-old, began her climate change protest with a school strike. She has now achieved global fame. Pakistani activist MalalaYousafzai, now 24, advocated publicly for the education of girls. In 2012, at age 15, she was shot in the head by a member of Pakistan’s Taliban. After many surgeries and a long recovery, she established the Malala Fund, a charity dedicated to giving every young girl the opportunity to attain the future of her choice. In December 2014 she became the youngest person ever to receive the Nobel Peace Prize.

GALita, a program of GALA Hispanic Theatre for the whole family, is presenting La llamada de Sylvia Méndez: Separate Is Never Equal, celebrating another young girl whose story we should all know: Sylvia Méndez. Since 1976, GALita has produced bilingual theater for young audiences. Its goal: to “inspire a sense of joy, discovery, pride and identity in our community’s children.” In a time when the debate over critical race theory is pervading the political airwaves, it is essential to acknowledge how initiatives against racism can and must succeed.

In California during the mid-1940s, schools were segregated. Nine-year-old Sylvia, who was Mexican American, was forced to attend a separate and inferior school, Hoover Elementary. In 1945, the Méndez family, along with four other Mexican American families, filed a class-action lawsuit against four Orange County school districts on behalf of roughly 5,000 Hispanic American schoolchildren. The Méndez plaintiffs won, and the schools appealed. The case gained support at the appellate level from Thurgood Marshall, lead attorney of the NAACP (and later Supreme Court Justice). He filed an amicus brief, which contained arguments he would later use in Brown v. Board of Education (1954) to successfully attack the “separate but equal” doctrine, effectively ending school segregation in America. In 2011, Sylvia Méndez was awarded the Presidential Medal of Freedom by President Barack Obama.

Rebecca Medrano, Co-Founder and Executive Director of GALA, told me at the performance of La llamada de Sylvia Méndez that immigrant mothers from the local Bancroft Elementary school were bringing their children. It was great to see these under-twelves participating and enjoying the experience; one was even lucky enough to name a doll that was used in the production!

Elena Velasco’s direction is especially inventive in combining movement, dance, and music. The script has been given a handsome physical production, with lighting design by Alberto Segarra, sound design by Konstantine Lortkipanidze, and costume and properties design by Tessa Grippaudo

I had the opportunity to talk to the playwright, Cornelia Cody, who wrote Picasso and VolcanO for GALA and who is also a poet and author of childrens’ books. She plans to highlight some themes and add the Presidential Medal of Freedom story to the next presentation, which will be in March.

In the end, the alphabet blocks spelled out the message of the day: J U S T I C I A.

There was an after-show discussion, and the children at the GALA theater were full of questions. They were encouraged to write to the real Sylvia.

The next time you see a young girl, on the street, or at a party, or just at home with the family, take a second look. She may just change the world. 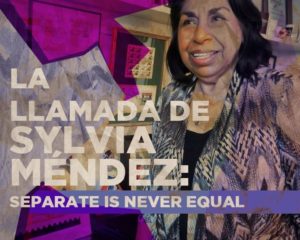 La llamada de Sylvia Méndez: Separate Is Never Equal presented by GALita was performed in Spanish with English surtitles October 16 to 23, 2021, at GALA Hispanic Theatre, 3333 14th Street NW, Washington, DC. The family-friendly show will be available virtually on-demand in mid-November 2021 and will be performed onstage again at GALA Hispanic Theatre on March 12, 19, and 26, 2022. Tickets for the spring 2022 run ($12, adult; $10, child 2–12) are available now online.

All patrons must wear a mask. Proof of vaccination or recent negative COVID test required for patrons ages 12 and up. For more details, see GALA’S COVID-19 Safety Policy.