In this regional premiere, N represents a word so reprehensible it can’t be uttered without emotional repercussions. This compelling piece excavates segments of theater history that have been long forgotten, tossed to the wayside, and ignored. Playwright Adrienne Earle Pender sheds light on the fascinating connection between renowned playwright Eugene O’Neill and a stellar Black actor, Charles Gilpin, who brought O’Neill’s play The Emperor Jones to prominence.

Kevin E. Thorne II portrays Gilpin with a quiet, stalking fierceness. He exudes Gilpin’s love for theater while stuck in menial jobs and occasional minstrel shows to make ends meet. When Gilpin gets a chance to perform in the new work of a relatively unknown playwright, Eugene O’Neill, his excitement is palpable. As Gilpin, Thorne takes on an erect bearing in his frayed military uniform (nice costuming by Paris Francesca) and listens attentively to drumbeats that speak to him as Brutus, a role he defined in Emperor Jones. Over time, though, the degradation of having to say the “N-word” throughout the script dampens the excitement of being in the show, and Gilpin is compelled to take a stand. With the play set in the early 1920s, one can imagine the end results of that showdown.

Although Lolita Marie as wife Florence is saddled with a rather one-dimensional supporting role, Marie brings her usual charm and resilience to her character and shines. As Florence, she is her husband’s number one fan, supporting him with rock-steady devotion. Florence is the voice of “reason,” pleading for Gilpin to accept what he’s offered, no matter the indignities — she’s borne the brunt of racial nastiness herself and demonstrates the willpower to “keep on keeping on.” Florence also has an unexpected interchange with O’Neill, pleading her husband’s cause to secure one more chance to take on the role. Her presence and final lines in the play capture the essence of what’s transpired, and she hints at the cultural amnesia that will bury the spectacular achievements of Charles Gilpin in history.

Finally, Jared H. Graham handles the daunting role of the serious brooding Eugene O’Neill, with aplomb (liquor always as the ready of course). O’Neill obviously wants to do the right thing and faced considerable backlash for even writing such a piece, but he is determined to present the language in line with his own vision. The dialogue between the two artists is dynamic and charged. Director Nadia Guevara has a heightened awareness of the play’s intense underlying sentiments and brings a choreographer’s sensibility to the characters’ movements, entrances, and exits.

My only quibble is that the writing skimps on the interior struggle of the artists. Gilpin had performed in numerous smaller productions. I would have liked to have an inkling of what propelled him to pursue the arts despite the daunting conditions. He had his flaws but was so determined he put his livelihood on the line when he couldn’t keep using that word.  References to the actor who subsequently took over the role and catapulted Emperor Jones to superstardom were startling. Catch the show and connect the dots. The implications are stunning.

The beautiful set designed by Matthew J. Keenan is a work of art where huge tropical trees line the backstage and resplendent green leaves and lush foliage fill a forest, beautifully lit by lighting designer Venus Gulbranson. Sound designer Cresent Haynes worked overtime with the drums and “tom-toms” that sounded and felt like the percussionists were directly off stage. The rhythms fit beautifully in expressing the action onstage, reflecting The Emperor Jones play within a play, and Gilpin’s feelings of resentment for being unheard and disregarded for standing by his integrity and choices.

Some names resonate through history and situate themselves in the lexicon of cultural legacy. But as this play beautifully reflects, there are countless others whose names and deeds have been lost through history. N had me rushing to Google Charles Gilpin with newfound appreciative awareness.

“One hundred years ago, prolific American playwright Eugene O’Neill’s expressionistic work The Emperor Jones caused a flurry in the theatre scene and launched actor Charles S. Gilpin to stardom,” notes production director Nadia Guevara in the program. “He made a splash as the first African American actor on Broadway as Brutus Jones in The Emperor Jones — a role that broke him out of the stereotypes of the time, while also still trapping him in cliches and, much to his torment, the repeated use of the N-word.” 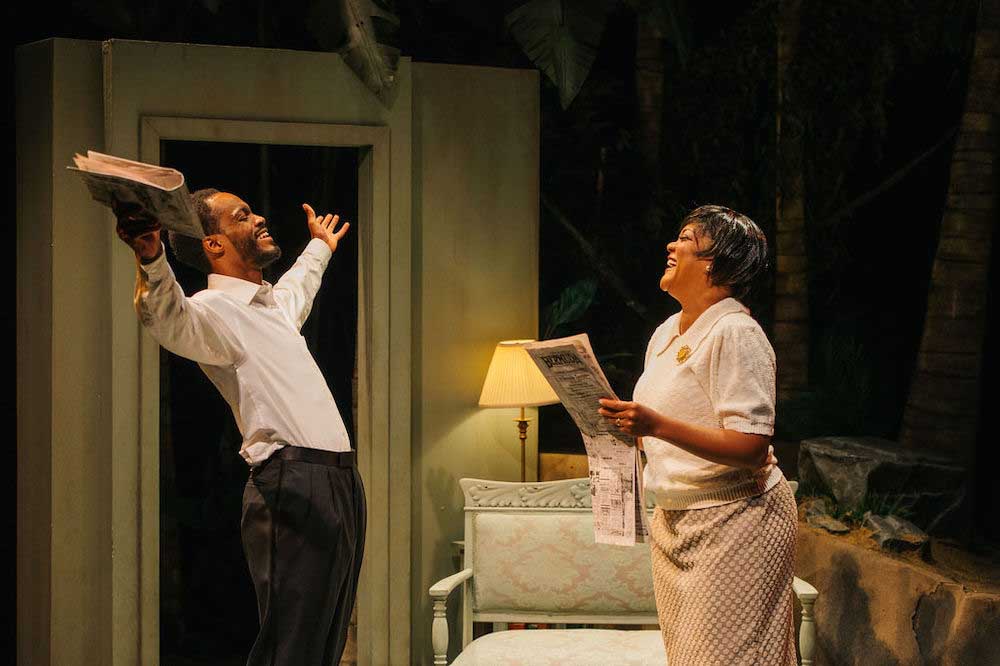 Those who think that the castigation of groups of people is a thing of the past need only review current headlines. Discrimination practices may not be as blatant, but examples of disregarding people as the “other” abound. Remembering unknown and unspoken history helps shed light on uncomfortable realities. Only by seeing and recognizing the underlying forces that allowed discriminatory practices to be accepted as normal and ordinary can we progress. With a single letter, N is a touchstone and provides a glimpse of the mentality that some have felt is way behind us but in reality, the kernels are really just beneath the surface. It’s only been in the last several years that the term “N-word” has circulated in the vernacular to keep people from saying the word. That playwright Adrienne Pender is a descendant of Charles Gilpin adds even more urgency and poignancy to the production.

N is a wonderful choice to celebrate Keegan’s 25th Silver Anniversary as it reflects the company’s commitment to “explore the human condition and foster connections and positive change.” Their plans for ongoing discussions pertaining to the show are also a welcome path to connection, something we need now more than ever.

Running Time: 75 minutes with no intermission.

To learn about the Keegan Theatre’s policies and procedures around keeping patrons, artists, and staff safe and healthy, visit their Health & Safety page.