Just as the Civil War plunged our nation into a heart of darkness and uncertainty, the present day challenges the human spirit. Then as now, people have always found a way through their deepest valleys. In 1869, a few years after that war, novelist Louisa May Alcott wrote a semi-autobiographical — and feminist-themed — novel about the March family of Concord, Massachusetts, and in 2005 lyricist Mindi Dickstein, musician Jason Howland, and musical book writer Allan Knee created Little Women: the Broadway Musical, which was magically produced into an evening of delightful entertainment by the University of Maryland School of Theatre, Dance, and Performance Studies.

Directors Alvin Mayes and Scot Reese harnessed the talents of outstanding players such as Jordan Embrack (who played Margaret “Marmee” March), Anton Van De Motter (Laurie Laurence), and Leilani Clendenin (Jo March) to bring forth an emotionally upbeat musical to the audience. The directors also brought topical subtext to the show with non-traditional casting of some of the actors. Marci Shegogue, musical director, and Matré Grant, associate musical director, gave the show the musical backbone on which the actors’ singing performances grew.

The show followed the adventures and misadventures of one Jo March, who wanted to write and publish stories with “violence and seduction on every page!” Played with panache by Clendenin, Jo would get her sisters to act out her stories in the March family living room.

Embrack excellently played matriarch Marmee March, waiting for the return of her Union Army Chaplain husband, with a loving authority. Carolina Tomasi’s Meg March was ready to travel the traditional path of marriage and love. The fantastic Amelia Yasuda made Beth March a voice of reason, and the talented Karenna Foley brought the necessary brattiness to little sister Amy March, who hated Jo’s stories enough to burn one of them.

The word dazzling comes to mind when I think of the musical numbers. “Our Finest Dreams” was sung with a hint of Christmas cheer by Yesuda, Clendenin, Foley, and Tomasi.

I enjoyed the lovelorness of Embrack’s “Here Alone.” My foot tapped rhythmically to “Delighted” sung by Embrack, Yasuda, Clendenin, and Tomasi.

Not to be confused with a song by 70s pop group ABBA, the uptempo number “Take a Chance on Me” was brought to life by Van De Motter. “Off to Massachusetts” featured the delightful dueting of Yasuda and Thanicatt.

The title of the musical number “Astonishing” contains the adjective I need to describe it, as it was gorgeously sung in a heartfelt solo by Clendenin to close out the first act.

The company gloriously opened the second act with “The Weekly Volcano Press.” Schwartz brought strong vocals to “How I Am.” I could feel the love in “The Most Amazing Thing” by lovebirds Laurie and Amy with vocals by Foley and Van De Motter.

One of the finer solos was Clendenin’s “The Fire Within Me,” which displayed a feminist determination to succeed; and I was moved by her and Schwartz’s duet, “Small Umbrella in the Rain.”

Costume Designer Ashlynne Ludwig more than earned her keep with the Union Army uniform she put Campbell in, and the ball gowns she put Clendenin and Yasuda in. I loved how Lighting Designer Michael Winston spotlighted actors such as Embrack as they sang their solos, and Sound Designer Sam Crawford worked magic with the ocean sounds of the beaches of Cape Cod.

With young stars like Van De Motter, Embrack, and Tomasi and direction by Mayes and Reese, this show will leave audiences smiling and — at least for two hours and 30 minutes — make audiences forget the turmoil of these days. 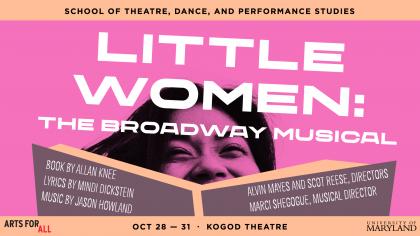 The Clarice COVID health and safety policy is here.

Little Women: the Broadway Musical
Book by Allan Knee
Lyrics by Mindi Dickstein
Music by Jason Howland
Based on the novel by Louisa May Alcott