Commissioned by MTC as part of the Bank of America New Play Program, the world premiere of Morning Sun by Tony Award-winning English playwright Simon Stephens (Sea Wall; Heisenberg; The Curious Incident of the Dog in the Night-Time), playing a limited Off-Broadway engagement at New York City Center, offers a dated and dismissive male perspective on the mundane lives of three generations of ordinary women spanning over 50 years. There is a lot of banal talk, no dramatic action, and not a hint of female empowerment in their unremarkable existences in a Greenwich Village walk-up.

Framed in the device of the decades of a woman’s life flashing before her eyes on her deathbed, the three-hander stars TV’s four-time Emmy winner Edie Falco (The Sopranos) as Charley McBride, Tony Award winner Blair Brown (Copenhagen) as Charley’s mother Claudette, and Tony nominee Marin Ireland (Reasons to Be Pretty) as her daughter Tessa. The latter two also represent an assortment of other characters recalled by Charley, which is not always immediately clear in the often cloudy script, performances, or Lila Neugebauer’s minimalist direction.

Brown’s portrayal of the grandmother presents a straightforward indication of her age and generation, as does Ireland’s more youthful, animated, and engaging delivery of the daughter. In her role as Charley, Falco has the greatest number of lines (and tripped over several of them at the performance I attended), but induces little likability or empathy for her central character, whose remembrances of the key moments in her life are largely uninspiring and regretful – bad relationships, bad decisions, loss, conflicts, and estrangement. And then she dies, without leaving so much as a mark on the world or seeing any of the three having effected any positive change in their lives, in this very disheartening view of the average NYC woman, whose passivity defines her and whose low points far outnumber the high.

As with the theme and characters, the show’s artistic design displays the inspiration of the eponymous 1952 modern realist painting Morning Sun by Edward Hopper, whose frozen female figure fascinates Charley. The cold and uninviting set by dots is in keeping with Hopper’s dreary room and drab colors, as are Tom Watson’s basic hair and wig design and Kaye Voyce’s nondescript costumes that remain unchanged. Lap Chi Chu’s lighting reflects the illumination that filters in from the world outside and sound by Lee Kinney and Daniel Kluger identifies the deceased characters with voices that echo in the emptiness.

This weak and dismal view of women in Morning Sun is not my cup of tea; I take mine much stronger.

Running Time: One hour and 40 minutes, without intermission. 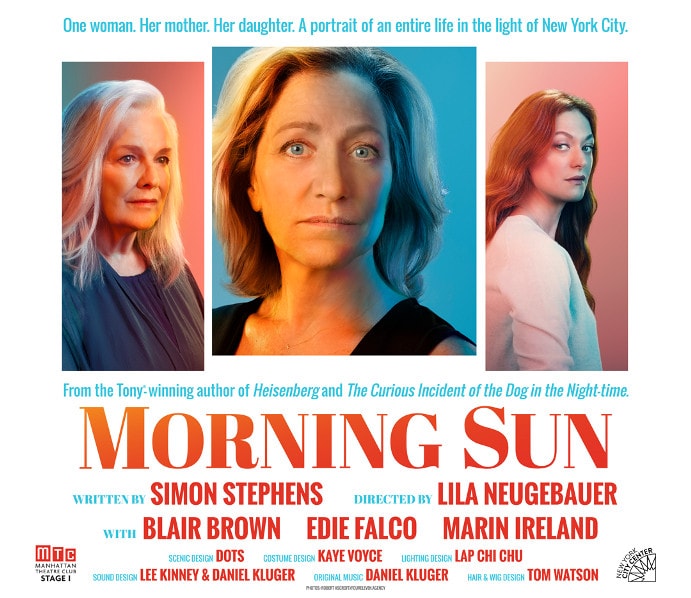 Morning Sun plays through December 19, 2021, at MTC, performing at New York City Center, Stage I, 131 West 55th Street, NYC. For tickets, beginning at $99, call (212) 581-1212, or go online. Audience members must provide proof of full COVID-19 vaccination (two weeks after receiving a one-dose vaccine or both doses of a two-dose vaccine, approved by the US Food and Drug Administration or the World Health Organization) and approved masks must be worn by audience members, staff, and crew at all times while inside New York City Center.