Getting through adolescence can be a challenge, especially when your classmates and teachers think you’re “weird” and your parents and priest don’t really understand you. For Trevor Nelson – a suburban middle-school student in 1981, who loves show biz, is obsessed with Diana Ross, and dreams of a life in musical theater – his coming-of-age and coming-out story isn’t always easy, but it takes him on a journey of self-discovery and sexual identity that empowers him to be who he is, to continue to live his life with purpose and pizzazz, and to relish his vision of where he’ll be ten years in the future. Go Trevor!

Based on the 1994 Oscar-winning short film written by Celeste Lecesne and directed by Peggy Rajski, which led to the creation of The Trevor Project in 1998 – the world’s largest 24/7 crisis intervention and suicide prevention lifeline (866-488-7386) for LGBTQ youth – Trevor the Musical by Dan Collins (book and lyrics) and Julianne Wick Davis (music) is making its Off-Broadway debut at Stage 42. And though it’s no longer 1981, the central issues of bullying and lack of acceptance remain timely and resonant today, in a show that encourages and uplifts kids who are made to feel like outsiders (and adults who witnessed it or went through it and can relate).

Directed by Marc Bruni with a predominantly upbeat emphasis on exuberance and humor, the narrative weaves back and forth between Trevor’s fabulous fantasies of glittering production numbers (with vibrant choreography by Josh Prince) and personal appearances and advice from a glamorous Ross in sequined gowns (to whose songs he actively lip-syncs), and the growing reality of not fitting in with the jocks or the mean kids, or even with his own friends. After his notebook, containing the name of his secret crush, is taken and passed around school, the embarrassment and estrangement he experiences lead him to question himself and to envision his own funeral – which happily doesn’t materialize once he meets a kindred spirit and whole-heartedly embraces his true self.

The talented young company is led by thirteen-year-old phenomenon Holden William Hagelberger, making his Off-Broadway debut in the titular role. He is thoroughly lovable and engaging, bringing both the laughs and concerns with sparkling enthusiasm and spot-on emotions through his prodigious acting and vocals, and hilarious moves. Joining him in the roles of Trevor’s fellow students are Aaron Alcaraz, Sammy Dell, Alyssa Emily Marvin, Isabel Medina, Echo Deva Picone, and Aryan Simhadri, delivering rich harmonies and duets, in-sync group movements, and convincingly defining their recognizable adolescent personalities and familiar cliques – with Dell projecting just the right ambivalence in his featured characterization of Pinky, who first befriends Trevor, then turns on him.

Yasmeen Sulieman provides delightful inspiration as Diana Ross, talking kindly to Trevor and singing her popular hits (including, of course, “I’m Coming Out” as the joyous encore), interspersed between the show’s original songs (with music direction by Matt Deitchman, orchestrations by Greg Pliska, and John Miller serving as music coordinator), which propel the well-paced narrative and give lively emphasis to the characters’ range of feelings. Rounding out the adult supporting cast are Sally Wilfert as Trevor’s insensitive teacher and uncertain Mom (who perfectly executes a funny new spin on a running knock-knock joke) and Jarrod Zimmerman as his Dad and Father Joe (whose parodic interpretations are not as compelling).

Costumes by Mara Blumenfeld effectively evoke the ‘80s, the character types, and Trevor’s imaginative daydreams, as does Peter Kaczorowski’s lighting and sound by Brian Ronan and Cody Spencer, in a bi-level scenic design by Donyale Werle that efficiently shifts from to school to home to other key locales in his story.

The Off-Broadway premiere of Trevor is entertaining and important, with a theme that can open conversations and a message that can continue to save the lives of affected LGBTQ youths. Go see it with your class, friends, or family, enjoy it, and be sure to talk about it. 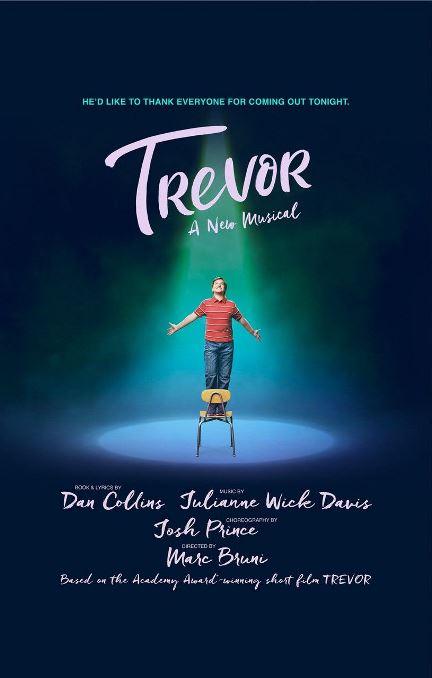 Trevor the Musical plays through Sunday, April 17, 2022, at Stage 42, 442 W. 42nd Street, NYC. For tickets, starting at $59, go online. All audience members must be fully vaccinated to enter the theater and must present digital or physical proof at the door, along with a valid photo ID. Children under 12 and people with a medical condition or closely held religious belief that prevents vaccination may show proof of a negative COVID-19 test. Everyone must wear a properly fitting mask over the nose and mouth while in the theater, except when eating or drinking in designated areas.