In a series of historically based vignettes, The Anthropologists – creating original ensemble-devised investigative theater centered on women’s experiences and marginalized voices – take a sardonic look at the oppressive misogynist and homophobic state laws of the 19th and 20th centuries that prohibited women from wearing pants in public in the group’s insurgent world-premiere comedy No Pants in Tucson, now playing a limited engagement at A.R.T./New York Theatres.

Originally conceived by Founding Artistic Director Melissa Moschitto and Artistic Associate/Performer Mariah Freda, the well-researched show (with production dramaturgy by Linnea Valdivia) is inspired by real-life figures and found texts, and presented by a creative and producing team of women, non-binary, and transgender artists, who expose the personal impact of these archaic gender-suppressive laws (some of which are still on the books) into our present time.

The Fringe-style production (devised by The Anthropologists, with script and direction by Moschitto) employs expressive movement and sound (tap-dance consulting and sound design by Erica Huang), original music (by Freda and Kian J. Johnson), evocative shifts in colorful lighting (by Moneé Stamp), and Vaudevillian-type clowning to make the very serious point about the right of women to control their own bodies. As addressed in the show, in absurdist skits of childbirth and Supreme Court voice-over debates, it’s a right that’s still being denied today in the ongoing fight over abortion laws.

Beginning with the eponymous Arizona law of 1883, the four-person ensemble of lead deviser Freda, Johnson, April J. Barber, and Marissa Joyce Stamps travels through time to recount a chock-full theatrical history lesson on the legal regulations designed to control women, the true stories and words of such actual people as Harry Allen, James/Maude Allen, Jackie Bross, Mary Carter, Ivy Nasur, Emma Snodgrass, Dr. Mary Edwards Walker, and Alice Wilson, who dared to defy them (and to whom the work is dedicated), and the outrageous arrests, fines, imprisonment, and confinement to mental institutions imposed by the courts to punish them for “masquerading” – all done with an eye on the ridiculous.

Cleverly blending time, form, and theme, Irina Kuraeva provides apropos eye-catching costumes and the minimal scenic design of a bare stage hung with Edison bulbs, using hoop-skirt frames as shades. And though the performers eventually, and joyfully, doff the restrictive and uncomfortable clothing for glittering and freeing post-modern attire, they leave us wondering why the government would institute such gender-oppressive laws and if things will ever change, as the battle for equality and autonomy continues. 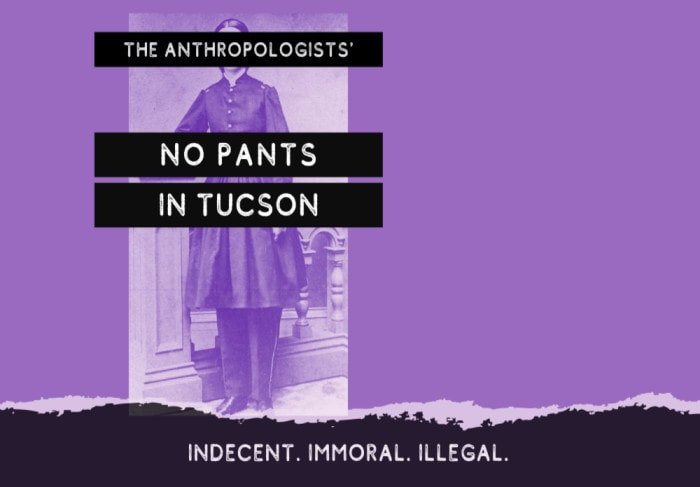 No Pants in Tucson plays through Sunday, November 14, 2021, at the Mezzanine Theatre at A.R.T./New York Theatres, 502 West 53rd Street, NYC. For tickets ($30 general admission; $12 welcome tickets for interpreted section and wheelchair accessible seating), go online. The production is observing full COVID-19 safety protocol. Patrons will be required to show proof of vaccination at check in and must remain masked in the theater.