When it comes to fatal diagnoses, few are as dreaded as ALS. Also known as Lou Gehrig’s disease, amyotrophic lateral sclerosis is a disease of the nervous system that leads to gradual paralysis and eventual death. While the sufferer loses the use of their muscles, their brain remains maliciously alert and intact, wholly able to process the atrophy that gradually and methodically consumes their body.

This was the fate of Morrie Schwartz, the eponymous Morrie of Mitch Albom’s blockbuster memoir Tuesdays with Morrie, the stage version of which is now playing at Theater J. Four years ago, it was also the fate of a beloved member of the Washington, DC, theater community: my friend and the founder of the publication I am now writing for, Joel Markowitz. Joel was the lens through which I watched Director Jenna Place’s tender exploration of mortality and friendship, not just because his death was similar to Morrie’s, but because his life was too.

Tuesdays with Morrie is a reminder that terrible things sometimes happen to the very best people. But it is also an uplifting declaration that while we all must die, some of us — the Morries and Joels of the world — live with such vibrancy that after we are gone, the best part of us stays alive in everyone and everything we have touched.

Tuesdays with Morrie has been wildly popular since it was first published in 1997 precisely because of this uplifting message. Theater J’s production successfully taps into both the joy and pathos contained in the story. Adapted into script form by Mitch Albom with assistance from Jeffrey Hatcher, the play is a quiet two-hander, narrated by Cody Nickell playing Mitch Albom himself, as he recounts his days as a self-absorbed college student who took every sociology class that Professor Morrie Schwartz taught, while also rebuffing Schwartz’s offers of friendship and failing to maintain contact once he leaves college.

They meet again sixteen years later when Albom, now a successful (but still self-absorbed) sports journalist, visits his old professor after learning that he is ill. Morrie — once a teacher always a teacher — resumes his role as sage advisor. Through a series of weekly meetings, Mitch and Morrie, a generation apart chronologically and worlds apart ideologically, confront the deepest truths about themselves, about life, and about death. Morrie has an uncanny ability to see the truth where Mitch desperately tries to hide it, and his gentle reminders that “dying is only one thing to be sad over. Living unhappily is something else” hit home with the audience and with Mitch equally. Really: get your tissues ready.

Michael Russotto plays a youthful Morrie, who at age 78 and facing a fatal disease, still loves to dance and dispenses hugs like candy. Russotto is quickly becoming one of my favorite DC performers for the warmth he brings to every character he inhabits. As Morrie, Russotto is the personification of childlike wisdom, with a fondness for dad jokes that frequently contain deep wisdom just below the surface. Morrie’s delightful sense of humor keeps Tuesdays with Morrie upbeat, in spite of the subject matter. Russotto delivers joke after delightful joke, finding ways to laugh about his situation. After attending a friend’s funeral, he decides that funerals are wasted on the dead and that he is going to throw his own funeral while he is still alive. “I kept thinking that Morrie would have liked this,” he tells Mitch about the event. “And I did!”

Playing Morrie requires Russotto to evolve from a “young” college professor in his 60s to a 78-year-old whose disease gradually limits his mobility. Russotto conveys the frustration that comes as indignities pile up: his hand shakes so badly that he can no longer eat in front of people. Reaching for a phone causes him to fold over in his chair where he remains, body contorted, hands clawlike until someone finds him. (The only way that this production failed to accurately portray the debilitating effects of ALS is that advanced ALS renders its victim completely unable to talk. But for obvious reasons that would have been hard to pull off in a stage play with only two actors.)

Cody Nickell played Mitch Albom with an egocentric brashness that I found hard to reconcile with the image I had formed in my head of Mitch Albom the writer. Was this self-absorbed narcissist who bragged about how much money he made as a sports writer really the same person whose nuanced explorations of life and death have captivated the world? I couldn’t tell if the brashness of the character was written into the script, coaxed out by the director, or played intentionally by the actor, but it left me asking myself why Morrie was so invested in this particular student. Nickell does a fine job in the role, though, and the chemistry between the two actors is palpable.

Andrew R. Cissna’s lighting adds texture to the show during scene changes that could otherwise have felt static. Scenic Designer Debra Kim Sivigny riffs on the Japanese Maple that Morrie can see outside his window. A large stenciled tree appears to the rear of the stage, and autumn leaves that descend from the sky hint at the cyclical nature of life and seasons. Ivania Stack’s costumes are period-appropriate. (Although it is strange that Mitch appears in a new outfit each time he visits while Morrie apparently never changes his clothes.) Matthew M. Nielsen’s sound design adds warmth to the show in the form of opera recordings that play on Morrie’s old record player.

Tuesdays with Morrie is a welcome addition to stories of people whose lives continue to inspire long past their death — and who inspire us the living in how to live life fully. 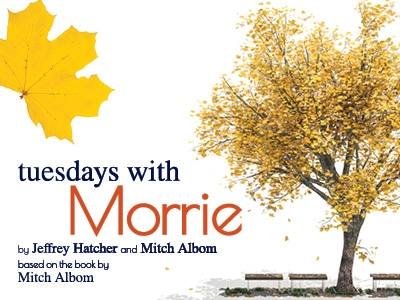 Tuesdays with Morrie plays through December 5, 2021, at Theater J, in the Aaron and Cecile Goldman Theater, located inside the Edlavitch DC Jewish Community Center at 1529 16th St. NW, Washington, DC. Patrons will be able to buy tickets to see the play in person or stream the production from home. For in-person tickets, call the box office at (202) 777-3210, or purchase them online. (The box office is available from 1 pm to 5 pm Monday through Friday and one hour before a performance.) Single ticket prices range from $35–$75. Tuesdays with Morrie will also be available on-demand from November 22 to December 5; streaming tickets ($40–$60) are available here.

The digital program is available here.

COVID Safety: In accordance with the Edlavitch DCJCC policy, all individuals will be required to show proof of full vaccination each time they enter the EDCJCC by presenting either digital documentation on a smartphone or a physical copy of their vaccination card. Individuals with medical or religious exemptions to vaccinations will be required to show proof of a negative COVID-19 PCR test taken within 72 hours of their arrival to the EDCJCC. For more information, visit theaterj.org/safetyguidelines.