Encore Stage & Studio presents Todd Wallinger’s Enchanted Bookshop Christmas, a festive prequel to his wildly popular children’s play The Enchanted Bookshop. Director Susan A. Keady (assisted by Morgan Cobb) wrangles a large cast and crew made up primarily of children. It’s an ambitious undertaking but one that is worthwhile and fun, resulting in a production that more than earns Encore’s longstanding slogan, “Theatre by kids, for kids!”

Technical Director Kristen Jepperson transforms the stage into the cozy interior of the bookshop “A Likely Story,” decked for the season with a sparkly tree and twinkle lights. Lighting Director Gary Hauptman uses soft lighting to make the environment warm and welcoming, highlighting life-size displays such as Cinderella and the Nutcracker (though one of these is more than just a decoration!).

The production element that stands out the most has to be the costumes by Debra Leonard. With so many classic (but very different) characters on stage at once (think Dorothy, the Velveteen Rabbit, Pollyanna, and Tom Sawyer, to name a few), they almost look like they’re celebrating Halloween onstage instead of Christmas!

Bookshop owner Margie (Sydney Payne) welcomes her sister Ellen (Reagen Holland) and her young daughter Annabelle (Juli Walitt) to come and stay with her for Christmas. Little does everyone know, when nighttime falls the storybook characters escape their bindings and come to life! We find out that Ellen has fallen on hard times after having been laid off from her job, but fortune strikes when billionaire Philip Brantley (Jagger Grove) wanders in with the offer of a lifetime. However, plot twists intervene and threaten to ruin everything, unless the storybook characters can work together to pull off a Christmas miracle!

The plot has a lot of fun moments, and the kids all do very well with the material. Though perfect performances can’t be expected with such a young cast, for the most part, they are solid and steady. I especially liked a moment when Margie is annoyed to find that someone has dog-eared a copy of her book, only later to see that the Nutcracker (a lively performance by Drew Wright) panics when he realizes that he has grown actual dog ears! Befitting the season, most of the characters are from holiday classics; I especially enjoyed Henry Phoel and Gabby Wilson as Jim and Della Young from The Gift of the Magi, whose classic story unfolds onstage after getting a modern upgrade.

Ryan Hutt delivers one of the evening’s most eager performances as Ebenezer Scrooge, with elaborate and enthusiastic body language that captures and holds your attention whenever he’s onstage. Catalina Coronado is great as Amy March, and Abigail Houle gets a lot of laughs as Cinderella, who begins each night by frantically searching for her lost slipper. Zora Howard easily has the most stage time as Bombalurina, the bookshop cat. Though she doesn’t have any actual lines, her interactions with the other characters are amusing (does hissing count as a line? If so then I’m mistaken…she has many lines!).

Encore Stage & Studio’s Enchanted Bookshop Christmas was a lot of fun! Highly enjoyable and full of spirit, the show would be a great way for your family to kick off the holiday season.

Running Time: About 90 minutes, including one 15-minute intermission. 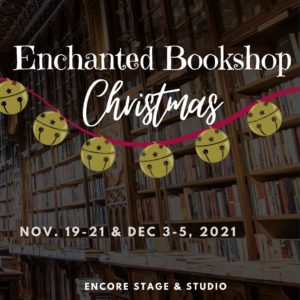 COVID Safety: Encore Stage & Studio follows all Arlington County and Arlington Public Schools COVID-19 procedures. Masks are required for all audience members except for children under the age of 2. Encore staff and students are also required to wear masks at the theater.