Though trusted with maintaining Lovewit’s London house while the wealthy gentleman has fled to the country to escape the plague that’s ravaging the city, Face, his scheming butler, has instead welcomed in his fellow con artists Subtle (in the fraudulent guise of the title) and the smart and seductive Dol. Their nefarious plan is to bilk a roster of credulous characters with the wily trio’s claims of the power of prognostication, the ability to transmute base metal into gold, and the promise of securing them love connections. Of course, the only magic they’re performing is making the money and valuables of their unsuspecting but equally covetous victims disappear into their own shared coffer – a locked chest that requires three keys to open, one held by each, since the artful crooks can’t even trust one another.

The fast-paced side-splitting morality tale takes us through an array of shifting identities, disguises, and deceptions, bawdy humor, pandemic and theater jokes, duels, deals, and broken alliances that become increasingly frenetic with the imminent return of Lovewit and the exposure of the cohorts’ deceitfulness – much to the anger and shock of everyone who’s been duped.  And though Hatcher’s revised script has fewer characters and takes places in a single locale, it remains rich, complex, and loaded with the parodic wit of the 17th-century original, while also acknowledging similar concerns in our current times and endowing the only two women in the story with greater power and intelligence than they were initially given.

A high-spirited cast led by the outstanding Reg Rogers as Subtle the alchemist, Manoel Felciano as Face the butler, and Jennifer Sánchez as their partner Dol flawlessly keep up the cunning hijinks with rapid-fire energy, quick changes, and riotous characterizations. All three put their finest comedic chops on full display, with Sánchez also contributing her musical talents while hitting operatic high notes, strumming the lute, and performing an enticing rendition of the risibly anachronistic but thoroughly apropos theme song from the 1964 James Bond film “Goldfinger” (one of Hatcher’s clever addenda to Jonson’s classic).

The lead trio is supported by the equally masterful featured cast of Nathan Christopher, Stephen DeRosa, Carson Elrod, Teresa Avia Lim, Jacob Ming-Trent, Louis Mustillo, and Allen Tedder as their gulls (or presumed to be, until they’re not), assuming a variety of socio-economic classes and accents from Britain to Spain to Brooklyn, NY (dialect and voice coaching by Deborah Hecht), revealing the avaricious motivations of their characters, and embracing the farcical roles and plot points with full-out gusto. Each and every one is a total delight.

In contrast to the old adage that there’s “honor among thieves,” The Alchemist proves that there is none, but there are valuable lessons to be learned from their mistakes in this insightful laugh-out-loud comedy. It’s all a whole lot of meaningful fun that still resonates today.

Running Time: One hour and 55 minutes, including an intermission. 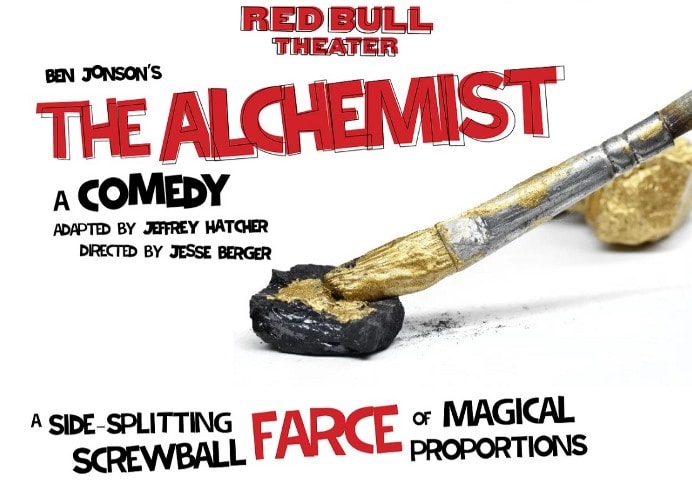 The Alchemist plays through Sunday, December 19, 2021, at Red Bull Theater, performing at New World Stages, Stage 5, 340 West 50th Street, NYC. For tickets (starting at $70), call (212) 239-6200, or go online. Proof of vaccination and a photo ID will be required of all audience members before entering the building and everyone must remain masked, except when actively eating or drinking.​