In How I Learned What I Learned, Wilson takes us on a journey through his days as a young poet: his first few jobs, a stint in jail, the support of his lifelong friends, and his encounters with racism, music, and love as a struggling writer in Pittsburgh’s Hill District. Originally performed by Wilson himself, the play is a heartfelt theatrical memoir—charting one man’s journey of self-discovery through adversity, and what it means to be a Black artist in America.

Director DeMone Seraphin states that “Avant Bard is proud to present the life of this prolific writer as our re-entrance into in-person performances!” Avant Bard invites audiences to enter the world of August Wilson and walk through the memories and stories that fueled the genius of one of America’s greatest storytellers and gave us the brilliance of what we know as the Century Cycle Plays.

William T Newman Jr.’s stage credits include the title roles in Sophocles’ OEDIPUS THE KING and Shakespeare’s OTHELLO with Lean & Hungry Theatre. Other roles include Jack Johnson in the Ohio Valley Summer Theatre production of THE GREAT WHITE HOPE. In Washington, he has made appearances at Arena Stage in JULIUS CAESAR and THE WINTER’S TALE. Credits also include starring roles in PLAZA SUITE, CEREMONIES IN DARK, OLD MEN, and LET’S GET SANCTIFIED. On network TV he played the role of Hal Johnson on the daytime serial Somerset, and his motion picture credits include Suspect and Lee Daniels’s The Butler.

In addition to his acting credits, William T. Newman Jr. is Founder and President Emeritus of the Arlington Community Foundation. He has served as a judge on the Arlington Circuit Court of the 17th Judicial Circuit of Virginia since 1993 and as its Chief Judge since 2003. In 1987, he became the first African American elected to the Arlington County Board and served as its chairman in 1991.

Director DeMone Seraphin is a Helen Hayes Award nominee for his direction of TOPDOG UNDERDOG. Other directing credits include the Off-Broadway revivals of SPLIT SECOND and THE EXONERATED, the world premiere musical “ONCE UPONZI TIME: A Tale of An American Scheme” at the McCarter Theatre, Off-Broadway premieres of “YOURS TRULY, ELLA! A Celebration of The Ella Fitzgerald Songbook,” the German premiere of August Wilson’s JITNEY and the musical RUNAWAYS. As an actor DeMone has appeared on Broadway, nationally, and internationally in MISS SAIGON, RENT, RAGTIME, J.C. SUPERSTAR, AIN’T MISBEHAVIN, and MAN OF LA MANCHA. In addition to being a Producing Partner for Avant Bard Theatre, DeMone is the Founding Artistic Director of The New American Theatre Co., New York. 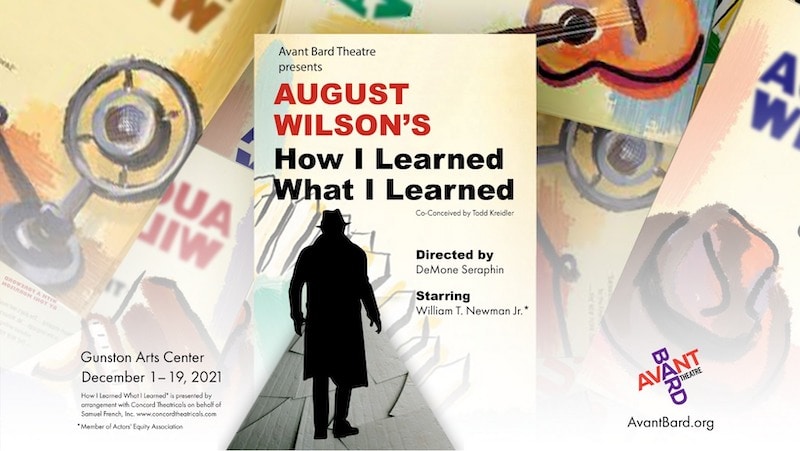 How I Learned What I Learned runs December 1 through 19, 2021, presented by Avant Bard Theatre performing at Gunston Arts Center, Theatre Two, 2700 S Lang Street, Arlington, VA. There is ample free parking and the venue is accessible via public transportation. For schedule details, visit avantbard.org. Tickets are $40 and are available at avantbard.org or by calling 703-418-4808. Advance-Purchase Pay-What-You-Will tickets are also available online for previews and will be on sale online for all other performances beginning the Sunday before each show.

COVID Safety: Either proof of vaccination or a negative COVID test is mandatory for entry and face coverings must be worn at all times while in the building. Avant Bard follows the VDH/CDC recommendations for preserving public health.