As holiday fare goes, Ken Levine’s 2019 comedy On the Farce Day of Christmas has the virtue of not being one of the joyful season’s endlessly flogged warhorses, of the It’s a Wonderful Life ilk. The show at Gaithersburg’s Best Medicine Rep has scattered clever, quite funny, lines, as when the male lead, Gary (Evan Crump) describes his father-in-law, Frank (Mickey Trimarchi), as “Bill Belichick but without the whimsy.” That about exhausts the merits of the piece.

The engine of the plot is that staple of screwball comedy, the recently divorced couple whose constant bickering means that they are still in love and will inevitably reunite (see for example The Philadelphia Story). Another well-worn comic trope is people pretending to have a conventional relationship to avoid problems with conventional family members. Spoiler alert: it never works (see for example La Cage Aux Folles). Here, Gary’s ex-wife Wendy (Kathleen Barth) bribes him to attend her parents’ Christmas celebration posing as her current rather than ex-husband, since her mom (Jean Rosolino) has adamant religious objections to divorce.

Levine’s characters never aspire to more than sitcom-level depth, and, in traditional sitcom fashion, the lead couple must deal with Wendy’s very weird parents. The grumpy, sometimes aggressive, sometimes leering Frank has sequestered himself in his room for five months, watching Jeopardy and dreaming of brine shrimp. His wife — who has been miserable for at least 15 of her 30 years married to Frank — cheerfully brings his meals to his room and urges childbearing on Wendy and Gary with the aid of a large illustrated edition of the Kama Sutra.

Two supporting characters round out the cast. Chip (Rocky Nunzio) is Wendy’s overly solicitous and obviously unsuitable boyfriend. Karen (Abigail Weinel) is Wendy’s irresistible-to-men best friend since high school, on Christmas break from her gig as an aid worker in Africa. (The script unfortunately includes a few cringeworthy attempts at Africa jokes, like Karen’s reference to having become proficient with an elephant gun.)

Levine occasionally insists on having characters address the audience directly to fill in exposition or to explain what’s really happening, as if he had not received the “show, don’t tell” memo.

It should be emphasized that the problems with the production lie with the script, not the performers. The cast, under the steady direction of Best Medicine Rep regular Stan Levin, maintains a strong pace and makes valiant efforts to keep the play afloat. Barth brings high energy to her portrayal of a character who, contrary to the playwright’s description as being “always composed,” is as neurotic as a squirrel. Trimarchi’s and Rosolino’s evocations of her parents’ dysfunction make Wendy’s issues understandable. Crump goes over the top, generally effectively, with the much put-upon Gary’s back pain and psychedelic hallucinations.

Best Medicine Rep has a new, intimate space in the mostly disused Lakeforest Mall, which Levin and artistic director John Morogiello fill credibly with the rather tired furniture and standard Christmas decorations that Wendy’s parents would have in their house. Their sound design features traditional Christmas music played from time to time. Unfortunately, the theater is not protected from background music echoing in the vacant vastness of the mall, which at times became obtrusive.

It’s a good thing to attempt a humorous Christmas-themed show that does not present as a staged Hallmark card. This attempt, despite Best Medicine Rep’s best efforts and some amusing moments, is thwarted by the material’s evident weaknesses. 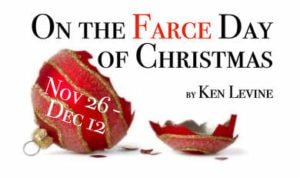 On the Farce Day of Christmas plays through December 12, 2021, presented by Best Medicine Rep performing at Lakeforest Mall, 701 Russell Avenue, Gaithersburg, MD. Performances are every Friday and Saturday at 7 pm, and every Saturday and Sunday at 2:30 pm. Parking is at the Yellow Sun entrance to the mall. Tickets are available exclusively online and must be purchased in advance ($25 general admission, $23 seniors, $20 groups of 10+).

COVID Safety: All patrons must be masked and show either proof of fully vaccinated status or a negative COVID test result within 48 hours of a performance. The complete policy for the production may be found on the Best Medicine Rep home page.