Following a dazzling debut at Feinstein’s/54 Below in August, The Boy Band Project returned to a packed house at the famed nightclub for one night only on December 6, with a new incarnation of their annual feel-good wintertime show The Boy Band Project: Holiday Edition. And not only did it have, as playfully promised, “all the feelings” of the romantic chart-toppers by the heart-throb guy groups from the ‘90s to the present, it had it all – the soaring vocals, tight harmonies, sexy moves, intimate repartee, drop-dead gorgeous looks, and tongue-in-cheek humor that has made them one of the hottest acts on the club circuit in the US and beyond.

The cast (which rotates from show to show depending on their schedules) consisted of founder and producer Travis Nesbitt, Jesse JP Johnson, Christopher Brasfield, and Sam Harvey – all NYC musical-theater stars in their own right outside of The BBP. Together and individually they heated up the room with a tantalizing set list of songs and medleys and appropriately seductive choreography that included such quintessential boy band, BBP, and fan favorites as “Tearin’ Up My Heart” by *NSYNC, “I Want It That Way” and “Everybody” by Backstreet Boys, “You Got It (The Right Stuff)” by New Kids on the Block, One Dimension’s “What Makes You Beautiful” and “Story of My Life,” along with the two 1966 Beach Boys hits “God Only Knows” and “Wouldn’t It Be Nice.”

To celebrate the season, the Boys (in winter-white costumes that, on their fit and muscular bodies, were somehow more suggestive of hot steam than cold snow), performed a selection of popular holiday numbers, from *NSYNC’s “Merry Christmas, Happy Holidays” and New Kids on the Block’s “Funky Funky Christmas” to “All I Want for Christmas” by Mariah Carey, “Last Christmas” by George Michael, and the heartwarming American classic “The Christmas Song,” written by Mel Tormé and popularized by Nat King Cole. And, of course, no BBP holiday show would be complete without their own suggestive video single “Jingle My Bells,” written for them by Michael Mott, which perfectly embraces the musical style, love-struck emotions, parodic wit, and alluring tone and demeanor of their irresistible homage to the original boy bands.

Whether working up a sweat in the high-energy numbers, sitting down for the heartfelt ballads, or pumping it up again with their vigorous physicality, it ain’t no lie – I’m a sucker for them. All I want for Christmas is The Boy Band Project: Holiday Edition for una noche each and every year – and lots more of their fabulously entertaining shows in between. 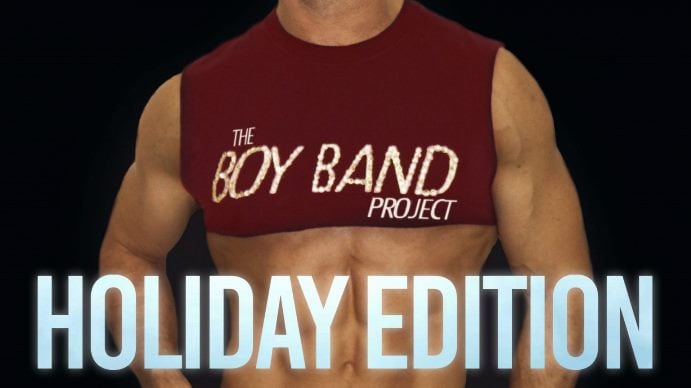 The Boy Band Project: Holiday Edition played on Monday, December 6, 2021, at Feinstein’s/54 Below, 254 West 54th Street, NYC. For future performances by the group, visit The BBP website; for the calendar of upcoming shows at the club, go online.