The new big-budget musical-theater production of the popular 1993 award-winning movie starring Robin Williams, Mrs. Doubtfire is the latest in a long list of screen-to-stage adaptations that bank on the familiarity of a film to bring its fans to Broadway. With its huge cast and zany production numbers, elaborate scenic design and costumes, and over-the-top physical humor, it undoubtedly will attract an audience base that can relish the preposterous, embrace the laughs, and disregard the work’s offensive gender-related stereotypes. Tootsie, which played on Broadway in 2019, elicited similar criticism and protests of its perceived transphobia and misogyny, but garnered eleven Tony nominations and took home two, for best book of a musical and best actor.

As with the original movie, the premise of the show, with a book by Karey Kirkpatrick and John O’Farrell, and music and lyrics by Wayne Kirkpatrick and Karey Kirkpatrick (creators of the extremely witty ten-time Tony-nominated Something Rotten!), requires a total suspension of disbelief. The wild comedy revolves around the lengths to which Daniel Hillard – an immature irresponsible husband, father, and out-of-work actor who specializes in voice-overs – will go to maintain close contact with his kids after losing custody in a contentious divorce.

When his ex-wife Miranda searches for a nanny to care for their three children while she’s at work, he disables responses to her help-wanted ad and enlists the aid of his gay brother and his partner, costume and make-up artists at a present-day San Francisco TV station, to make him into a woman so he can get the job. He assumes the guise of a Scottish nanny he spontaneously names Mrs. Doubtfire, is hired by Miranda, and neither she nor their son or daughters recognize him. But they bond with his alter-ego, and, after his true identity is accidentally revealed, they all grow, learn the importance of familial love, agree to shared custody, and are just fine with his duplicitous actions, controlling machinations, and outrageous lies to get what he wants. Okay.

The show, which began Broadway previews on March 9, 2020, and was originally slated to open that year on April 5, was reworked and ‘updated’ during the pandemic shutdown, but, for me, it’s still missing the up, which just makes it dated. Aside from the central characterization of a talented performing artist as childish and frivolous, there are also some serious issues with the clichéd portrayal of gender identities, laughing at cross-dressing and those who don’t fit the straight cis-gender norm, and defining accomplished professional women (the thankless roles of his wife, his court-appointed overseer, his new boss, and the real-life inspirations for the dowdy look of Mrs. Doubtfire) as mean, controlling, unattractive, and humorless. Funny.

And at the risk of being categorized as yet another mean and humorless professional woman, it’s also impossible to believe that Miranda wouldn’t have an even bigger issue with him as a role model for their kids than she did before, proving to them that it’s okay to do whatever it takes to get what you want in the name of love (including attempting to destroy her budding relationship with the very nice, and very fit, Stuart Dunmire). Really?

With that said, and that’s quite a mouthful, the cast, directed with rapid-fire energy by four-time Tony winner Jerry Zaks (Hello, Dolly!), does its best with the absurd plot points and characters, led by Tony nominee Rob McClure (Chaplin) as the hyperactive man-child turned titular nanny. He never misses a beat in his quick-change transitions from Daniel to Doubtfire, spot-on array of assumed character voices, lightning-fast one-liners, and masterful physical comedy. He also sings everything from hard rock to heartfelt ballads to supposedly improvised rap in the eclectic, but not particularly memorable, score, including surreal production numbers in which legions of imagined characters and people from his laptop screen come to life and dance (choreography by Lorin Latarro; music supervision, arrangements, and orchestrations by Ethan Popp).

Among the other standouts in the large supporting cast and ensemble (aside from the four understudies at the performance I attended) are J. Harrison Ghee as the outspoken and take-charge make-up artist Andre Mayem, Peter Bartlett as the aging and out-of-touch TV children’s show host Mr. Jolly, and Analise Scarpaci as the Hillards’ adolescent daughter Lydia, who steals every scene she’s in with her killer vocals and convincing range of emotions towards her dad.

A top-notch artistic design is indispensable to the show, and it has one. The set by David Korins easily shifts to the identifiable changing locations of the story, and lighting by Philip S. Rosenberg and sound by Brian Ronan enhance both the realism and the fantasy of the different scenes. And central to the thematic concept are the character-defining costumes by Catherine Zuber, hair and wigs by David Brian Brown, and make-up and transformative prosthetics by Tommy Kurzman, which are handled with skill by McClure.

If you can forget about all the illogic and overlook the gender-identity faux pas of the plot in our current times, and just want a ridiculous escapist musical reincarnation of the movie, the cast and design of Mrs. Doubtfire could have you laughing and entertained. 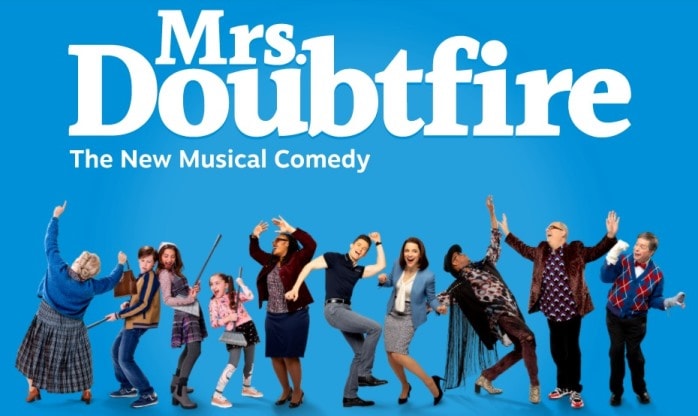 Mrs. Doubtfire plays through Sunday, May 29, 2022, at the Stephen Sondheim Theatre, 124 West 43rd Street, NYC. For tickets (priced at $49-249), call (212) 239-6200, or go online. All audience members must wear a properly fitting mask over the nose and mouth while inside the theater, except when eating or drinking in designated areas. Everyone ages 12 and older must be vaccinated with an FDA or WHO authorized vaccine.