This year marks the centennial anniversary of NYC’s The Town Hall, centrally located on West 43rd Street in the heart of the Times Square district. Originally conceived as a meeting place for Suffragists to educate people on the importance of the 19th Amendment, which was passed during the building’s construction, the space was completed and opened on January 12, 1921.

That same year, German composer Richard Strauss, in his US debut, performed a series of concerts there, and it soon became an important home for musical performances, hosting such significant milestones as the American premiere of Isaac Stern, Marian Anderson’s first New York recital, the introduction of bebop to the world by Dizzy Gillespie and Charlie Parker in 1945, and Bob Dylan’s first major concert in 1963, among many other notable events.

According to Artistic Director Melay Araya, “We continue to be inspired by unique voices and the exceptional talent that have become synonymous with The Town Hall. As we continue to welcome audiences back to The Town Hall for in-person shows, we know this year’s holiday season will be the best one yet.” 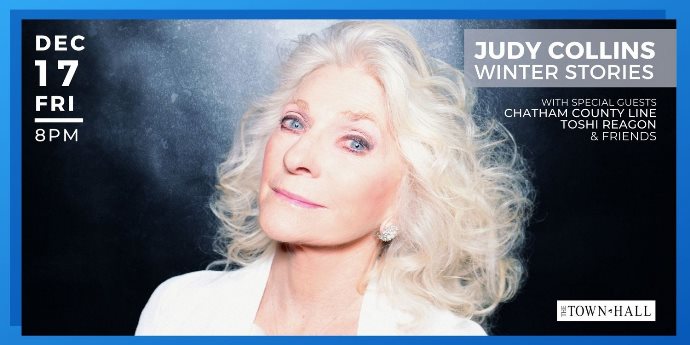 Judy Collins: Winter Stories – The award-winning singer-songwriter, esteemed for her interpretations of traditional and contemporary folk standards, her own original compositions, her commitment to social activism, and her 55-album body of work since the 1960s, will take the stage on Friday, December 17, at 8 pm, for one night only. In a reunion with the North Carolina-based bluegrass group Chatham County Line, Collins and the band will perform songs from their 2019 Winter Stories collection, including classics like Joni Mitchell’s “The River” and other favorites. The show will also feature storytelling and holiday music, along with special guest Toshi Reagen, whose work spans the genres of folk, blues, gospel, rock, and funk. 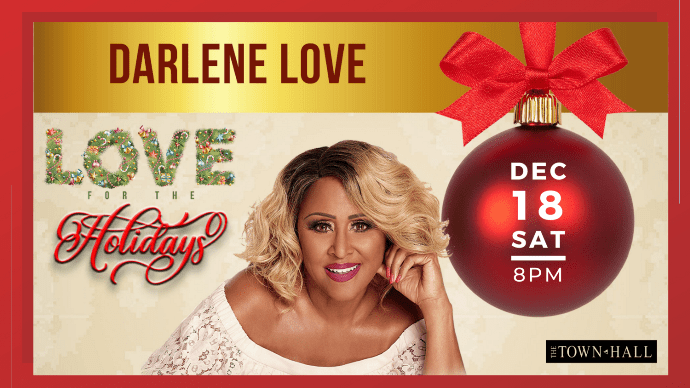 Darlene Love: Love for the Holidays – Beginning in the early Sixties, as part of Phil Spector’s “Wall of Sound” hit factory, rock-and-roll icon Darlene Love has brought her powerful voice, infectious cheer, and captivating presence to New York with a series of concerts each holiday season and an annual appearance for 28 years on The Late Show with David Letterman to perform her #1 holiday classic “Christmas Baby Please Come Home” with Paul Shaffer and the CBS Symphony Orchestra. This year, for the first time ever, Love is taking to The Town Hall stage for her one-and-only NYC holiday show on Saturday, December 18, beginning at 8 pm. A 2011 inductee in the Rock and Roll Hall of Fame (her industry’s highest honor), Love is known for her Billboard chart-toppers, including “He’s A Rebel,” “The Boy I’m Gonna Marry,” and “He’s Sure the Boy I Love,” and has also performed in such Broadway musical favorites as Hairspray, Grease, and Leader of the Pack. 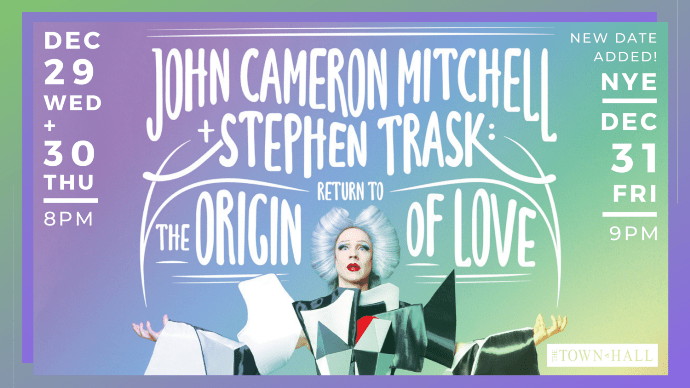 Return to the Origin of Love: The Songs and Stories of Hedwig – Following a premiere sold-out three-night engagement in honor of PRIDE50 and capacity crowds across the US, Australia, Japan, and Korea, multi-award-winning Hedwig and the Angry Inch co-creators John Cameron Mitchell (writer, director, and lead actor) and Stephen Trask (composer and lyricist) are back at The Town Hall with their “love letter to Hedwig fans everywhere.” Playing December 29-31, at 8 pm, Mitchell, Trask, and co-star Amber Martin – a celebrated NYC vocalist, cabaret star, and comic – celebrate the end of 2021, and the start of the New Year, with a collection of songs and stories from Hedwig, and antics and debauchery from the past two decades. VIP tickets, available December 30-31, come with a gift bag of unique autographed items, and all proceeds from their sales will go to organizations working across the LGBTQIA community, including The Chosen Family Law Center and Burritos Not Bombs.

The Town Hall is located at 123 West 43rd Street, NYC. For the holiday concert schedule, more information about the shows, and tickets, go online. Based on current CDC and state guidelines, protocols include mask enforcement, proof of COVID-19 vaccination or negative test verification, and photo ID. Ticket holders who do not comply with venue policies will not be admitted.