True confession time: Until this weekend, I had never seen a British panto. Of course, I was familiar with the theater form. Pantos (short for pantomimes) are theatrical events that pair popular stories with jokes, song and dance, exaggerated characters, and lots of audience participation. Pantos are a big deal during the holiday season in Britain but are less well known in the U.S., which is a shame because pantos are a fun, loud, and raucous way to experience theater. In other words: a great option for families looking for fun this holiday season.

The British Players’ production of The Wizard of Oz: A British Pantomime is no exception. People of all ages packed the auditorium the day I was there. Early in the show’s opening number, we were told that audience participation wasn’t suggested, it was delightfully mandatory. Throughout the show, characters encouraged the audience to yell out, boo, or cheer for them. And cheer they did.

Written by Emma Houldershaw and Samantha Cartwright, this is not the musical version of The Wizard of Oz that you have likely seen on stage or screen. Yes, it has songs, and yes, your favorite characters are there — including Dorothy and Toto, the Lion, the Tin Man, and the Scarecrow — but they are joined by an array of additional characters who amp up the humor of the show. There is Harry Trotter, a kind farmer who is sweet on Dorothy. As he makes his way through Oz, everyone he meets confuses him with Harry Potter, a gag that gets progressively funnier the more times it happens (the confusion is compounded by the fact that he is dressed like Harry Potter — if Harry Potter lived on a Kansas farm). Mark Crimans plays Trotter with delightful comedy and strong vocals.

Then there are Salt and Pepper: a hip-hop duo who join Trotter in searching for Dorothy once she is lost in Oz. The duo’s rap to the iconic “Push It” — renamed “Pop It” with new lyrics specific to the show — is a high point in the production’s hilarity. Clare Palace as Salt and Sarah Leembruggen as Pepper are like a hip-hop, Cockney-accented Abbott and Costello. Their big number induces many justly earned guffaws.

Many of the songs, in fact, are classics with lyrics modified to fit the Wizard of Oz story. (Additional lyrics by Chuck Hoag, Neil McElroy, and Missi Tessier.) Don’t worry: Dorothy (delightful soprano Allison Meyer) still sings “Over the Rainbow,” but most of the other songs are classics from a variety of eras past and present: “I’ve Had the Time of My Life” from Dirty Dancing is notched in there, as well as “Whatever Lola Wants” from the 1950s musical Damn Yankees. This version of the classic tune, however, is restyled as “Whatever Witchy Wants” and is sung by the fierce Missi Tessier, whose cackling filled the auditorium every time her energetic presence hit the stage.

Another high point of the show — and another classic song — was Amanda Dullin-Jones as Dorothy’s dog, Toto. Throughout much of the first act, Dullin-Jones gave a spectacular wordless performance (she is a dog after all). Even without words, Dullin-Jones conveyed high-spirited humor that made it clear she belonged on that stage. But her big moment comes near the end of Act One when she breaks out into song (and encourages the audience to applaud her. She is now a talking dog, after all!) with the number “My Heart Belongs to Dottie.”

One element of British pantos is a cross-dressing cast member who acts as the “pantomime dame.” The tradition is carried out here with the Aunty Em character, played by Chuck Hoag. Hoag acts as a kind of stand-up comic, peppering the audience with groan-inducing puns like “all my cows blew away. It was an udder disaster!” (Hoag also served as the show’s music director).

Kudos are due to Director Nicola Hoag for this top-notch production. The costumes (designed by Justine Crimans) alone are worth the price of admission, from Salt and Pepper’s checkered pants to the Tin Man’s silvery ensemble. Also of note were Dorothy’s quick costume changes, including a dress that turns kaleidoscopic once she crosses the rainbow, and ruby slippers that suddenly appear on her feet without her leaving the stage.

A large cast of Munchkins completed the cast with lively dancing choreographed by Shannon Cron. Live music (led by Sue Mason McElroy) accompanied the performers, and a large screen projected images of tornados and Oz to amplify the experience. Murals depicting rainbows and poppies sat on either side of the screen, while Oz’s yellow brick road came in the form of steps leading down from the stage, allowing the actors to walk through the auditorium (set design by Nicola Hoag, Chuck Hoag, and Mike Lewis). Steve Deming’s lighting created an additional part of the yellow brick road, while Sarah Katz’s sound design ensured that everything was crystal clear. Makeup was by Cathy Dunn and stage management was by Matt Mills.

This production is a delightful antidote to more formal holiday events. If fun is on your agenda — or your kids can’t sit through the Nutcracker — The Wizard of Oz: A British Pantomime is just the ticket for holiday joy. 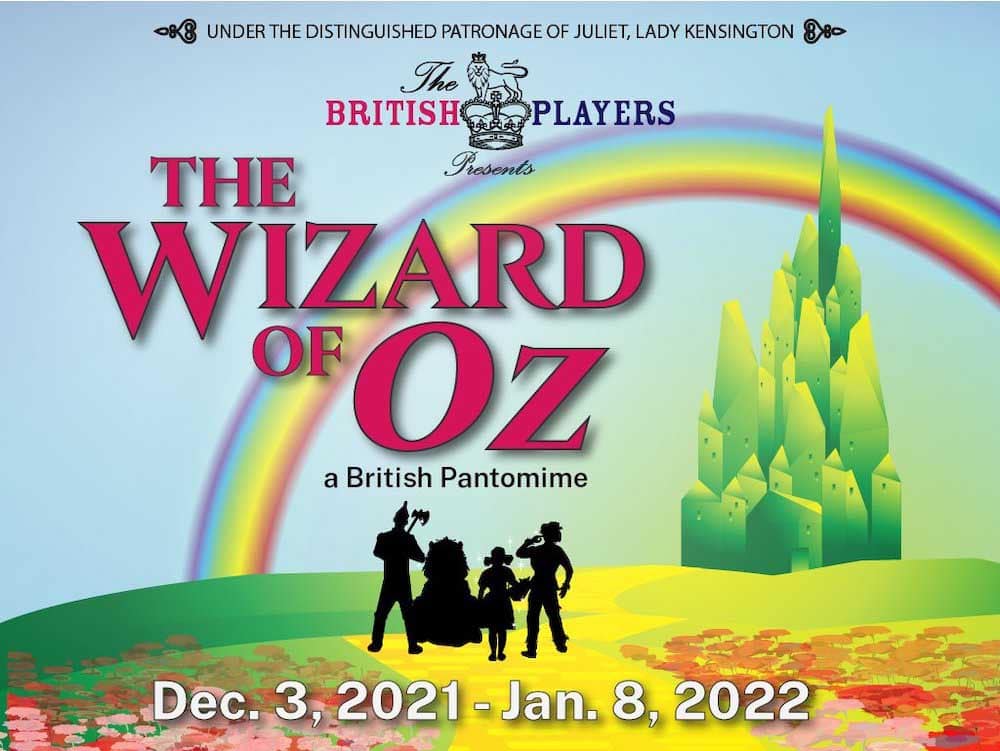 COVID Safety: Ticketholders agree to follow any and all COVID-19 mitigation protocols in place at the venue. These could include, but not be limited to, wearing an approved face-covering, providing proof of COVID-19 vaccination status, and maintaining CDC recommended social distancing. See more details about this policy here.