The Landless Theatre Company’s Artistic Direction team, Andrew and Melissa Baughman, have taken on a new project this season: they formed a comedy band called The Bingle Jells in the spirit of Weird Al and Dr. Demento, and dropped their first album, A Latchkey Kid’s Christmas Album, on iTunes, Spotify, and Amazon Music on December 14, 2021.

It’s 14 twisted tunes and it’s free for the listening. We sat down with the Baughmans to talk about this unusual project:

Where on earth did this idea come from?

As theaters and performance venues were starting to open up, we thought it would be neat to form a holiday parody-music group for performances this season. We reached out to a number of musician friends that we work with regularly. Most of them weren’t ready to get back into the performing saddle just yet, but Melissa had already written a lot of funny lyrics, so we decided to start off with an album. It was quite a project, but a bit more manageable than the All-Sock Puppet virtual production of Urinetown that we took on earlier this year (still available online through April 2022 — see the DCMTA review).

Tell us about A Latchkey Kid’s Christmas Album.

At the heart of the album is our original song “Latchkey Kid at Christmas,” which is also our single. It is a paean to our generation, Gen X, who have weathered this pandemic era in silence, drawing strength from our latchkey kid roots, and perhaps even enjoying the ongoing excuse to avoid social gatherings and to work from home. We are so often overlooked between the wailing of the Boomers and the gnashing of the Millennials, and we’ll soon be eclipsed altogether by the self-righteous indignation of our own Gen Z children. “Latchkey Kid at Christmas” is a song that is beautiful, sad, and funny. We actually liked it enough to expend a little more time and care into orchestrating and recording it than the rest of this album. It lays the foundation for an album that may be more evocative of Festivus than Christmas in its countless odes to mundanity. 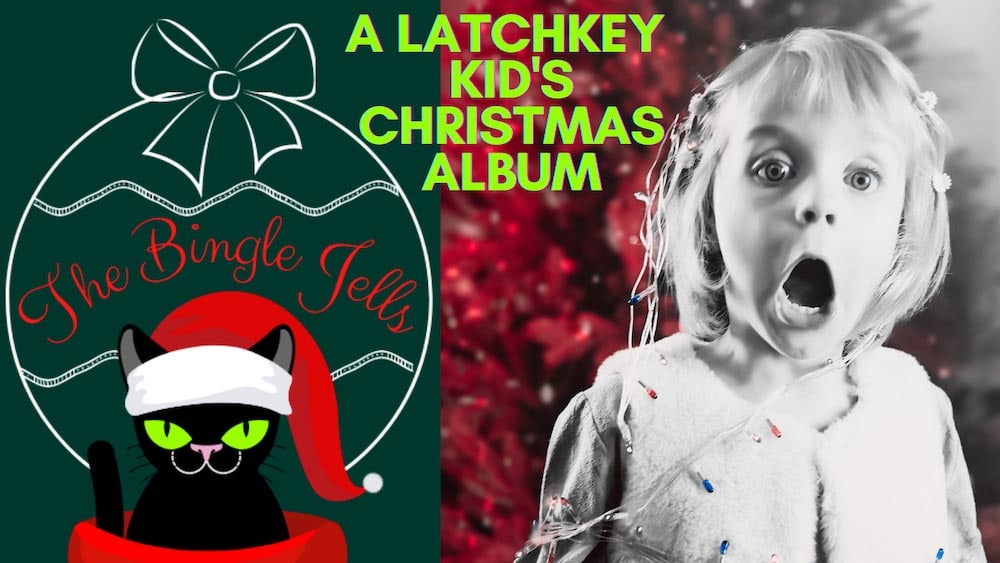 Our holiday parodies are the product of too many years spent consuming Weird Al and Dr. Demento. “True Crime TV” exploits our collective paranoia from being shut in with too much time for Netflix. “Joy to the World (the Food Has Come)” captures that rollercoaster of bliss and disappointment we experience in our turbulent relationships with GrubHub and DoorDash. Likewise, “Oh What a Night” extols the devastation of a holiday meal gone wrong. Can you tell we like to eat? “Away in a Trailer” is the political song we swore we wouldn’t write, but we did it anyway, so you can just suck it up and deal with it. “Oh Well” is a song that asks the question “Is ‘friending’ everyone you went to high school with on Facebook really worth the risk to your mental and physical well-being?”  “Whose Child Is This?” and “One You All Know” will both be very familiar to parents everywhere. “Why Is Grandma Always High?” is a song written especially for the kids of today.

Did you notice our cool explicit-content warning? Our two “Unnecessarily Censored” versions of Harry E. Humphrey’s classic holiday archival radio recordings actually have no explicit content other than whatever pops up in your own filthy minds. We just wanted to be edgy.

Our other original song is “HorrorHound Holiday,” a catchy little ditty we repurposed from a song we wrote years ago for Ningen Manga Productions’ web series Helena Hussy of Horror (originally titled Hussy Holiday), which is still lurking on the internets for your enjoyment. Fun fact: in spite of this being a Christmas album, “Horrorhound” is one of only two Christmas songs, and it is more an inclusive secular holiday song for “Christmas, Hanukkah, and Ramadan.” Wait, does that make this the first Ramadan song? And the second Hanukkah song?

Finally, since we want you to sing our songs, we have included bonus karaoke sing-along tracks for two songs with “hard to find accompaniments.”

Who is the ideal audience for The Bingle Jells and this album?

A Latchkey Kid’s Christmas Album is a perfect holiday gift for your mom, your grandma, your aunties, and little old ladies everywhere. Also, for weirdos in general.

The Bingle Jells’ debut LP A Latchkey Kid’s Christmas Album will be released on iTunes, Spotify, and Amazon Music on Tuesday, December 14, 2021. The song “Latchkey Kid at Christmas” will also be released as a single.