The Washington Revels have once again returned to the live stage with their ever-popular The Christmas Revels—this year subtitled An American Celebration of the Winter Solstice. A joint effort between Co-Stage Directors Roberta Gasbarre and Andrea Jones Blackford and Music Director Elizabeth Anne Fulford, this production brings audiences a revue of favorite Christmas songs, folk music, and Revels classics. Set in post–Civil War DC, the plot finds the revelers in the stately parlor of the aptly named first Black Senator appointed to the U.S. Congress, Hiram Rhodes Revels (Gregory McGruder). Along with his friend Senator Charles Sumner (Greg Lewis) and his wife Phoebe (Andrea Jones Blackford), Senator Hiram Rhodes Revels welcomes a variety of performers to entertain the audience.

This particular Christmas Revels deals with some heavy topics, such as the lives of recently enslaved African Americans. Harriet Tubman (Jacqueline Berry) features prominently throughout the production. I enjoyed the addition of the songs from the Gullah culture, such as “Ha’k’ ‘E Angels,” but I believe there is still room for growth in respectfully portraying the lives of enslaved and formerly enslaved peoples in all forms of media—this one was a bit hit-and-miss for me. Admittedly, I think it would have been strange to ignore the issue of slavery, since the setting was so close to the end of the Civil War. The “storyline” of the Revels tends to function only as a loose framework to deliver the performances. This production certainly doesn’t fail in that area—it’s clear that everyone in this year’s Revels was passionate about the music.

Gregory McGruder as Hiram Rhodes Revels warms up the audience with the participatory “How Do You Do, Everybody?” This is another one of the songs from the Gullah people of the Georgia Sea Islands. Part One is peppered with Christmas classics such as “It Came Upon the Midnight Clear” and “I Heard the Bells on Christmas Day,” which allow the full cast of singers, along with the Washington Revels Brass Quartet, to show off their talents. “Jehovah, Hallelujah,” a song pulled from an early collection of songs by enslaved people, was a particular highlight. The Washington Revels Jubilee Voices lead many of the traditional Black folk songs, which are a very welcome addition and appropriate for the story being told. As always, the first part of the show ended with the rousing “Lord of the Dance,” where singers lead the audience out of the venue for intermission.

Despite a change of venue to the Spanish Ballroom at Glen Echo Park and the COVID precautions, all of the familiar elements are present in this year’s Revels. Morris Dancers Laura Robertson and Elizabeth Spilsbury return for “Lord of the Dance,” there is an intricate scarf dancing number in part one, and the Yuletide Teens return to perform “Children, Go Where I Send Thee”—one of the many songs in the program that functioned as a secret message in the Underground Railroad in addition to being straightforward entertainment. Kadija Ash delivers a charming and humorous performance as Mama Rina. The love story that wraps up in Part Two is also quite touching, though I won’t say anymore since it is a bit of a surprise.

The Washington Revels Jubilee Voices are back with the spiritual “Steal Away” in part two, one of the highlights of the show. The audience is treated to a visit from a special Christmas guest and participates in singing “Joy to the World.” There was no “Dona Nobis Pacem” this year, but I don’t blame the Revels for having to abbreviate some of their usual activities. It’s been difficult for all performing arts organizations throughout the pandemic due to so many sweeping changes in the way they have to operate. Andrea Jones Blackford, as Phoebe Revels, has the honor of reciting The Shortest Day. As usual, the program concludes with the “Sussex Mummers Carol.”

The Washington Revels, once again, bring audiences a fun and educational Christmas Revels. The strength of the Revels is their ability to showcase unique aspects of cultures in addition to showing where they may overlap with other cultures in surprising ways. Korey A. London plays a beat on the djembe drum while Abbie Mulberg plays a traditional Welsh melody on the flute—I don’t think many people would consider combining these two, but it works remarkably well! This is the sort of magic that the Christmas Revels excels at. The Christmas Revels are a heartwarming and unique way to kick off the holidays. Long-time Revels fans will be pleased with this year’s show. If you’ve never been, I recommend giving the Christmas Revels a try—it never hurts to explore starting a new holiday tradition. 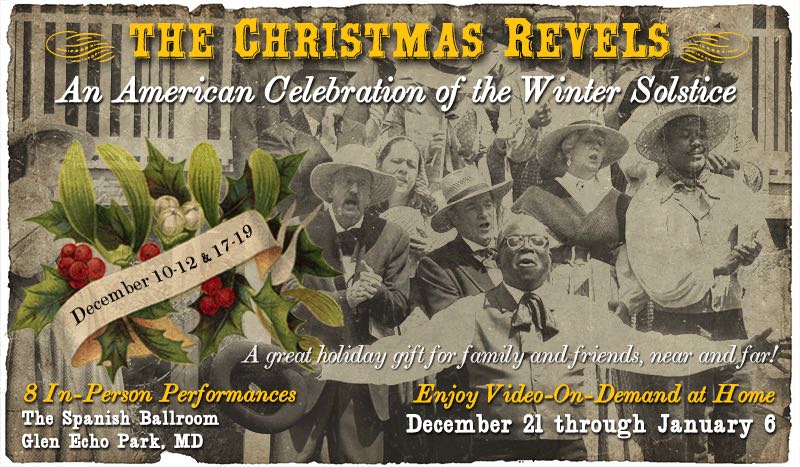 The Christmas Revels: An American Celebration of the Winter Solstice plays in person through December 19, 2021, at the Spanish Ballroom at Glen Echo Park – 7300 Macarthur Boulevard, Glen Echo, Maryland. The production will begin streaming on December 21, 2021, and will remain available through January 6, 2022. Tickets to the live and streaming performances can be purchased online.

The online program is here.