When the Broadway production of Company, written by Stephen Sondheim (music and lyrics) and George Furth (book), premiered in 1970, it was nominated for a record-setting fourteen Tony Awards and won six. But rather than presenting a remount that’s completely faithful to the acclaimed original, the new revival at the Bernard B. Jacobs Theatre, directed by Two-time Tony winner Marianne Elliott (War Horse; Angels in America), takes a current female-centric look at the themes of dating, marriage, divorce, and friendship (and cocktails!) in Manhattan, by switching up the genders of the characters and setting it in the present time (which was done with Sondheim’s approval, to keep the show fresh and contemporary), replete with cell phones and selfies.

The imaginative concept musical is comprised of a series of short non-linear vignettes that take place in the mind of Bobbie (here changed from the originally male Bobby), a single woman whose friends have planned a surprise party, which she evades, to celebrate her 35th birthday. Feeling the pressure of her age, her unmarried status, and her inner circle of five couples questioning why she remains free of commitment triggers memories and surreal visions of the dysfunction that comes with settling down, and with settling. And though there have been updates to the central character and theme, it still feels like something that would have been more of an issue in 1970 (at the incipience of the Women’s Liberation Movement) than it is today. Is this kind of emotional torment still being inflicted on independent women by themselves and their besties in NYC in 2021? It is in this over-the-top comedy that considers the worst of attachments and the psychological drama that comes with trying to decide what’s best, as expressed in the equivocal lyrics of Sondheim’s iconic “Being Alive.”

Though much of the humor and many of the embattled and meddling characterizations seem to me old fashioned, the laughs keep coming, as Bobbie and company move through scenes of domestic bickering and dissolution, pre-marital cold feet, drinking and getting high, inappropriate flirtations, dating three Mr. Wrongs, and more, captured in such expressly ambivalent Sondheim songs as “The Little Things You Do Together,” “Sorry-Grateful,” “You Could Drive a Person Crazy,” “Marry Me a Little,” and “Side by Side by Side.”

Backed by a top-notch fourteen-piece orchestra conducted by Joel Fram (with music direction and supervision by Fram and orchestrations by David Cullen), the lively cast is led by Tony and Grammy Award winners Katrina Lenk as Bobbie and Patti LuPone as her critical and vitriolic friend Joanne. While Lenk’s performance and vocals tend towards the superficial and lackluster, LuPone’s acidic portrayal is both sidesplitting and insightful; her climactic face-off in a club with her husband and Bobbie (with the priceless little pointed detail of pouring Bobbie’s mostly empty drink into her own glass) and spot-on blockbuster delivery of the judgmental “Ladies Who Lunch” steal the show.

Other highlights include Claybourne Elder’s hilariously deadpan portrayal of Bobbie’s not-too-bright but extremely attractive self-effacing dumb-blond date Andy; Matt Doyle’s funny and flawless delivery of the fast-paced “Getting Married Today” as the reluctant, neurotic, and panic-stricken Jamie (a gay reworking of the previously straight female character Amy); Christopher Fitzgerald’s stoned but doesn’t know it David; and the riotous Jennifer Simard as the outspoken Sarah, who constantly calls out her husband and herself for their vices of drinking and overeating, physically challenges him in a contentious jiu jitsu match, and then still wonders why Bobbie isn’t married.

Bunny Christie’s set and costumes and Neil Austin’s lighting provide a post-modern mix of sleek neon abstraction with the characters’ everyday reality, and choreography by Liam Steel contributes to the humor and energy of the show. Despite any perceived shortcomings in this updated version, it keeps Company and its legendary music alive and available to the legions of Sondheim fans who treasured the original groundbreaking production or were too young (or not yet born) to have seen it. 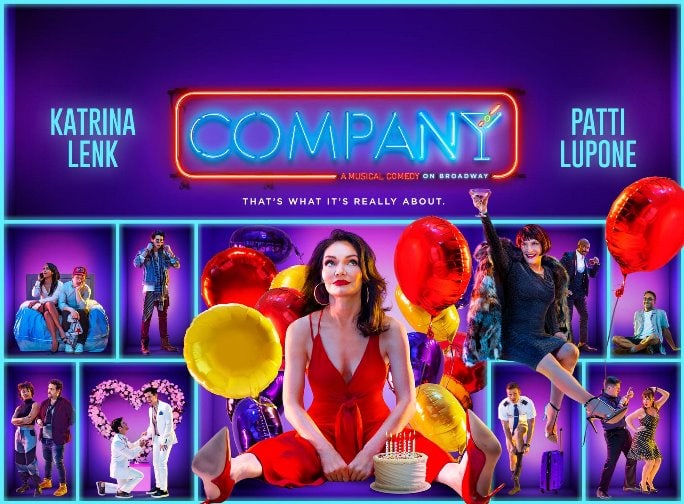