Since moving to the US, British-born and NYC-based Chris Lanceley from Liverpool, who has appeared on network television (FBI; Blue Bloods) and Off-Broadway, is either “a terrible actor” or “the greatest actor to grace New York City,” depending on which tongue-in-cheek quote you believe from his website. For those of us who’ve seen him in the smash hit comedy The Play That Goes Wrong at New World Stages (many of us multiple times), we know he’s a terrific actor who has the difficult task of playing a bad actor in the role of a dead character, and he does it with sidesplitting aplomb.

An alumnus of the National Youth Theatre of Great Britain, Lanceley graduated from the American Academy of Dramatic Arts in 2010, before joining the Academy Company in 2011. And he’d also like everyone to know that his accent isn’t an issue, so feel free to hire him here and let him keep racking up those well-deserved fifteen minutes of fame, which he’s already exceeded.

Chris took some time during this busy season to answer my questions about the show, his career, and what he enjoys most about the holidays.

Chris: Once in a community theater production I did growing up, the set had a door on it that led to the outside of the theater. None of the actors used the door and it was only part of the set because there wasn’t enough space. On opening night an audience member was running late and rushed through the door thinking it was the entrance to the theater. For some reason they stood there quietly on stage and watched the scene until the house manager checked their ticket and seated them.

People with funny laughs! There’s always one person with an unusual laugh that makes the rest of the audience feel more comfortable laughing at the show! These people are the real heroes.

For me, good comedy comes from drama. The Play That Goes Wrong isn’t a comedy to the characters, it’s a tragedy! Their beloved production is falling to pieces around them and so much of the humor comes from how seriously they’re taking each of the ridiculous things that happen to them.

When I was growing up, I used to draw cartoons based on a popular British comic book called The Beano. I had my own characters, but they’d always go on adventures with the characters from The Beano! I think I even sent my drawings in to them once or twice.

Pride, excitement, and joy. I’m proud of our show and the fact that I get to walk on this stage with these people every night. It will never not excite because this show is never the same twice!

Thoughtful, passionate, and caring. It’s really hard to find an answer to this question without it sounding like a humble brag!

Family and home. Recently I haven’t been able to head home to the UK to be with my family at the holidays, but we always make the effort to connect and spend time together even if it’s virtually. The holidays are a time when I always make sure I have some home here in NYC, British food, television, music. A bit of nostalgia!

A win from Liverpool FC, a couple of video games, and great show on Christmas Night!

I’m rubbish at work/life balance! Theater is so consuming, especially when you’re so in love with the show and what you’re doing all week. It’s even more consuming because as well as playing Jonathan I also understudy the role of Chris. I want to get better at planning meals and taking care of myself and making use of my down time.

No, it’ll go wrong. January 1st I’ll buy my lunch at a deli, not drink enough water, and spend all day scrolling on my phone.

Minced pies. You Americans are missing a trick with those, seriously. I also love roast potatoes; I know I can have them any time of year, but they’re best when they’re surrounded by Christmas dinner.

Outside of my family, going to the football – soccer, fine – and watching Liverpool FC. I’m a big football fan and watching my team play live is like nothing else.

The opportunity. I feel like if I work hard there will always be new and exciting ways to succeed.

I’m really looking forward to my sister’s wedding in May!  It’s been postponed a couple of times already due to the pandemic, so it’ll be really exciting to finally go home and enjoy the wedding!

Thanks, Chris, for not going wrong with this interview! Best wishes for Christmas and the New Year, and congrats on your stellar performance in one of the most hilarious shows I’ve ever seen. 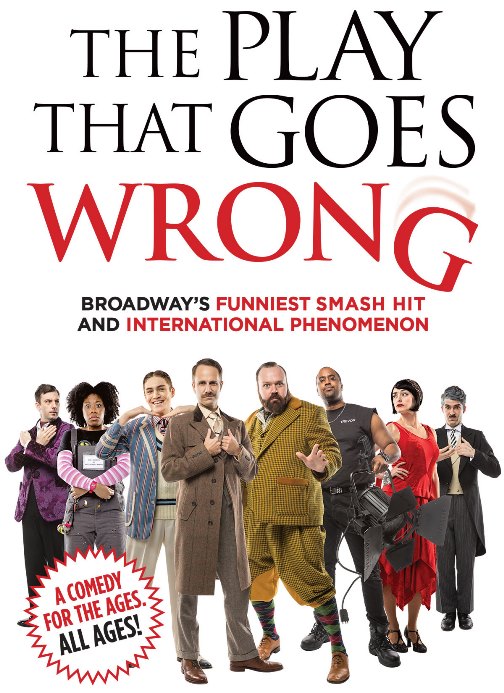 The Play That Goes Wrong plays an open-ended run at New World Stages, 340 West 50th Street, NYC. For tickets, call (212) 239-6200, or go online. All audience members must present proof of being fully vaccinated, along with a photo ID, before entering the building, and must wear masks when inside.