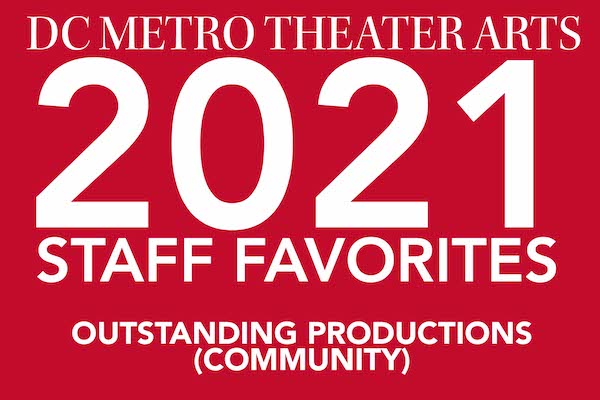 As the year draws to a close, we asked DCMTA writers to think back on the productions that left an impression on them in 2021.

Here are the community theater productions that resonated with our writers this year.

A Black and White Cookie, Silver Spring Stage
Originally programmed as a staged reading with scripts in hand, the October 15–17, 2021, A Black and White Cookie evolved into a minimally produced show under the direction of Jacqueline Youm. It was Silver Spring Stage’s first live performance at its storefront theater in 18 months. Principal performers Melvin D. Smith as Harold, white-bearded Paul Brewster as Albie, and Youm as niece Carol each find a heart center of their individual characters. The supporting ensemble included Robert Howard and Helen Cheng Mao.
Lisa Traiger’s full review

Five Women Wearing the Same Dress, Dominion Stage
Full of snark and sass, Five Women Wearing the Same Dress is packed with observations about women’s lives, bodies, deliberations, hidden secrets, and over-the-top revelations. The show is full of laugh-out-loud moments as bridesmaids wrestle with their demons of regrets past and current and potential future realities.
Debbie Minter Jackson’s full review

Maytag Virgin, The Colonial Players of Annapolis
Audrey Cefaly’s play, about two neighbors in an Alabama town, is a quietly touching drama of intimacy and relationships. Edd Miller does a wonderful job as director, making the physical distance between the actors feel natural. They navigate the stage well and help create the illusion that only the two of them are there. Laura Gayvert gives an inquisitiveness to Lizzy. Ben Carr plays Jack with an independence that hides deep pain and feelings. After a year of their stage being dark, seeing the Colonial Players stage a full production is a joy.
Charlie Green’s full review

On the Town, Rockville Musical Theatre
Rockville Musical Theatre’s production is absolutely top-notch, succeeding in every aspect of a show that is demanding of its cast and staff at a professional, let alone community, theater level. Watch Award judges should be watching. On the Town, written when its creators were in their mid-20s, is all about youthful energy, as the sailors do their best to squeeze every bit of life out of their short time in New York. World War II is in the background, but the show’s sights are fixed on the joy of living this day — joy that the Rockville Musical Theatre production abundantly gives to the audience.
Bob Ashby’s full review

The Mountaintop, Rockville Little Theatre (streaming production)
The Mountaintop by Katori Hall, presented by Rockville Little Theatre in partnership with the City of Gaithersburg (Arts on the Green), takes place at the Lorraine Hotel in Memphis, Tennessee, the night before the assassination of Dr. Martin Luther King Jr. on April 4, 1968. In RLT’s virtual production of The Mountaintop, Robert Freemon’s Dr. King is clearly exhausted and doubting his own mission. He’s in a small hotel room, with orange beds and spartan décor. He paces back and forth, trying out phrases for a speech and checking the phone for listening devices. He is joined by the spirited and charming Camae (Zenia McPherson), a maid who brings him coffee and shares her Pall Malls. Both are charismatic, and both are on edge. It’s a beautifully produced and performed production.
Sophia Howes’ full review

The Revolutionists, Colonial Players of Annapolis
Directed by Jennifer Cooper, this French Revolution-era exploration of the lives of women is affecting and illuminating. The Revolutionists opens on the apartment of Olympe de Gouges, a writer and social activist, played by Mary C. Rogers. As the first act proceeds, we are greeted by two figures who loom large in French history: Marie Antoinette (Ryan Gunning Harris) and Charlotte Corday (Carey Bibb). The fourth character is Marianne Angelle — played by the stunning Samantha McEwen Deininger — who did not exist in fact but is a composite character representing free Black women on the island of Saint-Domingue. The acting and content are a highlight of this production. There is much else to love here, especially the set by Richard Atha-Nicholls and costumes created by Amy Atha-Nicholls. There are a number of technical effects that utilize projections. Designers Wes Bedsworth and Bill Reinhardt have done an excellent job of utilizing the technology available to them and the 360-degree space in which they are working.
Darby Dejarnette’s full review

The Wizard of Oz: A British Panto, The British Players
Audience participation isn’t just suggested in British Pantos; it is delightfully mandatory. The British Players’ production of The Wizard of Oz was a top-notch production and a fun, loud, and raucous way to experience theater. Written by Emma Houldershaw and Samantha Cartwright, this is not the musical version of The Wizard of Oz that you have likely seen on stage or screen. Yes, it has songs, and yes, your favorite characters are there — including Dorothy and Toto, the Lion, the Tin Man, and the Scarecrow — but they are joined by an array of additional characters who amp up the humor of the show. Kudos are due to Director Nicola Hoag and to the entire cast and crew for this top-notch production.
Nicole Hertvik’s full review

Wait Until Dark, Little Theatre of Alexandria
The Little Theater of Alexandria (LTA) shows that good acting and taut direction can continue to fuel an entertaining production of Wait Until Dark, a 1960s thriller by Frederick Knott. Mel Gumina brings a consistently high level of energy to the lead role, Susy Hendrix. Any good thriller needs a villain, and Harry Roat (Adam R. Adkins) is as villainous as they come. Roat’s henchmen in the criminal scheme — the MacGuffin driving the plot is the search for a heroin-filled doll — are Mike Talman (Brendan Quinn) and Sgt. Carlino (Brendan Chaney), a couple of down-on-their-luck petty crooks. Director Heather Benjamin has created a taut and suspenseful production. LTA’s technical work is up to the group’s well-established standard. The realistic set, designed by Julie Fischer, pictures a quite high-ceilinged basement apartment, with frequently used stairs coming down from an upper entrance (footfalls on the stairs are an important plot device at times).
Bob Ashby’s full review

Ovations Theatre
Special mention to Ovations Theatre for continuing to grow during COVID and producing high-quality productions featuring talented young performers. Ovations’ work provided a much-needed outlet for teens in 2021. Under the leadership of founder Darnell Morris, productions including Rent, Ragtime, Beauty and the Beast, and American Idiot featured stellar sets and costumes, and strong performances from Ovation’s young performers who are gaining a strong education in musical theater history and performance. In addition, Ovations grew into a permanent performance space, “the Harriet,” in Gaithersburg, Maryland — a challenging milestone for a growing theater company even if COVID were not a consideration. Nice work, Ovations!
Read about Ovations Theatre