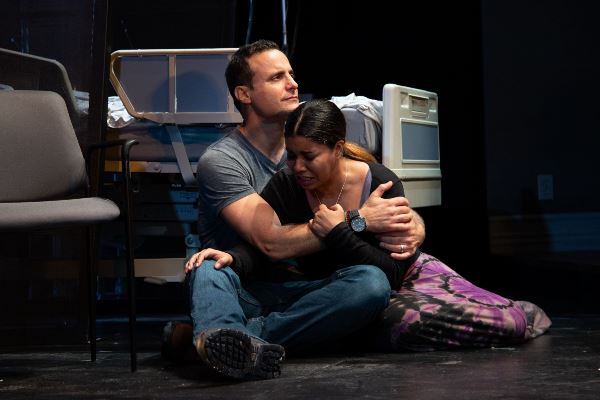 Winner of the TRU New Voices Award in 2018, Jasper, written by Grant MacDermott and produced by Yonder Window Theatre Company, is now making its powerful world premiere in a limited Off-Broadway engagement at the Pershing Square Signature Center. The heartrending human drama, set in the present in NYC, examines the impact on a couple dealing with their eponymous eight-year-old son’s chronic illness, in ways that put them at odds with each other and could ultimately threaten their marriage.

Directed with full-out emotion and psychological insight by Katie McHugh, the intense three-hander is delivered with affecting realism, pain, and poignancy by an empathetic cast that believably captures the distinctive personalities of the distressed parents and their conflicting reactions to the agonizing situation – a situation that is compounded by the father’s undisclosed chance encounter and growing friendship with a stranger on the subway, which gives him a much-needed escape but exacerbates the strain on their relationship when his wife discovers the truth.

Dominic Fumusa stars as Drew, a fundamentally kind and pleasant man who loves his wife and son, and tries his best to support them, but questions the quality of Jasper’s life (expected by his doctors to have died by the age of one), as well as hers and his own. Jessica Pimentel’s Andrea is a bundle of nerves and conflicted feelings, as she navigates life and family after leaving her job to take on the full-time role of Jasper’s primary caregiver. She insists that she’s happy and hopeful, occasionally dancing and joking with her husband and tenaciously pursuing experimental treatment programs for their debilitated boy. But more often she explodes with anger, suffers from exhaustion, and has largely withdrawn from conjugal relations with Drew (who would like her to consider having another child), until they find a brief passionate moment to be together (intimacy direction by Judi Lewis-Ockler) before another emergency with Jasper demands their immediate attention. Both actors are deeply moving and relatable in their outstanding three-dimensional portrayals.

Rounding out the excellent cast is Abigail Hawk as Shayla, a working professional and single mother with a four-year-old son named Tyler (both he and Jasper are central to the plot but remain unseen on the stage), who unexpectedly connect with Drew on the subway and continue to meet, providing moments of respite for him and a vision of what fatherhood could be like with a healthy child. He helps her, plays with him, and bonds with them, but lies to the honest and increasingly trusting and invested Shayla about the realities of his family, and to the suspicious Andrea about where he’s been, who he’s been with, and how he’s been enjoying his time away from the pressures of their unremittingly stressful life. Hawk’s performance is engaging and animated, though some of Shayla’s actions, as written in the script, defy credibility (most notably, her arrival and interactions with Andrea in Jasper’s hospital room).

The emotion-filled acting is supported by an equally expressive artistic design. Costumes by Michael Gianfrancesco readily identify the characters’ positions in the casual clothing of the stay-at-home mom Andrea, the smart outfits of the professional Shayla, and the sturdy boots, jeans, and pivotal sweatshirts of construction worker Drew. His set also effectively conveys the messiness of the central apartment of the couple, who have little time to clean while caring for their son, and easily shifts to side scenes in the subway, the park, and the hospital. Music and sound by John Gromada, and lighting by Robin A. Paterson, amplify the mood of panic triggered by Jasper’s medical crises, with silhouettes of his parents’ desperate attempts to keep him alive in the background.

Jasper offers a potent examination of the inconceivable stress on a marriage caused by the hopeless medical condition of a beloved child, with a surprise ending that leaves you wondering what the future will hold for the estranged couple. It is profoundly touching and thought-provoking, eliciting your compassion for the characters and contemplation of how you would handle a similar situation if faced with it in your own family. It’s a play that makes you care and think.