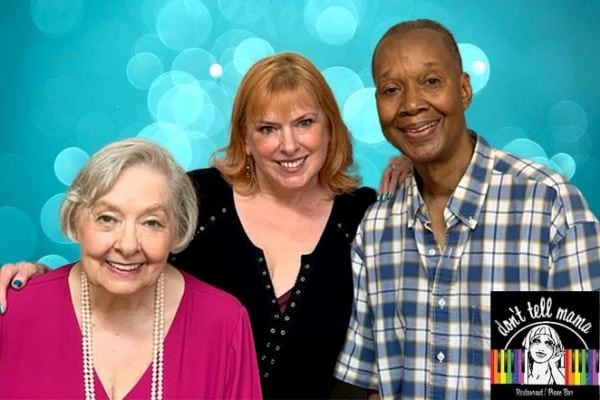 What could be more universally relatable in an intimate cabaret act than an underlying theme of human relationships? In Vangari: Funny You Should Ask, playing at the musical-comedy duo’s home away from home at Restaurant Row’s iconic Don’t Tell Mama, Evangeline (Vange) and Ariana (Ari) Johns focus on their close-knit mother/daughter relationship, on songs that explore the joy, pain, and concerns of romantic relationships, on their working relationships with their creative team of long-time friends and collaborators, and on their warm relationship with the audience, in a new show that includes some of the most requested numbers they’ve been asked by fans to perform from their previous concerts.

Accompanied on piano by master musical director (and de facto third member of Vangari) Darryl Curry, who also provided amusing comments and impressive vocal passages on some of the songs, the pair performed a well-curated set list that highlighted their acting as well as their singing and comedic abilities. In each, the women embodied the characters of the mini-narratives and embraced the sentiments of the lyrics in their costume accessories and props, expressive voices, faces, gestures, and moves. Choreography by Max McGuire and Mark Mindek was suited not only to the content and sentiments of the songs, but also fit to the venue’s small stage. The musical selections were interspersed with introductions to the songs and sometimes funny, sometimes touching, personal banter that affirmed Vangari’s simpatico familial bond, mutual respect, and love. It all flowed smoothly under Christopher Carver’s nimble direction.

The fourteen-part set list of solos, duets, trios, and medleys launched with Kander and Ebb’s apropos “The Apple Doesn’t Fall Very Far from the Tree” from the 1984 Broadway musical The Rink, which had Vangari joking about the people and things they differ on and agree upon; even when they disagreed, it was done in perfect high-spirited harmony. They ended with Otha Young’s tender 1975 country-pop hit “The Sweetest Thing,” written for and recorded by Juice Newton, which brought tears to Ariana’s eyes (and to many of the audience’s), as they held hands, hugged, and profoundly identified with the heartfelt words, “The sweetest thing/I’ve ever known/is loving you.”

In between were powerhouse renditions of signature hits by legendary female Jazz Age artists Bessie Smith (“Take It Right Back” and “Blue Blues,” sung with gusto by Vangie, Ari, and Darryl) and Sippie Wallace (Vangie’s blockbuster solo on the cautionary “Women Be Wise”), all three of which numbered among my own favorites. So did “Marie Laveau,” written by Shel Silverstein and Baxter Taylor, and popularized by Bobby Bare in his 1974 chart-topping country recording, but here given a distinctly Blues-style female perspective in Vangie’s intense vocal and story-telling enactment of the New Orleans Voodoo Queen, in which she humorously, and threateningly, interacted with some of the men in the audience; Milton Drake and Ben Oakland’s “Java Jive,” in which the trio captured the cool and easy vibe of the original 1940 recording by The Ink Spots; and the uplifting encore “Accentuate the Positive” by Harold Arlen and Johnny Mercer, first released by The Pied Pipers in 1944, during the popular Big Band era, which left everyone happy, hopeful, clapping, and smiling at the titular message and at hearing their top requests once again in Vangari’s current show.

Other highlights included Ariana’s doleful delivery of Earl Brent and Matt Dennis’s 1946 jazz standard “Angel Eyes;” Vangie’s version of “Grandma’s Song” from Lee Hall and Elton John’s coming-of-age musical Billy Elliot, sung with a feigned accent; and “A Certain Age” from Ariana and Darryl’s original musical comedy BUZZ, Son of a Bee . . . an artist’s life for me, with a book by Andrew Johns (Ariana’s father and Vangie’s husband), which added yet another significant relationship to the show.

If you missed it in September, you still have one more chance this month to catch the entertaining and heartwarming Vangari: Funny You Should Ask.