In ancient Greek mythology, Hyacinth was the beautiful prince of Sparta and lover of the sun god Apollo. His incomparably good looks also attracted the North Wind Boreas, the West Wind Zephyrus, and many others, but Hyacinth chose Apollo over all of them, angering Zephyrus. One day, as the two lovers were having a discus-throwing competition, Apollo hurled it with such strength that it parted the clouds. Hyacinth ran to catch it, but the discus hit the ground, bounced back up, and struck him in the head, fatally wounding him. Unable to revive him, the grieving Apollo created the eponymous flower from Hyacinth’s spilled blood, thereby bestowing his love with immortality. But there is an alternate version of the story that says his death was not an accident but murder, as Zephyrus, in a jealous rage, conjured a forceful gust of wind that caused the discus to hit Hyacinth, intentionally killing him.

Hunger & Thirst Theatre – acclaimed for reimagining epic tales for present-day audiences – takes a post-modern look at the classic queer love story in Discus, a world-premiere adaptation written by Becca Schlossberg, directed by Jenn Susi, and now playing a limited engagement at A.R.T./New York Theatres through Saturday, March 26. The provocative new indie interpretation conflates the central tale of Apollo and Hyacinth with other characters and episodes from the myths of the gods, current vernacular and word plays with more traditional language, and the established male and female figures with some gender-reversed casting, for a challenging look at the universal themes of class and power, justice and accountability, remorse and repentance, and the possibility to change for the better when inspired by love.

A knowledge of the ancient originals is useful to recognize the modifications and expansions made in the story, but not necessary to get the message it delivers. Performed on a bare stage with a backdrop of draped fabric, a committed cast of seven – led by the engaging Patrick T. Horn as Hyacinth and Philip Estrera as Apollo – brings emotion and character to the roles of the gods and mortals as they compete, dish, confront, and clash with one another, framed in the device of the stricken Hyacinth flashing back on the events and interactions that brought him to the netherworld, in an unresolved state between life and death, signaled by dramatic shifts in lighting (co-designed by Austin Boyle and Paige Seber).

Beginning with the conceit of Apollo hosting a benefit for mortals (or “deadies”) by a line-up of the gods (since they’ve fallen out of favor), we’re introduced to a trio of the Winds – Alexander Settineri as Boreas, Rita McCann as Notos, and Alejandra Venancio as the pivotal Zephyrus – whose chatter relays the backstories and sets the stage for the growing conflicts among the characters (and adheres to  conventional derogatory sexist stereotypes in the gossipy and vengeful attitudes of the now female-identifying roles). Rounding out the cast are Patricia Lynn as Artemis, who harbors deep resentment against her twin brother Apollo for tricking her into killing her lover Orion; and Victoria Fragnito as Hades, the god of the underworld (another gender-reversed opportunity for a non-male performer), who awaits Hyacinth’s soul, despite Apollo’s futile attempts to revive him.

Costumes by Christopher Metzger are comprised of layers of see-through and ornate dress with S&M harnesses for the controlling divinities, in contrast the more earthy clothing and brown hues of the mortals (Horn also makes a brief appearance as Ganymede), and Randall Benichak provides an evocative soundscape of electronic music and eerie rattles, in keeping with the moods of the narrative. Following the alternatingly flirtatious, funny, and disturbing episodes of attraction, antipathy, and the tragic loss of Hyacinth, will Apollo and Zephyrus recognize that they should love, not kill, people and make the transformation from angry and murderous to apologetic and repentant? Or will their egos and supremacy prevent them from changing? Find out in this re-envisioned myth for our times from Hunger & Thirst. 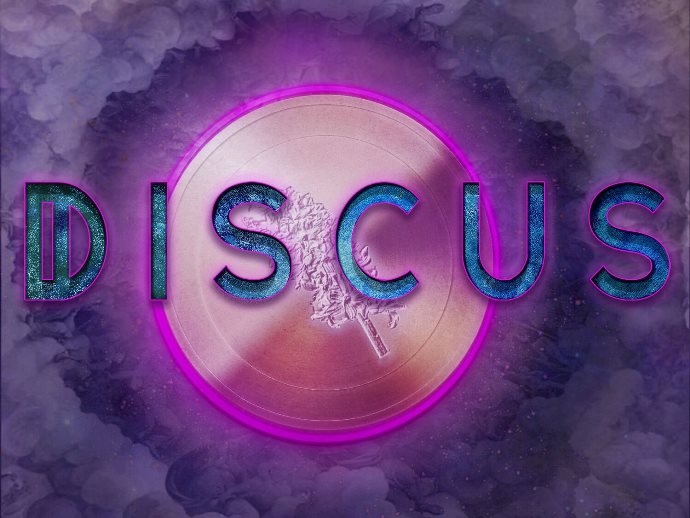 Discus plays through Saturday, March 26, at Hunger & Thirst Theatre, performing at the Jeffrey and Paula Gural Theatre at A.R.T./New York Theatres, 502 West 53rd Street, NYC. For tickets (priced at $20, or $10 with a two-item non-perishable food donation), go online. Everyone must show proof of COVID-19 vaccination and a photo ID to attend the production and must remain masked throughout the entire performance and at all times inside the building.