Nathan the Wise—the sparkling new adaptation produced by Theater J in  partnership with the Folger, is a delicious romp through a moment in history when tolerance actually triumphed. Written more than two centuries after Shakespeare’s Merchant of Venice, Gotthold Lessing’s comedy is a welcome riposte to the earlier drama.

“Nathan is the anti-Shylock,” said Michael Bloom, the writer who transformed the 18th-century classic from the heavy-handedness of previous incarnations into the broad comedy it is today.

The play, set in Jerusalem in 1192, focuses on Nathan, the wealthy merchant who happens to be Jewish; Salah ad-Din, the Muslim ruler who needs money; and the Christian leader, known as the Patriarch, who despises both.

And yes, despite the evil machinations of the Patriarch, it is a comedy. Bob Ashby, reviewing the play in DCMTA last week, describes the ending as something  that feels like “a mashup of Gilbert and Sullivan and Star Wars.”

There are echoes of Shylock, of course, especially in some of Nathan’s speeches. (One in particular, “A Jew is a Jew,” could well be a rejoinder to Shylock’s “Hath not a Jew…?”)

But Nathan, in Bloom’s iteration and Eric Hissom’s portrayal, is more like the great comics of the Yiddish stage, blending wisdom and schtick. (He reminded me of Fyvush Finkel, an American-born actor who played Yiddish-style comics, often sending an audience into fits of laughter by simply twiddling his fingers.)

Maboud Ebrahimzadeh invests the role of Salah ad-Din with a combination of warmth and humanity that are unexpected in a ruler who has defeated a whole crusade. Sarah Corey is the sultan’s sister, a shrewd feminist before it was fashionable and the strategist behind the scenes. (She’s also a mean chess player.)

John Lescault is the villain, a brutally towering Patriarch, who is downright scary when he shouts, “The Jew must burn!” Equally scary, though in a different way, is  Jo Twiss, playing Daya, a supposedly kind-hearted nanny, prepared to betray her benefactor. The star-crossed lovers—Drew Kopas as the Christian Knight and Em Whitworth as Nathan’s daughter—are blissfully besotted.

My favorites, however, are the two Shakespearean fools: Sorab Wadia—an actor imported from India for the role of Al-Hafi, a Sufi mystic who can’t find his soul—and James A. Johnson, the friar, who can’t read or write but manages to save the day by spotting the clues in a book.

I caught up with Bloom on the steps of the Edlavitch DCJCC, where he agreed that the play is quintessentially comic. Lessing, he pointed out, modeled his work on that of Shakespeare, incorporating many of the latter’s devices, including mixed identities and speeches that read as fables.

Bloom, who is primarily a director, has worked at many major theaters around the country. (In New York, his production of Sight Unseen garnered three Obies and was nominated for a Drama Desk Award.) He is also a playwright, having written an adaptation of Jane Austen’s Emma, and is the author of a book on directing.

I asked Bloom about the play’s long gestation. “I first came across it in a 19th-century scholarly adaptation,” he said, responding to my e-mail before the opening. “I was in graduate school at the time. And even though the play was difficult to read, I had a feeling that there was a great story inside.”

Over the years, he periodically took up the task of writing a more accessible—and comic—version, but always put it aside. There were occasional readings—one at the Cleveland Play House and another at Mosaic—but the play itself was not fully formed. It wasn’t until this production was definite that he began the rewrite in earnest.

“I knew the script needed a lot of work,” he said. He wrote five different drafts over four months and continued to make changes right through the rehearsals, working closely with both the director, Adam Immerwahr, and the cast in an effort to clarify the plot and sharpen the characterizations.

Initially, he was drawn to the play because of the idea that a Christian—back in the 18th century—could write anything suggesting that all faiths were equal. “Now,” he added, “with the rise in racism and return of antisemitism, it is a deeply relevant play.”

Adam Immerwahr, Theater J’s Artistic Director, agreed. So did Karen Ann Daniels, his counterpart and partner-in-production at the Folger Theatre, now closed for a major renovation. 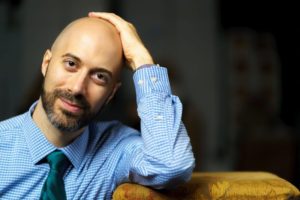 “This is the first truly multicultural play in the canon,” Immerwahr told me in a telephone interview earlier this month.

“Nathan the Wise celebrates how similar we are. It accepts the idea of multiple truths, and it charts the path to tolerance. Not surprisingly,” he added, “the play was banned by the Nazis during the Holocaust. That resonates today.”

There were problems, however. One was the difficulty of mounting an 18th-century play when few directors had any experience with the genre. Immerwahr, however, had actually worked on several plays of that period at the McCarter Theatre. “I was convinced that we could do it.”

A more serious issue was the play itself. Written in a stilted German, it required more than mere translation.

“We knew about Michael Bloom’s adaptation of the play, so we contacted him immediately. What we learned was that his version was written in a modern idiom, superficially finished but incomplete.”

The next step was collaboration with the cast. Bloom, Immerwahr, and the actors sat down at the same table and spent one full week studying the play line by line and looking for new meaning.

“The play is incredibly complicated,” Immerwahr continued. “We found numerous hints, buried in the text, suggesting motives. It was an organic process. Actors, it turns out, are the real experts when it comes to understanding their roles. They create their own mental maps, and we followed their direction.”

There were changes every day. “The last four weeks of rehearsal were particularly exciting—a demonstration of what can happen when actors and writers literally work together,” he added. “The challenge was finding the right tone, the right balance of old and new.”

In addition to the teamwork between writer and cast, the two theaters enjoyed a rare multi-level collaboration, affecting both artistic and business decisions.

“The Folger’s artistic staff was involved in everything, from the choice of the play at the beginning to its casting and rehearsals,” Immerwahr said. On the business side, Folger has sent thousands of its subscribers to Theater J through a special three-play offer. Folger has also sponsored discussion events, balancing the J’s in-person efforts and demonstrating that there are many ways to engage an audience.

“The J is entering a new phase, with a huge adult education program that actually grew out of the pandemic. On stage, we’re rediscovering Jewish masterpieces—many long-forgotten or never translated into English—but we’re looking ahead too. We’re commissioning 11 new plays,” he told me.

“We’re particularly looking at plays that depict Jewish life beyond the world of Eastern Europe. We want to expand the range to embrace a world that is ethnically and racially diverse.  Like Nathan’s,” he concluded.

Running time: Two hours and 15 minutes, including one intermission. 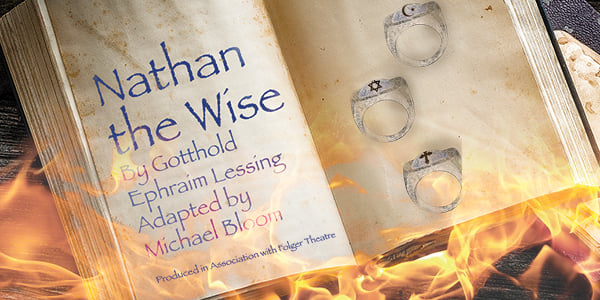 The program for Nathan the Wise is online here.

COVID Safety: In accordance with the Edlavitch DCJCC policy, all individuals will be required to show proof of full vaccination each time they enter the EDCJCC by presenting either digital documentation on a smartphone or a physical copy of their vaccination card. Individuals with medical or religious exemptions to vaccinations will be required to show proof of a negative COVID-19 PCR test taken within 72 hours of their arrival to the EDCJCC. All patrons in the Goldman Theater will be required to wear masks. Only performers and guests invited onstage may be unmasked. Masks are optional but encouraged in the Q Street and 16th Street lobbies, hallways, and other public spaces. Theater J front-of-house staff and volunteers will continue to wear masks. For more information, visit Theater J’s COVID Safety Guidelines.