A musical quest for fire among prehistoric tribes, one man’s dark battle against trickle-down economics, a lesbian couple’s comic subversion of Victorian-era mores, and a modern mother’s struggle with mental illness and a family in crisis. These are the stories Dominion Stage will present in our 2022/23 season, the 73rd consecutive year of performances by one of the Washington area’s longest-running community theater companies. 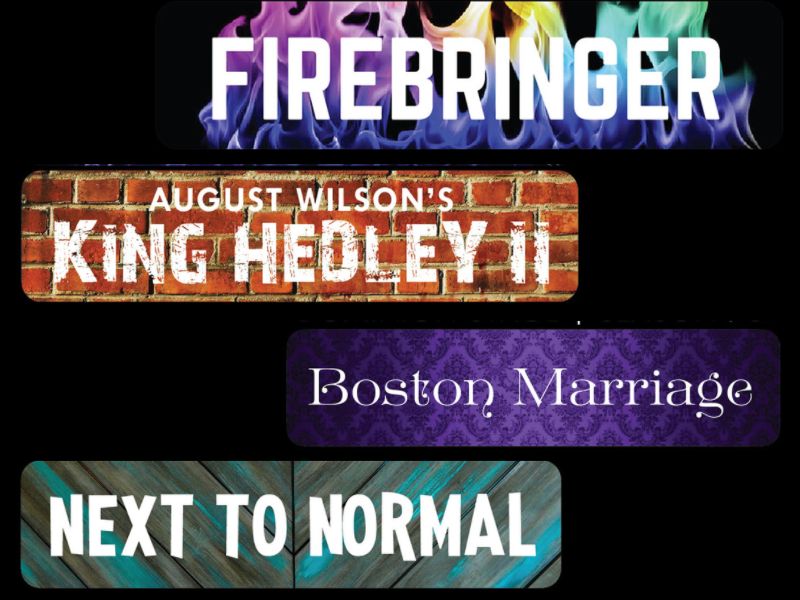 Season 73 begins in August with the COVID-delayed Washington-area premiere of the musical comedy Firebringer — playing August 5 to 20, 2022 — with music and lyrics by Meredith Stepien and Mark Swiderski and book by Matt Lang, Nick Lang, and Brian Holden. In the true spirit of “the show must go on,” director Michael Page has retained nearly all the cast and crew of the original production that was within weeks of opening in January 2022 when the omicron variant forced a shutdown. “We’re incredibly excited to have a second chance to bring this show to the stage,” says Page. “The dedication of this team is amazing. They love this show, and they cannot wait to perform it for our audiences!”

Firebringer is the tale of Jemilla the Peacemaker, the wise leader of a tribe of cave people. She has taught her people to express themselves, rather than bashing each other’s heads with rocks and eating each other’s babies. But one member of the tribe doesn’t seem to fit in: Zazzalil. She’s always trying to invent things to make life easier… for herself. While hatching her latest scheme, Zazzalil stumbles upon the most important discovery in history, one that will pit her tribe against woolly mammoths and saber-toothed tigers and will change the world forever.  She’ll travel from omega to alpha and become… the Firebringer!  Hypable.com says Firebringer “incorporates themes of feminism and politics while still being as fun, goofy, and creative as ever.”

In October 2022 is August Wilson’s King Hedley II, the ninth of Wilson’s acclaimed ten-play American Century Cycle, and possibly the darkest and most powerful of the series. Set in the Pittsburgh Hill District of 1985, this Tony-nominated play tells the story of King Hedley, an ex-con attempting to rebuild his life by starting a family and selling stolen refrigerators so he might eventually buy a video store. The play comments critically on the supply-side economic theories of the day, examining whether their stated aim of providing trickle-down benefits to all Americans truly improved the lot of urban African Americans. The New York Times calls August Wilson’s King Hedley II “grand [with] some of the finest monologues ever written for an American stage, speeches that build gritty, often brutal details into fiery patterns of insight…. You may feel the scorch of lightning.”

Completing the season in April 2023 is the rock musical Next to Normal, with book and lyrics by Brian Yorkey and music by Tom Kitt. The story centers on a mother who struggles with worsening bipolar disorder and the effects that managing her illness has on her family. Winner of three 2009 Tony Awards, including Best Musical Score and the 2010 Pulitzer Prize, Next to Normal was also chosen as “one of the year’s ten best shows” by critics around the country, including The Los Angeles Times, The Washington Post, Rolling Stone, and The New York Times.

Specific performance dates for all Season 73 shows will be announced soon. Dominion Stage performs primarily at Gunston Theatre II, 2700 South Lang Street in Arlington, VA, and is supported in part by the Arlington Cultural Affairs Division of Arlington Economic Development and the Arlington Commission for the Arts. For more information on Dominion Stage, including the current production of the musical comedy [title of show] — playing May 6 to 21, 2022 — go to dominionstage.org/