Inspired by the canonization of Joan of Arc in 1920, almost five centuries after her martyrdom in 1431, Irish playwright and activist George Bernard Shaw created his fictionalized historical tragedy Saint Joan, first performed at Manhattan’s Garrick Theatre in 1923, and published the following year. It chronicles, through six detailed scenes and an epilogue, the French teenager’s divine mission, upon hearing the voices in her head of SS. Catherine, Margaret, and Michael the Archangel, to lead her country’s troops in defeat of the English invasion of France during The Hundred Years War, concluding with her capture and sale to the enemy, conviction for heresy by an Inquisition panel, and sentence of being burned at the stake immediately upon receiving the men’s verdict.

Now in its sixth season, Shakespeare Downtown – a non-profit company based in Lower Manhattan and dedicated to encouraging an interest in classical theater by staging plays in a circular open-air venue by the water (a situation similar to that of Shakespeare’s Globe Theatre in London) – is currently presenting a series of free performances of Saint Joan inside the historic walls of Castle Clinton National Monument at Battery Park. It’s an ideal place for the religious subject, with the heavens above and birds flying overhead (including a white dove that appeared during a scene centered on the eponymous protagonist).

Directed by Geoffrey Horne and led by Andersson (two co-founders of Shakespeare Downtown) in the titular role, the show, set in 1429-31, considers the ever timely provocative issues of faith and honor, pride, popularity, and vengeance, and the positions of women, the church, and the law in society and politics. Andersson’s masterful portrayal of “The Maid” (as the seventeen-year-old farm girl Joan, who chose to wear men’s clothing and preferred being a soldier to a woman, was also known) delivers her steadfast religious devotion, gently persuasive demeanor (in contrast with the rude and angry imperiousness of George Eve’s Robert de Baudricourt and the entitled temperamental childishness of Evan Olson’s Dauphin), determination to lead France to victory, and belief in her visions and cause, even when her closest allies confront, warn, and forsake her. A standout in the supporting cast is Charlie Howard as Jean de Dunois, Bastard of Orléans, Joan’s soldier and friend (until he isn’t), convinced of her spiritual powers and sacred mission, but ultimately unwilling to save her when captured. Howard skillfully brings the thoughts, emotions, and motivations of Dunois to life, rendering them believable, if not, in light of her horrific death, defensible.

With the show’s short rehearsal time, the audience at the performance I attended was advised in advance that some of the actors might need to request line cues, and two members of the cast did repeatedly. Despite those distracting out-of-character breaks, Saint Joan is a compelling work in a landmark setting with an excellent lead performance, offered at no cost to a nightly audience of 250. If you go, and enjoy it, and would like to support Shakespeare Downtown, tax-deductible donations are welcome. 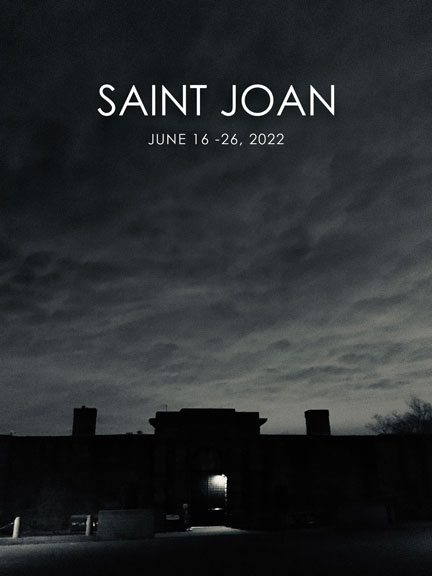 Saint Joan plays through Sunday, June 26, 2022, at Shakespeare Downtown, performing at Castle Clinton, 26 Wall Street, Battery Park, NYC. Tickets are free and available to audiences on a first-come first-served basis at Castle Clinton National Monument, beginning at 5:45 pm, on the date of the performance.