Based on Khaled Hosseini’s internationally acclaimed best-selling novel of 2003 (published in 70 countries, in 60 languages, with 31.5 million copies sold to date, and an Oscar-nominated film version released in 2007), The Kite Runner, adapted and abridged for the stage by Matthew Spangler (with input from the author and Humaira Ghilzai serving as cultural advisor and script consultant), is now playing a limited Broadway engagement at the Hayes Theater. The enthralling production evokes both laughter and tears (and even audible gasps and sobs at the performance I attended) and the smart minimalist design concisely relays the locales and events without detracting from the profound power of the storytelling. It is at once historically epic and insightfully human, and delivered by a consistently superb cast, under the fluid and focused direction of Giles Croft.

Presented in the format of a memory play, the captivating show combines direct-address narration by the main protagonist with re-enactments of the key episodes in his life. His revelatory journey moves from Kabul to San Francisco, from 1973-2001, and traces the guilt that haunts him over a devastating incident that tore apart his closest childhood friendship and motivated his quest for redemption, while also recounting the increasingly tense and violent socio-political situation in his native Afghanistan, from its sectarian, ethnic, and class divisions to the shift from monarchy to republic, the Russian incursion, the brutal advance of the Taliban, and the wave of emigration to America.

To set the cultural tone, there is a five-minute pre-show performance by tabla artist Sadar Nader, who remains on stage and provides segments of music throughout that enhance the moods and scenes of the story. The play, which includes passages in Farsi, then alternates between the expressively told reminiscences of the central character and narrator Amir and impactfully staged episodes of his recollections, with the recurrent theme of the eponymous kite-running uniting the characters and the action, whether joyously bonding, soaring, and celebrating, landing in horrific life-shattering tragedy, or reawakening the happy spirit of the past.

Amir Arison, in a deeply affecting Broadway debut as Amir – the son of a wealthy and resolute merchant in Kabul, who, though of different ethnic and economic backgrounds, has a very close attachment to his long-time servant Ali, and Ali’s son and Amir’s best friend Hassan – leads a stellar cast in fully embracing the poignancy, capturing the cruelty and its after-effects, and interjecting many moments of much-needed humor to alleviate the more painful elements of the story. In another extraordinary Broadway debut, Eric Sirakian tugs at our heartstrings with his irresistible portrayal of the brave and steadfast Hassan, who defends himself and Amir against the hateful bullies, selflessly takes the blame for something he didn’t do, and nobly leaves the only home he’s ever known with Ali, to spare his friend the daily anguish of his cowardly betrayal, even though Amir’s father Baba, for reasons that will later be revealed, begs them to stay. Sirakian appears later in the pivotal role of Hassan’s son Sohrab, who is emotionally distraught over the traumas he has endured but has acquired many of his beloved father’s skills and ideals and ultimately provides the opportunity for Amir to redeem himself.

Faran Tahir as Baba and Evan Zes as Ali are equally compelling in their three-dimensional portrayals of the boys’ fathers. Tahir’s Baba is at times stern and laughably insulting (wishing Amir were more manly like him, preferring that he be a soccer player, rather than the “storyteller” he aspires to be, though proud of his son’s championship kite-flying), at times impassioned (about his disdain for the Russians who invaded his country and anyone of Russian heritage, including the American doctor he refuses to let treat him), and boldly willing to risk his own life to protect the threatened refugees who are being secreted away from Kabul with him and Amir in the back of a truck. He also shows Baba’s softer side in his unending devotion to Hassan and Ali, which makes Amir question why his father isn’t as loving of him. Zes makes for a thoroughly likeable Ali, whose face and demeanor register a range of hilarious and heartfelt reactions, and who always takes the noble and respectful path, even if it makes his own life harder. He also brings humor and commitment to the role of the driver Farid, at first challenging Amir, then aiding him in his mission to make things right.

And so it is with each member of the featured cast, delivering impeccable characterizations and believable feelings and psychology to their roles, including Amir Malaklou as the despicable bully and lifelong antagonist Assef; Dariush Kashani as Baba’s friend and confidant Rahim Khan, who knows the hidden truths of the past and shares them with the adult Amir, in an effort to lead him to the understanding and self-forgiveness he needs; Azida Ghanizada as Amir’s wife Soraya, who encourages his writing and supports his desire to alleviate his guilt about Hassan; and Houshang Touzie as her father General Taheri, who keeps an eye out for his rebellious daughter and approves of her marriage to the smitten Amir (the scenes of his timid first encounters with Soraya are among the funniest bits in the show). Rounding out the fine ensemble are Danish Farooqui, Beejan Land, Christine Mirzayan, and Joe Joseph, each playing multiple roles that contribute well to the staging.

The artistic design is exactly what it should be – evocative but not overwhelming, in a play that reiterates the lead character’s dedication to the art of storytelling. Barney George provides the efficient set and identifying costumes, with transporting sound by Drew Baumohl, projections by William Simpson, musical composition and supervision by Jonathan Girling, and movement direction by Kitty Winter that give the audience and the cast just what they need, without excess, and Charles Balfour’s lighting enhances the tone of each segment and shines a spotlight on the central focus. It all makes for one beautiful and moving production that should not be missed.

Running Time: Approximately two hours and 30 minutes, including an intermission, 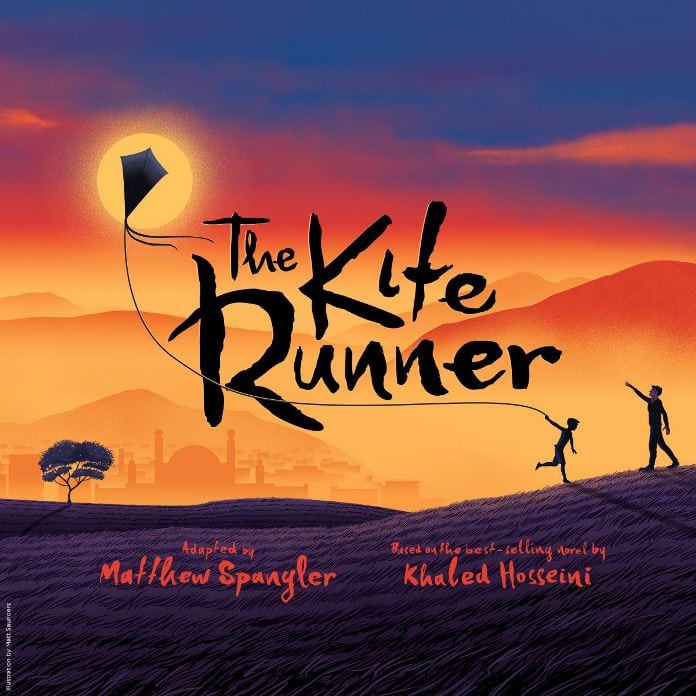