If you wanted to reinvent the human race and retrofix civilization, you couldn’t do better than have a look at Firebringer, a goofy and shrewd musical comedy having its DC-area premiere in an enjoyable production at Dominion Stage. Set in an imagined prehistory when homo sapiens dwelled in caves and had not yet discovered fire, Firebringer is peopled with a charming cast accompanied by a crack orchestra who deliver a lighthearted tuner that not only sends up society but points to a better world.

Alex Bryce has designed a rough-hewn, in-the-round set with a gray ramped platform and gray boulders that might suit Fred and Wilma Rubble of Flintstones fame if they had musical theater chops. Once the ensemble enters and sings in stirring harmony “We Are People Now,” there begins a delightful tribal vibe of “Let’s put on a show.” And the fun fashion sense they display — by costume designer Larissa Norris, with hair and makeup by Rebecca Harris and Mario Font — might well trend one day on TikTok as prehistoric chic.

Right away we learn that this once-upon-a-time clan is female-run. Before Molag the narrator (Melanie McGuin) takes off on a quest to find the edge of the world, she leaves Jemilla (Jessi Scott) in charge. Jemilla’s first official act is to get two males in conflict to chill — Chorn (Edward Nagel) and Smelly-Balls (Glenn Williams) — after which she is acclaimed as The Peacemaker. Later we witness female-female conflict when Jemilla’s rival Zazzalil (Lindsay Capuno) rises up and defies her. The male-male conflict has an emotional-expressivity resolution; the female-female conflict, a Sapphic one. And nowhere in this instructive dawn-of-civilization romp is there anything resembling male-female animosity.

Religious cultishness, however, comes in for a very funny ribbing. The clan’s deity is a duck, cared for by Ducker (Ryan Washington). And the clan believes along with Tiblyn (Sara Alipanah) that she must keep her arms held high because she holds up the sky. Eventually, both superstitions, silly but sacrosanct, get exposed, and the entertaining effect — for anyone exasperated with “alternate facts” — could not be more satisfying.

The work is also amusingly woke. For instance, Zazzalil ascends to leadership because she not only discovers fire (for lighting the night) but also invents the spear (for killing food). Both torches and spears come in handy for fending off a woolly mammoth and a saber-tooth tiger that appear in the form of gigantic puppets by Maria Littlefield. There comes a time, though, when these tribe folk realize that all their burning and slaughtering is precipitating climate change and species extinction.

Throughout, thanks to the inventiveness of director Michael Page and musical director Chad Rabago, there are visual and aural jokes that tickled the audience I was with. At one point, for instance, Molag starts coughing brusquely and Jemilla quickly puts on a facemask. At another, as Molag is trekking off to some tundra, we hear a sample from Frozen.

Lighting designers Jeff Auerbach and Kimberly Crago supply startling lightning strikes and sound designer Matt McNevin brings the thunderclaps. The actors are all mic’ed well for the round, and the balance between singers and musicians is good. Choreographer Colleen Prior conjures a time before dance was invented, and a few props by Helen Bard-Sobola  Alonzo Farley got laughs all on their own.

The harmonious and robust ensemble singing generally bettered the vocal sum of its parts, but there were several standout individual performances. I was taken with the playful chemistry between the outsider Grunt (Cameron Powell) and Emberly (Melanie Kurstin) in their two songs together: one in Act One (“Just a Taste”), a sweet scene of new-found fondness; and the other in Act Two (“Paint Me”), a lovely vignette about the invention of art. When Grunt paints a portrait of Emberly on a rock and shows it to her, she responds, “I like how you see me.” That line was among the moments when a well of wisdom flows in through the loopiest of situations.

Other individual performances to watch for: Glenn Williams brings to Smelly-Balls an amazing physical gift for gestural dance. Lindsey Capuno’s strong vocals as Zazzalil come with stunning conviction. And near the end, Edward Nagel as Chorn, who begins as a monosyllabic schlub, is revealed as an elegant silver-garbed extraterrestrial who sings an operatic 11 o’clock number magnificently.

The clever Firebringer book is by Matt Lang, Nick Lang, and Brian Holden; the often lush score and frequently poetic lyrics are by Meredith Stepien and Mark Swiderski. It’s a well-made musical with an appealing collegiate feel (not surprising — it’s a StarKid production), and Dominion Stage has served the show’s idealistic sensibility well.

The origin of civilization doesn’t get a do-over. It’s been done. But as a metaphorical work of theatrical insight into how humanity could have begun, Firebringer is certainly comparable to Thornton Wilder’s The Skin of Our Teeth. And if you ask me: it’s better. 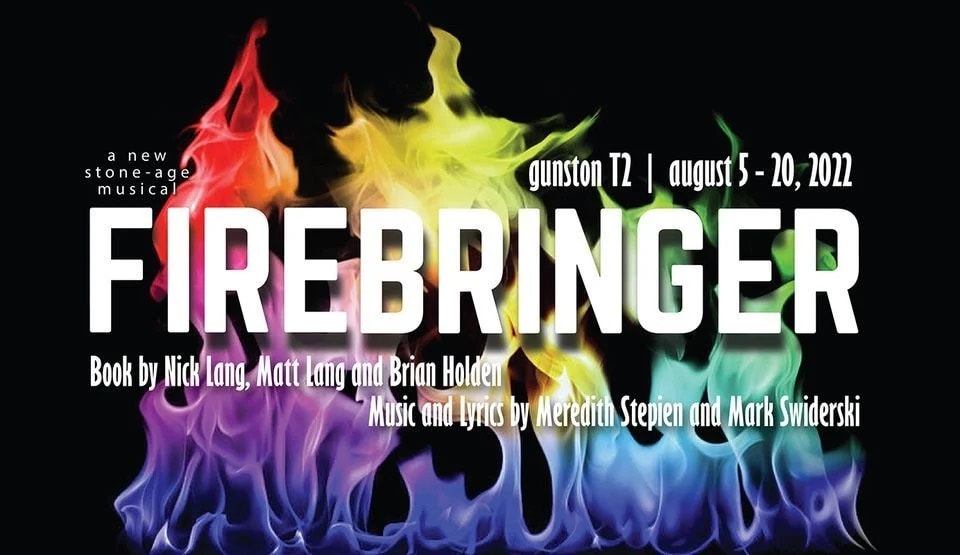 The Firebringer program is online here.