When Anthony Rapp auditioned for a workshop production of Jonathan Larson’s soon-to-be smash hit RENT in September 1994, he was twenty-two years old and working a survival job at Starbucks. Although he arrived late (after a friend’s memorial service), he impressed the young writer (“The future of musical theater”) and his team, was given a song from the new musical to prepare for a callback, and was then cast in the central role of the aspiring filmmaker and narrator Mark Cohen. Rapp would not only appear in the developmental performances, but in the Pulitzer Prize- and multiple Tony Award-winning sensation’s 1996 Off-Broadway and Broadway debuts (as well as in the 2005 movie version).

What was a time of phenomenal professional success and elation for the actor was also a period of devastating loss and emotional struggle, while dealing with the shocking sudden death of his new friend Jonathan on the night before RENT’s highly anticipated Off-Broadway opening at New York Theatre Workshop, and the painful lingering battle of his mother with terminal cancer in his native Illinois, which had him flying back and forth between the two. Those very personal experiences are the focus of the soul-baring solo show Without You, written and performed by Rapp, based on his bestselling eponymous memoir of 2006 (titled after one of the poignant songs about life, love, and death from RENT), and now playing a limited engagement at New World Stages (with an opening night on January 25, commemorating the date of Larson’s passing in 1996, at the age of 35).

Directed by Steven Maler, Rapp’s thoroughly engaging and revealing presentation of his most intimate and profoundly affecting memories makes it clear why Larson was so taken with his talents as both a singer and an actor, as he relays the backstory of his life and the show that would define a new generation of Broadway, his relationships with the loved ones who died, the range of emotions he felt, and the lessons learned in dealing with the heartbreak. Some of those universal messages, to which we can all relate, came from conversations he had with his mother, who was a nurse, about giving permission to the dying to release them from their suffering (“Tell him it’s okay to go”), the compassionate counseling he received from Friends In Deed (a non-profit organization and crisis center referenced in Rent, at the height of the AIDS epidemic, where death was not viewed as a failure but as a natural part of the cycle of life), and the uplifting lyrics and spirit of Rent’s iconic – and uncannily prescient – “Seasons of Love,” which, though set at a funeral in Larson’s show, celebrates the enduring remembrance of lives and the paramount importance of love.

Through it all, Rapp moves around the stage, up and down on the set’s simple metal table and scattered chairs, actively gesturing, addressing the audience directly, assuming the voices and demeanors of the people he recalls, and shifting fluidly from storytelling to singing, as he honors the life and legacy of his friend, the show, and his “Momma” (who didn’t always understand the odd characters he played or his gay identity, but was proud and supportive, a valued member of the audience whenever she could be there, and came to accept who he was – “No different than brown eyes or blue eyes”).

The meaningful songs include R.E.M.’s “Losing My Religion” (sung in his initial audition for Larson) and a selection from RENT (among them, “La Vie Bohème,” “No Day but Today,” “Seasons of Love,” and “Without You”), along with original compositions by Rapp, David Matos, Joe Pisapia, and Daniel A. Weiss (most notably “Spangles of Light and Gold,” adapted from a letter written by Rapp’s declining mother to be hung on the wall of the theater), with orchestrations, arrangements, and musical direction by Weiss, and additional arrangements by Tom Kitt. His resonant vocals are backed by an on-stage five-piece rock band (Clérida Eltimé on cello, Paul Gil on bass, Jerry Marotta on drums, Lee Moretti on guitar, and Weiss on keyboards), in keeping with Larson’s rock opera style.

Rapp’s stirring performance (be sure to bring tissues to wipe away tears of empathy and, ultimately, joy) is supported by colorful and emotive lighting (by Southern), a casual costume design that suits both the ‘90s and today (by Angela Vesco), transporting sound (by Brian Ronan), and an array of projections (design by David Bengali) on the white brick walls of the set that contain real-life photos of the era, the city, the show, and the people remembered.

Without You is at once compelling, heartrending, entertaining, and celebratory. It’s a rich and beautiful memoir/tribute unique to Anthony Rapp that is especially informative for fans of RENT but relatable to everyone. 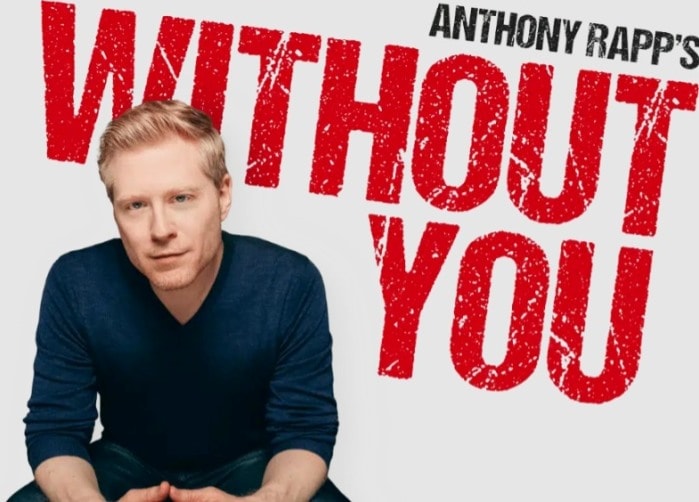 Without You plays through Sunday, April 30, 2023, at New World Stages, 350 West 50th Street, NYC. For tickets (priced at $79-149, including fees;), go online. VIP packages (priced at $399) include a post-show meet-and-greet with Rapp, seating in the first two rows, a pre-show drink, and a gift bag with show merchandise and a signed copy of his book. For information about rush and lottery tickets, click here. Masks are optional but strongly recommended. 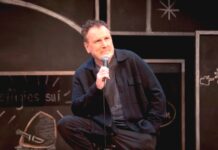