In a make-believe Michelin Guide to musical highways and byways, Avenue Q would hardly rank as more than a Broadway roundabout. It’s a tuneful goof on Sesame Street, peopled mainly by sexually precocious puppets.

But, boy, does it pour on the charm. It is also endearingly universal, say in the way that You’re a Good Man, Charlie Brown is universal.

What a joy it is to see a likable cast of singers and actors embrace it and connect with its silly, sometimes naughty but always generous spirit – as a fresh, young cast at Columbia’s ambitious Red Branch Theatre Company is currently doing.

We caught the opening night October 5th in the intimate but cozy Drama Learning Center on Red Branch Road. Director Jenny Male has been blessed with a dozen or so performers so sweet they make your teeth ache at times.

This little suburban stage places a premium on true performing talent, and talented performers are always lining up to join in. Red Branch has already won one Baltimore theater nod for Best Revival of a Musical with its production of Into the Woods.

Don’t be surprised if this production gets a similar vote from judges.

It’s not always easy to tell here if the actors are wearing puppets on their hands or whether small fuzzy characters have human appendages. But what else is ‘ave-new’?

Zac Brightbill more than fills the bill as Princeton, a recent college grad who takes an apartment way out on Avenue Q while waiting for a direction in life. While Princeton is certainly not the juiciest role in the play (he majored in English), he makes for a good audience surrogate, especially when settling in with a treasured copy of Broadway Musicals of the 1940s.

Princeton’s bohemian cast of new neighbors are something more than stock, thanks to the zestful, relaxed, unself-conscious performances of all the players.

Sherry Benedek gives innocence a kick in the pants as Kate Monster, who dreams of opening a school for other social outcasts like herself.

Josh Kemper wields one of the purest singing voices of the evening as Rod, who doesn’t like the idea that he might be gay. Gavin Shown is fully supportive, both psychically and harmonically, as his sympathetic roommate, Nicky.

Easily getting some of the evening’s biggest laughs is over-sized talent Wil Lewis III as local celebrity ‘Gary Coleman,’ who claims at one point he hasn’t felt that good since he sued his parents.

Erin Branigan is also a hoot as Christmas Eve, an amateur Japanese-American social worker who mostly makes life a bit harder for those around her, especially her recently acquired Peter Pan of a love-bug hubby, Brian, played with guts and gusto by Keith Tittermary.

Admirable support is provided by Cory Jones and Beth Cohen as the ‘Bad Idea Bears,’ and by Karice Parada and Erin Adams.

As sweet and catchy as Avenue Q is with its Tony Award-winning songs by Bobby Lopez and Jeff Marx and puppetry, it is not a kids show. It is unblushing when it comes to sexual acts and relationships. That said, it is eminently audience-friendly when it comes to 30-somethings. Red Branch Theatre Company has laid out a handsome welcome mat.

The professionalism extends from the red brick street set designed by Dan Van Why to the awesome array of original puppet sculptures by Kaitlen Sousa. And special kudos to Lighting Designer Corey Brown, who seems to have a million cues up his sleeve and never misses one of them; and to Musical Director Dustin Merrell, who makes a keyboard and a set of drums sound like 50 shades of Broadway. 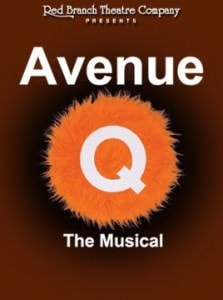