The American Century Theater’s (TACT) vital and esteemed tradition of producing classic American plays of the 20th Century continues with playwright George Kelly’s venerable chestnut The Show-Off. Under the leadership and Artistic Direction of Jack Marshall, TACT has a very commendable reputation for meticulous recreation of American period pieces.

The somewhat convoluted plot mainly revolves around the characters’ various reactions to the “Show-Off” of the title.  As the press release to the show so aptly sums it up: “Egotistical braggart Aubrey Piper blows into the lives of the Fishers, regaling them with fantastic tales of his past success and bright future while winning the heart of daughter Amy The family’s attempts to cope with this master exaggerator,and his endeavors to set the record straight when caught in his own fabrications, made this 1926 parlor comedy a hit Broadway show and twice-produced film.”

From the technical standpoint, there is hardly any theatre group that does a better job of recreating period ambiance. Indeed, the set  is one of the stars of this piece  and is replete with warm brown tones, molding and paneling exquisitely set in place against green walls. Kudos to Scenic Designer Leigh-Ann Friedel and Master Carpenter Jonathan Hudspeth.

The pivotal character of the “show off” Aubrey played by David Gram hits all the right notes of obnoxiousness and slickness bordering on imbecility but his performance is eclipsed by the brilliant multi-layered playing of Lee Mikeska Gardner as Mrs. Fisher. Gardner’s acting is a master class in reaction, interaction and physical authority. Gardner changes moods so fluidly and naturally and is by turns alternately charming, harsh, sardonic and querulous. Especially powerful are her scenes in disagreement with Gram. Evan Crump as Joe and Joe Cronin as Mr. Rogers are the other standouts in the cast.

I heartily commend the fact that Director Stephen Jarrett directs this piece with such respect for each line of text but he overplays his hand with such a slowly- paced production which runs well over two hours and the pauses between lines are much too drawn out. There is nothing wrong with respect for the text but not at the expense of such a long, plodding pace. This piece demands crisp and energetic direction to offset the very workmanlike and solid craftsmanship of the writing.

The American Century Theater’s Show-Off must be seen for its superb performance by Lee Mikeska Gardner and Leigh-Ann Friedel’s  beautiful set. 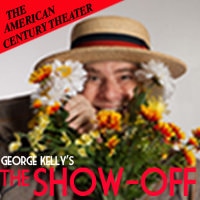