If you were fortunate enough to catch the last performance of Sing the Truth’s legendary tour at The Music Center at Strathmore on Tuesday, January 22, 2013 at 8:00 p.m., you were part of the wildly enthusiastic audience which showed love to three vocal artists whose every word and note inspired, encouraged and soothed our collective spirits. In honor of the spirits of great female artists who embodied “being real,” Angélique Kidjo, Dianne Reeves, and Lizz Wright paid homage to the legacies of Miriam Makeba (a.k.a. Mama Afrika), Abbey Lincoln, Odetta, and others by performing their songs, along with selections of their own. The trio’s 2012 performance venue selected great women of jazz, folk, r&b, and the blues; women they considered among the most important musical heroines of our time.

One could stop to reflect on the many musical accomplishments of Kidjo, Grammy Award–winning Beninoise singer-songwriter and activist Kidjo; and Reeves, four time Grammy Award–winning vocal jazz artist; and Wright’s genre-defying jazz and gospel vocals or one could just lean back, way back and enjoy a non-stop musical feast equal to none other. Opening with a hip grinding syncopation of “Do Your Thing” the trio commanded center stage among shouts of appreciation from the audience, including my own. Wright’s short medley of a traditional secular song, “Amazing Grace” was evidence of her Pentecostal roots as was “This Little Light of Mine.” As is nearly always the case, “Just My Imagination,” a legendary Motown-Temptations tune, arranged by pianist Billy Childs, brought shouts of enthusiastic recognition from the audience.

From the start there was an immediate, intimate connection between the audience and each artist. Responding with enthusiasm to Kidjo’s Afro-funk fusion words, “No One Can Break Your Spirit Unless You Let Them” loyal followers jumped from their seats and danced in the aisles. Feeling the music herself, Kidjo happily joined them, showing off her African dance moves, high-fiving people all the way.

All jazz lovers know that Reeves is at her best when performing live. In this performance her voice soared and seduced rapt listeners with her signature “Endangered Species” and a powerful rendition of “Dreams.”

True to her gospel roots, Wright opened the trio’s rendition of “Both Sides Now” whose haunting lyrics brushed playfully against her love of jazz. Wright acknowledges drawing sparks of familiar sacredness with the unfamiliar, saying “when I first heard what people were calling the blues, I was taken aback, because I had heard that sound all my life. That was how the mothers sang in church.”

Connecting with Bob Dylan lyrics of another song, “Gotta Serve Somebody” near the end, Kidjo, a well-recognized international activist, made a passionate plea for international unity and community, saying no matter what your color, your beliefs, political persuasion, or where you lived on the globe:
[excerpts]

In closing, Reeves provided my first experience of hearing an artist musically introduce the musicians with witty and inspired scatting. It was quite delightful and a memorable ending to a great night of world-class entertainment. 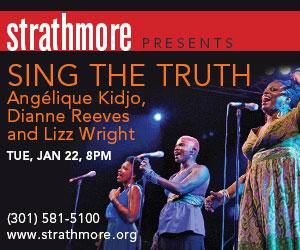