The In Series wishes happy birthday to Mozart with a fresh, modern take on his opera La Clemenza de Tito. This classic story of a conspiracy to take down a leader by a woman scorned is set in a 1960s White House and the clemenza or forgiveness of the title belongs to President Tito (Nephi Sanchez). The question Mozart asks is what this surprisingly noble politician will do when faced with the treachery of his scheming ex Vitellia (Daniele Lorio) and his best friend Sesto (Madelyn Wanner). A major subplot concerns Sesto’s sister Servilia (Laura Wehrmeyer) and her love for the press secretary Annia (Anastasia Robinson).

The two women who fall in love is a charming way to handle the historical “trouser rolls” of Sesto and Annio, or two men’s rolls played by women to replace the more ancient castrati in traditional opera. The fact that four of the main rolls are played by women means that their voices carry most of the opera and it is gorgeous to hear.
The In Series is dedicated to theater and music, particularly embracing fresh approaches to classics and opera. They have been producing a Mozart opera on his birthday for over a decade.

For all the modern touches, like references to fixing DC’s potholes or congress, much of this opera of political intrigue did not need to be updated. For instance, the duet, “Friendship is priceless while others are for sale” continues to be true. Perhaps the only surprising part is how good Tito truly is, with songs like “The only joy that power brings is to give others hope.” Whether he can maintain his integrity is unexpectedly tense to watch when so few leaders have it to begin with these days.

The staging is unique and clever, making use of a set by designer Greg Stevens that consists of four columns on a balcony. Director Steven Scott Mazzola uses the back of these columns as the public side of the White House, so some of the action actually takes place facing away from the audience as Tito addresses the nation and then returns “inside” to the audience for the more private conversations. It makes the simple set into an elaborate space. I’ve never seen so many impassioned moments played facing backstage. It worked well to draw us into these character’s lives. Fortunately, the singers were all so strong it didn’t matter if they faced a wall. The opera was in English and you could understand every word and hear every note. The English adaptation was done by Charlotte Stoudt.

Daniele Lorio (Vitellia) is delightfully evil and seemed equally delighted with the vocal acrobatics of her role. Nephi Sanchez (Tito) has a technically beautiful voice, but it is the emotional life he can bring to his songs like “Is this the face of Tito?” that truly carries the role. Anastasia Robinson and Laura Wehrmeyer as the two lovers bring a sweetness to their songs and they blend beautifully on their duets. Wehrmeyer in particular has a soaring soprano that lifts her solos. Scott Thomas (Publio) has a smooth baritone that’s very powerful in this predominantly female opera. The lynchpin however is Madelyn Wanner, a mezzo soprano, as Sesto. The vocal part is challenging and she has the greatest emotional journey to complete as she struggles with betraying her friend. Wanner was more than up to the task. She’s a powerful singer. There was one song especially that becomes a sort of duet between her and clarinet player Jonathan Yanik. Both treble through the runs that only Mozart could write and few can sing and play.

In the intimate venue of the Atlas Theater, it is also possible to hear each voice in the chorus and the depth of talent in everyone on stage impressed me. Musical Director and conductor Stanley Thurston does a wonderful job of bringing everyone together, blending their voices with the string quartet, clarinet and piano. Sonya Hayes and John Philligin III play violin. Raea Leinster and Rene Molina play viola and violoncello. Francis Conlon takes the piano for all but the 1/27 performance when Carla Hubner, the Founder and Artistic Director of the In Series will take to the keys. On that night, they’ll also sing happy birthday to Mozart. He would have been 257 years-old.

Marianne Meadows did a beautiful job on the lighting design, especially when DC begins to burn, which is shown in subtle, yet effective oranges. The 1960’s costumes by Donna Breslin fit each character perfectly. Vitellia’s fur was a great touch. The costumes especially worked well all together, which is sometimes not the case with period dress. The ensemble onstage presented a powerful picture.

Love and power – two of the most ancient forces clash in this moving and funny opera about the heart of one leader and how much it can stand. The singing is gorgeous; the production is polished and original.

The In Series has done it yet again.!

Running time: Two hour and 40 minutes, with a 15 minute intermission. 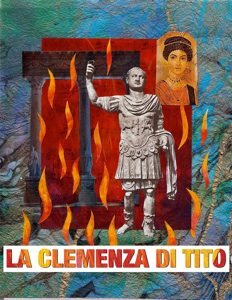